Just read this, and this, and I hope you're doing OK.  Sounds pretty bad.

I hope to be able to get on later.

Thanks!  Luckily, other than a mess to clean up, and a couple of power flickers, we escaped relatively unscathed.

It's been a while since I've seen the ice do that.  The seiches usually happen during the other three seasons, and you don't really see anything other than a substantial drop or rise in the water levels, but once in a while that'll happen, and it's pretty wild when it does.  Unfortunately, or fortunately, depending on how you look at it, it's happening more often due to the lake not freezing over completely as often as it used to.

Just read this, and this, and I hope you're doing OK.  Sounds pretty bad.

The power outages actually more than doubled that by the time it calmed down late this afternoon.  Amazingly, the power did pretty well in my neck of the woods.  It's very often the other way around.

I haven't been out and about yet to see how many trees came down, nor if there was any flooding in the area.  Because the closest village sits in a valley and a substantial Lake Erie feeder bisects it, it's prone to flooding, and sometimes badly.  Still, I didn't see anything about it on the local news, so it's probably fine.

Luckily, overall, we came out of it relatively unscathed.  Just a messy yard due to all of the branches that came down.

For those that aren't aware of this phenomenon, because Lake Erie is so shallow it's very susceptible to what's known as a seiche, which is like what happens to the water in your bathtub when you get in one end, where the water goes kind of gets pushed to the other end, then flows back the other way.   During sustained high wind events, the lake's water level at Buffalo rises, while at the same time it lowers at Toledo.  It eventually evens back out, just like the water in the tub, but when it's most pronounced it's usually like mentioned, as the wind is most often blowing from west to east, or some variation of such.

During the winter, if the lake is only partially frozen over and one of these high wind events hits, it can push ice toward the end of the lake and the entrance to the Niagara River.  Because the ice boom across the entrance to the Niagara River broke from the building ice's pressure, a lot of that ice ended up going into the river.  With the combination of the seiche and the wind driven ice, this is what started happening, primarily on the east side of the river, near its entrance. 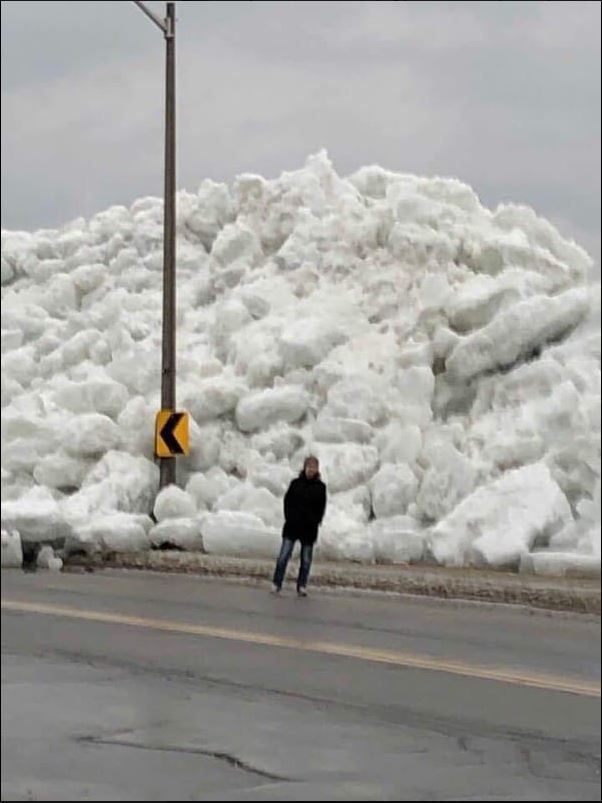 You can actually see this type of thing growing in real time, and there are some videos from the area showing this.  The same type of thing sometimes happens on the southern side of Lake Ontario, though that's driven by the wind only and not a seiche, as Ontario is too deep to have a seiche develop.

Fun stuff.   It just shows you how much power the wind actually has.  Anybody wanna build an igloo?

Ok, so that isn't marshmallow fluff... I'll be on my way then.

Seriously though that is really cool. We just get frozen car doors and windows!

There's a video of this happening in my Weather.com app.

I'd repost it if there were a share button.