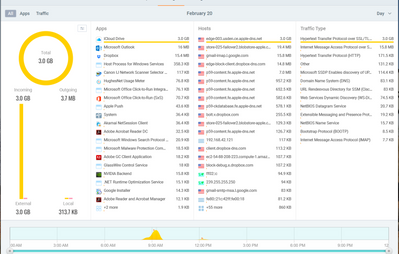 Here is how to disable iCloud. Be sure to read entire article and beware if you decide to transfer files that have already been uploaded to iCloud to your local computer then you are going to eat a bunch of data downloading them. Basically paying twice for them data wise, once when they uploaded then again if you decide to download them.

@When tagging someone who hasn't already posted in the thread, you have to wait for their name to pop up in the box so you can click on it to select it.  Typing the @ symbol brings up the box, then typing the letters in their name should bring it up, though you kind of have to do it a certain way.  What I usually do is type out each letter slowly, like adding a letter after a second or two, and if by the time I get to the end of the person's name it still hasn't shown up in the list of tags to choose from, I slowly start deleting the letters, again using a second or two for each.  Deleting them will often cause the system to list the name.  With Liz, I usually end up getting to the end of her name, and then deleting the z often causes it to appear, which I can then click on to select it.

As for the issue with iCloud.  WOW.  That's a LOT of data.  I've disabled OneDrive, which is the Windows equivalent of iCloud, as I save anything important locally, though I don't have much to save.

I hope BirdDog's instructions and the link he provided help, as I don't know the first thing about iCloud, nor how someone would adjust any settings to stop it from doing what it's doing.

And I was further thinking about that token thing today, and why you'd still be in FAP, and I'm still scratching my head.  I still can't make any sense of it, but I'm sure the reps will be able to figure out what's going on.

Good morning @GabeU, @Liz has not gotten back to me in a bit - haven't had technical support call me either. I will work on the iCloud fix. It's very frustrating that HN advertising continues to tout their 'whole house' connectivity when in TRUTH, you have to turn everything off, disconnect everything, and nothing but a couple of desktops will run on my 30GB service. Our former service, which I now REGRET leaving, Wi-Power, offered 5-7GBS up and 1-2GBPS down, NO DATA CAPS, NO THROTTLING, (WORDS not in my vocaulary until HN) our only problem was that it was buffering at night in the last 6 months. NEVER ONCE had a problem with any device as it usually hung around the 3GB range. HN is awful, just awful and truly feel they should have to modify their advertising because I think it's misleading at best.

BUT, I appreciate you and all the kind tech volunteers who endeavor to assist all of us. Thank. you!

@Liz - will you PLEASE PLEASE go back and read through this post and see if you can help me with speed, being FAP'd while using 5.2GB of data tokens that disappeard and PLEASE get an engineer to contact me after 4PM CST regarding my service?

It's pretty hard to keep up with your ongoing problems but I wonder if you've ever looked at your Hughes hourly usage chart to identify when and how you're burning off so much data allowance?

Like, does it show you have large amounts of upload or download going on during certain hours or all hours? Do you have huge amounts of upload showing over the days of extreme data loss? I wonder if one of your computers may be doing something really goofy like trying to upload/backup 500 GB to some cloud?

Another thing I wonder is if you've completely shut down or disconnected everything from the internet for a while and then had a look at the hourly chart? It should read zeroes for the duration but I remember a time when Hughes initiated a test on my system and forgot to turn it off. Stranger things have happened. 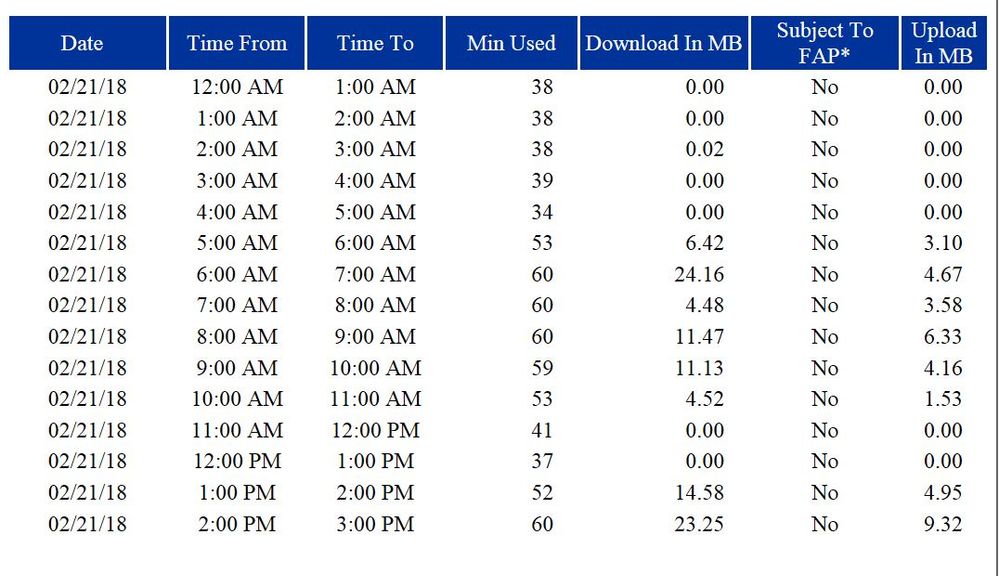 @GW - thank you so much for your response - I did indeed go to the chart you listed and found what I believe to be a dadgum Office 365 update as well as an iCloud issue (which I cannot regulate other than disabling it - I travel quite a bit and use the iCloud to access data and information from iphone, MacBook Pro and my iMac - including contacts and documents). Realizing this now I should never have signed up for HN - with our old rural provider running at about 5MPBS consistently and some traffic at night, all devices and applications were always connected and I never had to spend days/hours chasing things, disconnecting literally everything I could to keep from exceding any limits, there were none.

That being said, I will try disconnecting the system tonight, but since I'm FAP'd it's just going to show 00's correct?

Thank you again for your kind assistance.

Leave your modem on and working. Just unplug all your LAN cables and turn off all the wifi connected devices. Check the hourlies in the morning. If you see anything but zeroes or slight bits of keep alive communication between the modem and network, something is going on with the network or a neighbor.

I think I told you before, there may also be a website you stay connected to that's sucking data. Like the DHL international tracking page can suck down gigabytes a day. I used to stay connected to it when I had incoming freight until I noticed I was losing huge amounts of data and isolated it to DHL. One of the guys here connected to it with some wizardware when I reported this garbage to the forum and this showed the DHL page was refreshing every image constantly and forever. That was almost 3 years ago so I'm pretty sure that discussion won't be in the archives here since it was on the old Get Satisfaction Hughes forum.here.

Thank you @GW for assisting me - I believe by looking at these charts before I was FAP'd maybe we can determine that there's nothing hung up on the system, just a data drain as you can see, I have gone back to glasswire to see exactly what it was but can't actually determine that looking at it hour by hour - I will do further digging. THAT BEING SAID, from 4PM CST through the evening being FAP'd is no different speed than those UN-FAP'd - and I haven't heard from @Liz's engineer that she was going to set up nearly 3 weeks ago. You, the volunteers get a lot of credit, you obviosly beleive in the product and the company or you wouldn't spend your time trying to help. Thanks for helping when you can! 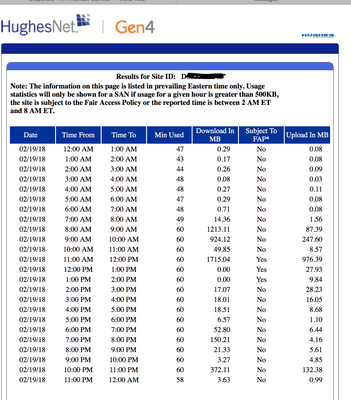 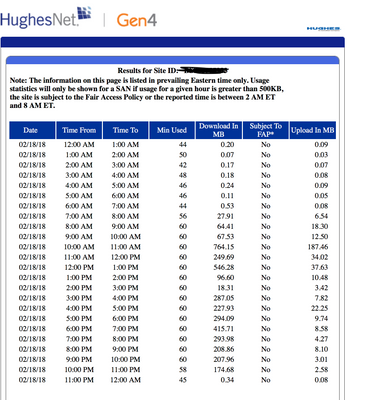 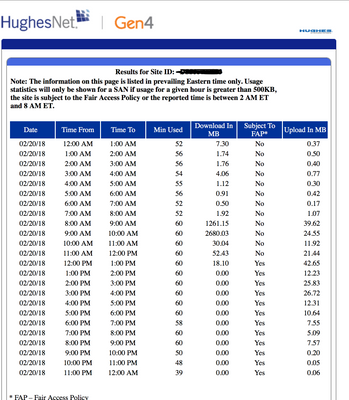 And @GW, @GabeU, @Liz, here's a screenshot of my wildy varying speeds since installation without any resolution. 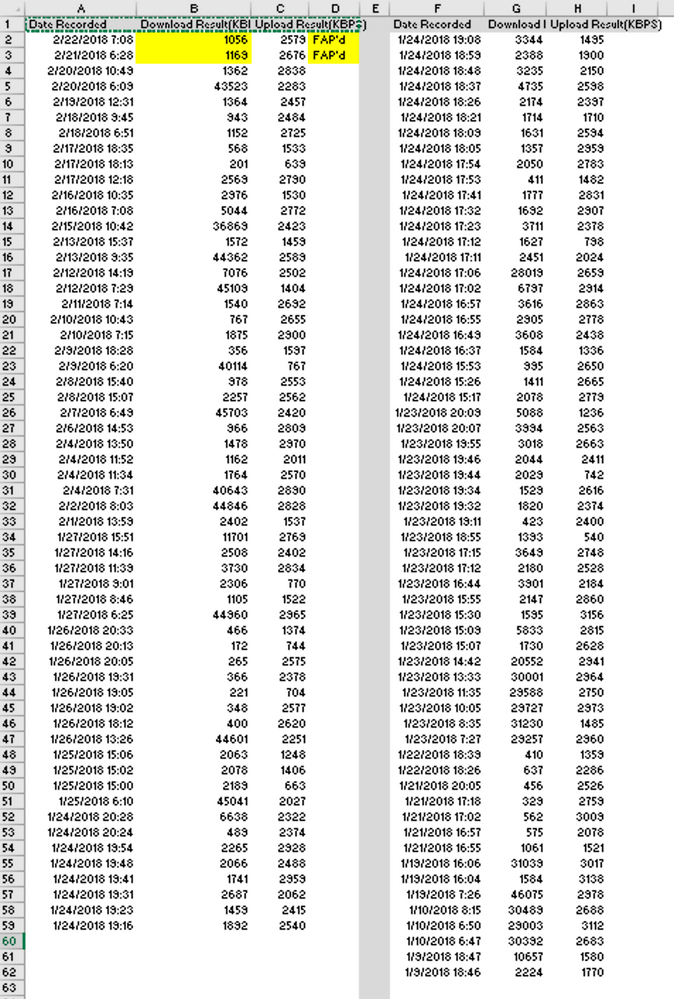