Could We Please Get An Explnation Of What Is Wrong?

There are things that HNS is doing to help customers like yourself who are experiencing very slow download and upload speeds.  I'm not sure where you are located, but in Northern California, we (installing dealers) are receiving work orders to repoint customers like yourself off of the Echostar 19 satellite and on to the Echostar 17 satellite.  We are seeing very consistent download speeds around 25 Mbps on this satellite, but not as fast on the upload side.  Still, it will allow you to do all the video streaming you like with no interruption.  I suggest you contact customer support (I know you are probably tired of hearing that) and request that they create a "Defined Dispatch" to repoint your satellite dish to the Echostar 17 satellite (assuming there is a beam from this bird in your area).  They will create this order at your request.  They know which beams are having problems and if yours is obviously one of those beams then we can send a technician out and get you going again.  In some cases, we are also swapping the antenna with the larger .90 meter dish that all customers are now getting installed with.  The bigger reflector will also help with better performance.  These beams that are experiencing these slow speed issues have filled up rather quickly and this is another issue being resolved as well.  Make the call and get the service order initiated to have a tech come out.

IMO, radio communications is half science theory, half facts.  I am sure on ground testing showed exactly what they wanted, but real world tests tend to show different results...  This happens with pretty much everything sadly.

Jupiter II was actively being built, and tested as soon as Jupiter launched, I almost want to say at the time they had the ability to use such spectrum, as OneWeb is rather recent and I am pretty sure the spectrum issue is more recent, so this is potentially an unforseen problem that has occured.  Hopefully Jupiter III with more focused spotbeams on select regions can handle things better and they rework their ideas a bit...  I would think smaller tighter beams would help a good deal...  Instead of having signal A cover X/Y/Q that covers a third of a region, it covers a smaller area of that region (such as using it to cover just X which is half the size it was previously) so they can reuse it and keep flipping the polarity of said signal.  But as I said earlier, theories, wouldn't know for certain unless tested in real world applications.


@Installer - Ya know, we love seeing installers pop up from time to time to give input, as well as what's happening in the field...  Wish you didn't just use the "Installer" name as your name though.  Interesting to hear they are switching to .90 dishes, thought those had been reserved for SME customers?  Either case, it's no better signal wise nor does it really help with speeds IMO.

@C0RR0SIVEyou are wrong on both accounts.  The larger .90 antenna provides a higher Signal Quality Factor (SQF).  This SQF measures what we call the Downlink Energy of the Signal over the Noise (DL EsNo).  A higher SQF will provide a better quality signal.  Business Internet customers in the past have always recieved a .98 meter antenna.  This was becasue it provided a better SQF and allows Hughesnet to reserve different outroutes with more bandwidth becuase of this larger reflector.  That's why the Business Internet plans have much better speeds all around.  Now, we actually went down to the .90 meter antenna in California for all the Business Internet customers because it basically provides the same performance as the .98 antenna and its much lighter.  Hughesnet is now having us install the .90 antennas for ALL of our Consumer installs.  Eventually, when we get enough of these larger antennas in the beam, the overall efficiency will improve for EVERYONE.  We have even begun swapping some .74's for these .90 antennas.  There are also steps being taken as we speak to alleviate some of the traffic in the congested beams.  It won't happen overnight.  It's basically a sales issue that will be looked at very closely.

So we on Beam 55 can call service for a .9 dish install at no charge to us?

.74 Vs. .98 right below, both are peaked out, they get the exact same performance overall.  SQF isn't much if any higher most of the time. 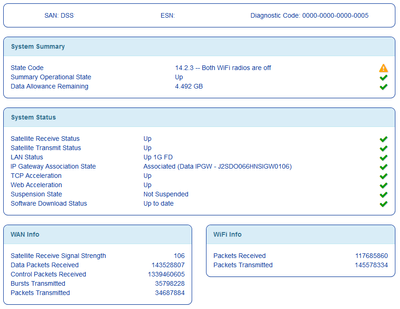 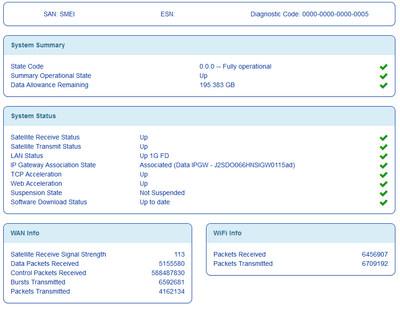 BTW, this is pretty much center of beam, with both units properly peaked out.  I haven't noticed any additional outroutes either between either system, nor have I noticed a performance increase between either unit at any time.


The only real benefit long term is if Hughes can somehow get more spectrum to use, and to load-balance users that can see both birds, between each one.  The larger dishes are probably for two reasons.  Overall cost/Logistics, as well as some beams having very low signal strength, such as 005.  Don't really care what anyone says, but, the .74 IMO has the same performance as the .98.  In theory it should be worse than the .98, but it really isn't in my experience.

There is a reason that SME accounts perform better.  The first is the larger antenna.  So if you think the .74 performs the same as the .90 or .98 you are lost.  Second, HNS reserves different outroutes that provide wider bandwidth for Business Internet customers.  So to say that the outroute doesn't make a difference is also wrong.  These are the reasons why we are transititioning in nearly half the country now to the .90 antenna.  There will be an improvement.  Think what you want.  The other main cause of beam overloads is Dish Network.  They continue to install for customer in urban areas thus clogging the arteries even more.  This issue will take a bit longer to resolve.  Once it is, with eveything else we are doing, all of these speed prolems will be gone.  It's that simple.

I think you are confusing Outroute ID with IPGW State...  I have seen both my terminals hit the same outroute ID on occasion, however, the SME IPGW always ends in "AD" which would be an SME only gateway address.

Thanks for the info, I am also on 55 and Liz told me that they are in the process of having the installers get ready to re-point customer dishes to the other satellite to help improve some of the issues. The larger antenna is interesting, not sure which one I have.

Do you think the "fixes" being done over time will also alleviate the slow speeds being seen on the ES19 on a much larger scale than just specific beams?

My speed drops were gradual over the last three months, then about a week before Christmas it was like a switch, and my speeds dumped.  That wasn't gradual.  That was something that changed.

With this said, my speeds are really wacky.  While my speeds show as 400Kbps at testmy.net, I have issues with watching a Youtube vid at 480p (buffering), but if I turn the VDS off I can watch Youtube vids in 1080p without issue, though it doesn't help watching them at 480p.  How much sense does that make?  LOL.  And a two minute vid in 1080p will be fully loaded by the time I'm 25 or 30 seconds into watching it.  At 400Kbps.  SMH.  Goofy.

Within the next couple of days I'm going to try some online streaming through HBO Go, with the VDS off, when my speeds are really low like that.  I'm curious as to what will happen.

My browsing is fine, though.  I'm don't stream, though I did sign up for HBO Go as I want to in the future, so I'm not really concerned with that at this point.  But, again, no problems with browsing.  Just as good as when my speeds were 47Mpbs.

I'm having a similiar issue being that youtube is showing much lower speeds than what I'm actually getting.

During non-fap i was averaging around 8-12 mbps and youtube would still be buffering with the Video Data Saver off at 360p.

And currently im in FAP mode sitting at 1-2mbps and i can't load anything at all. When 1-2mbps should be plenty for 360p still. Im not sure if hughesnet throttle at all on specific sites, but the fact that my network activity on youtube sits at a constant 0kbps says something.