Is there any way I might be able to get one of you to remotely take a look to make sure everything is okay with my HughesNet equipment?  I have a tree that's grown up considerably, and it's difficult to tell if it's starting to be in the way.  My signal strength is good, usually at around 100 or so, but you never know.  I'm able to remove the tree if I need to.

Also, is there anything that can be done to purge my modem or reset it or something to get rid of any old stuff, if that would have any effect, that is.  I'm having a heck of a problem with Facebook, which seems to be singular to me, and it's not my devices, as it's the same on all three of my computers, with each using different AV and browser extensions.  You can see the whole Facebook debacle here.  I just didn't know if maybe there was something with the modem that could be "jogged", so to speak, to maybe fix this issue, as I've tried pretty much everything I can think of, and things others have suggested, as well.  It's only Facebook.  Other sites are fine.  And that's what's odd.

I'm trying to run diagnostics, but your modem is inaccessible right now; is it connected with all the LEDs on?

Oh, geez.  I forgot to leave it plugged in.  I should have taped a sign to it to remind me.

It's now plugged in.

Thanks Gabe. Nothing that I can tell looks out of the ordinary. I made a few adjustments to your modem, one of which was clearing the modem's DNS cache. Please let me know if that makes any difference.

Thanks, Liz.  I appreciate it.

I'll keep an eye on it.  Right now it still seems to be the same, but it will probably take a little while to see if there is any noticeable difference.

OK, I'll ask around to see if anyone else has additional suggestions and I'll let you know.

I definitely appreciate that.

What's really odd is that, it can change from one minute to the next.  For the most part, last night, it was fine.  I was able to open pages in 30 seconds or less.  Then a couple of times it hit over three minutes.  Last night actually seemed to be a lot better than it had been over the last few weeks, but I'd had that happen before, thinking it was finally working again.

There just doesn't seem to be any rhyme or reason to it.  And at times that you'd think it would be better, as in when less people are on, it can be worse, and the same goes for the other way.

It's a head scratcher, for sure, and I don't understand why it's only affecting Facebook, save for maybe the fact that Facebook loads so many things.

Something I started noticing, and which I was able to somewhat show last night, is that it's congestion that seems to be the thing that most negatively affects Facebook.

For example, in the following TID from testmy.net, you can see that, though my overall speed is good, congestion is kicking up a bit (the jagged graph), and it took 112 seconds to finish opening a Facebook page. 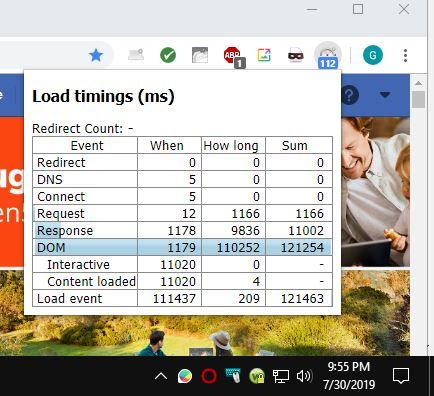 Late last night Facebook was responding wonderfully, with three different pages (main page, HughesNet page, and a group page) taking under 20 seconds to load.  This was each page separately, of course, not all three at the same time.  Unfortunately, I didn't think to take snapshots of the page load times.  On a hunch, I ran a speed test, and this was it, which is showing a nice smooth line (after the goofy thing at the beginning), which means very little congestion.

I have begun to notice a pattern, in that Facebook seems to react terribly to congestion.  I don't have snapshots, other than what's seen above, and what's seen in the other thread, but after years you're able to tell when congestion is kicking up, as web pages load a little more slowly, or they pause or something like that. You just know it without having to have a test to show it.  Still, though, I'll try to get more snapshot examples going forward.

It's funny, though, that when congestion kicks up, pretty much all other web pages I visit just load a little bit more slowly, whereas Facebook is so drastically affected, and even more strange is that this wasn't happening until the beginning of June.  Again, though, it may be because a Facebook page has so many elements to load.  This slowdown has actually caused me to not be able to participate in one of my Facebook groups, as an element of that participation is occasionally having to open a lot of Facebook pages.  Dozens, sometimes.  And, at two or three minutes for each page, or even longer, it becomes far too frustrating to bother.

Again, I'll try to remember to get some snapshots of both Facebook page load times and a speed test or two when it's either kicking up, or working very well, like it was late last night.  Because of currently using Token data, though, it will likely not be until the 5th before I really start digging into it, as I'd rather not run a lot of tests right now due to wanting to use as little Token data as possible.  It's that darn PlayOn Cloud.  I love it, but I download a little too much.

I'm not surprised. If you saw all the little widgets and extra external junk that requires extra hits that are hidden (some layered within other things) inside a single Facebook web page... then add extra congestion latency to it... then if any of it is done by secure (https) means, which is where a lot of web sites are moving...

That's a good observation, I'm glad you caught that. Once you get some screenshots I'll bring it up with engineering so they're aware. Thanks!