Check out these speeds for the past month from HughesNet who promised me at signing that we'd get speeds of up to 25 but not lower than 12mbps!! And they REFUSE to do anything about it. I've been on the phone with them for 5+ months trying to get this issue resolved.   The first three months we had flawless service so I KNOW they can provide good service, but they choose not to anymore... why? I don't know. They refuse to even TRY to diagnose the issue appropriately. Techs just say our speeds are checking out on their end and run some other nonsenseical test and make ever changing excuses about what could be wrong... oh there's a storm in MONTANA!?!  I DON'T FREAKING LIVE anywhere near Montana!!

Well, speeds don't check out on my end and I'm the one PAYING!  Oh yeah... and our month restarts on the FIRST!!!  Why do I have such throttled speeds when I have all the data remaining on my plan on DAY 1!!!

Techs have "escalated" my case to Engineering Department (whatever that is... does HN even HAVE engineers?!)... they say I'll get a call back within 24 hours.  30 hours later I call back because I haven't got a call.  Another promise... another never called back!  This has happened THREE TIMES in the past MONTH!  Have I ever received a call back?  No!  And when the call drops in the middle of a tech support call, do they bother to call me back so we can continue?  No... I have to call them and freaking start over with a NEW tech!  It's just ridiculous!  Where's the C _____ - A _____     L ______  I can be a part of because HN is NOT upholding its end of the contract.  I'm paying for CRAP! 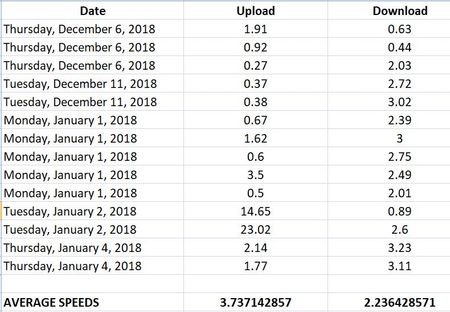 Hello HughesNet... Please fix this issue. We know you can provide service according to the contract we signed... however... YOU are not upholding your end of the contract.

It's funny also that HN forbids certain words to be used in the "community"!  So that it can't be searched and groups formed so that things ACTUALLY get fixed!

It's April 21st , Since December 30th I'm getting same type of numbers as you. had the techs here afew times , no change. I should have stuck with high bills and DSL cable.

"oh there's a storm in MONTANA!?!  I DON'T FREAKING LIVE anywhere near Montana!!"

Your gateway must be in Montana.  Weather at the gateway may affect connection.

Your speeds look pretty awful, and the first thing the company will want, no matter what approach you want to follow, is for you to conduct tests and diagnostics. They will conduct some of those from their side too, to see if there's a problem, such as dish alignment.   This is not something HN has invented -- Xfinity and Verizon, among others, follow the same protocols.

Yes, HN does have engineers.

71360kr, you can always pay the early termination fee and then go back to your DSL provider.