Is the problem you're having with all sites or specific ones, or is it even intermittent and not following any particular pattern?  The reason I ask is that some months back I was having a problem with Facebook, with any Facebook page often taking upwards of five or six minutes to finish loading.  The problem eventually solved itself, and I say "solved itself" only because one day I noticed that it was back to normal.  It still takes a little longer to load than many other pages due to all of the junk on it, but it's nothing like it had been.

So I get it the latency test doesn't square with things you all see and it doesn't seem to reflect my poor performance either.

Is there a test I can run from my end that you do trust? I hope it is something on my end so that it is fixable. Just let me know what to run, please.

Yeah, I could not see a way to distinguish 9am from 9pm, a light traffic time vs heavy traffic time, based on the results of the testmy latency test, so I think it might not be useful yet, or at least not useful with the defaults.

I had seen a suggestion once to vary the packet size of a ping trying 1500 or 2500 bytes, as the larger packets present more trouble going through and show issues a bit better -- I had run some things like that in the past to get a feel for how choppy things are, maybe that could show something?  Also, you mentioned the HughesNet site taking like 60 seconds to load?  I tried, and from the click on the link to the finishing of the big image it looked like I was seeing 15 seconds, but my link, time of access, and browser may be different.  Maybe some of the other folks care share what they see?

Maybe there are some other factors - the data saver seems to increase latency as well as decrease bandwidth to sites that deliver streaming video, maybe snooze that and see if a test comes out different?  Are you connected directly or using WiFi?  If there is some random interference, the WiFi may have to re-transmit a bunch of packets increasing latency (the data does not get billed twice over the satellite as the retransmit is just between your WiFi and computer -- you see see by comparing the WiFi log with the data usage)

I did compare the results of my latency on 12/19 this year with the same day in 2018. That is a test result done every few minutes over the course of 24 hours and the average is interesting in that it has dropped from an average over the 24 hours of 937ms to 668ms.  There was far more usage that day on 2018 for me then this year, so maybe the data saver had a bigger thumb on the scale then, but maybe my subjective sense that things feel faster now is related....

Perhaps just trying a simple test based on specific things you are seeing as slow and repeating at different times in the day in line with what GabeU suggests?

All those traceroutes look fairly normal for satellite and using TestMy is just confusing the issue.

I'm beginning to think the problem is part perception and just how web sites are constructed these days: There are literally hundreds of things (html, images, css, javascript, etc.) on a standard web site. That 1-second lag time applies to each one of those things, sometimes serially, because they all have to be downloaded separately.

If those things are on-site and/or cached by a content delivery network you might same some time resolving the host name, but you still have to transfer each one of those things, each requiring a different transfer connection.

Edit: For example, just this page (which is really, really lean, btw) has:
The main html

Should also add that those are the total external items. How those 19 seconds are actually distributed depends if they're loaded synchronously or asynchrounously, or if they're above or below the fold, as well as the size of each 'file' - all of which drives when the page actually starts to display.

Also thinking we shouldn't conflate this with the larger CenturyLink problem, which is gaps in the minutes, not seconds.

My speeds seem to be quite good but the latency is CRAZY bad.

I'm having the same problem you are. So let me tell you how it all shook out.

You're going to have a near impossible time getting HughesNet to admit there is a problem.  Talk to their first level tech support and they will follow the script and eventually turn you over to engineering.  That is, even if you can get past them.  Their first line of defense will be that the latency you are experiencing is normal. (Yes, they will really tell you that!)

Next is advanced support.  Some will try to help, but ultimately they will fall back on to that "everything is normal" line.  You're not going to get anywhere with them.

Laghingly, one mod on this forum even told me to go find another ISP if I didn't like it. (He was reported)

I had to climb very high up the ladder to get a real response.  But I did get a response.

They are starting (just starting, mind you!) to look into an issue of a data clog by the infamous CenturyLink.  Other than that, they can try realigning your dish or switching you to a different satellite.

Beyond that, you're kind of stuck.

That was my choice.  They sent a tech out to realign the dish.  (They are still working on that.  The tech brought the wrong equipment so he has to come back.)  Or they can switch me to a different, overloaded satellite.  So if the realignment doesn't work out, my choice is high latency or slow speeds.

Another possibility is bad gateway management or bad traffic shaping, but based on the data, it really looks like a data clog just outside the gateway.

As of this moment, HughesNet is not acknowledging that.  But I did get them to look at it.  At least, that was what the higher-up told me.  He seemed honest, so I will give him the benefit of the doubt.

Wish I had better news.  But there it is.

Laghingly, one mod on this forum even told me to go find another ISP if I didn't like it. (He was reported)

I follow the line of reasoning about the "apparent" slow speed but find it EXTREMELY disturbing. However it got me thinking it through a little differently. For the satelite to load a page in the  same total time as DSL, the satelite data rate speed must be fast enough to more than make up for the difference in the latency betweem the two (which is HUGE):

Total load time for a page is roughly

So i ran some numbers calculating where the page load time is the same for satelite and DSL given the specifid bandwidth and latency numbers shown. Basically, the satelite wins on pages that have few serial requests and large amounts of data.  DSL wins for pages with little data or lots of sequential requests - even really slow DSL. Here are the break even points for a few scenarios: 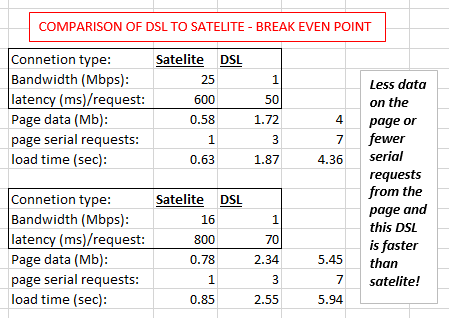 So physics is physics, you can't make the signals go faster than light. Satelite WILL have very high latency until they put them in lower orbits.  The latency delay is enough on normal days that it can result in web browsing being slower than even lousy DSL (that normally has much lower latency).

The latency will make gaming impossible (they inform you of this) and VPN connections probably are unusable thinking they lost connection due to the latency (but the sales people ask about that too).  They don't mention stutteringly delivered browsing and an often EFFECTIVE bandwidth that is much closer to low speed DSL. It isn't too bad for streaming videos as long as the app has significant buffering, but you may get a "lost internet connection" if you hit it just wrong. It is great for loading large files.

Once this all started to click I stumbled on the following article that I REALLY wish I'd have found a month ago before I had satelite service installed. https://www.howtogeek.com/138771/htg-explains-how-latency-can-make-even-fast-internet-connections-fe...

I believe there is a small window of time after service is installed in which you can cancel and NOT have to pay the $400 cancelation fee. Anybody know where that is stated? Is it 20 days or 30 days? I hope I'm not outside the narrow window.

I guess I should explain the grid of figures a bit.

-If you have a page that loads EVERYTHING with no more than three sequential requests and otherwise all requests are simultaneous, if the page requests a total of <1.72Mbits DSL will be faster than satelite. More data and satelite will load it faster than DSL. If the page is 1.72Mbits it will load by either method in 1.87 seconds.

-If you have a page that loads everything with no more than 7 sequential requests and otherwise all requests are simultaneous, if the page requests a total of <4Mbits DSL will be aster than satelite. More data and satelite will load faster than DSL. If the page is 4Mbits either method will load it in 4.36 seconds.

Same scenarios as earlier but DSL wins on pages with even higher amounts of data.

(Extrapolating: If satelite latency is 1200ms (most people calling that not bad during congestion), satellite wins only if data in the page is about double what is shown in th upper part.)  It is VERY easy for me to now see how this latency made it feel like I had worse bandwidth that the lousy 1Mbps that I left.

Does Hughesnet have plans for lower orbit satelites? Halving the latency would dramatically reduce how much stuttering would be perceived in delivery (due to sequential requests compounding the effect).

Lower part: Satelite with 16Mbps bandwidth and 800ms latency (near ideal conditions from what I hear)...

Oops, I meant "(more reasonable bandwith and latency though still great for high congestion times from what I hear)"