Starting my own post now after reading for days of others' simlar problems which to date appear mostly unresolved.

Gen5 installed Friday March 16, 2018, previously using Gen4 I believe it was, through DishNet.  Hands down the Gen4 a much faster, more reliable system and the ability to get help far surpassed that of Hughes directly. Hopefully these speed issues will all be corrected before my 30 days is up to cancel. Note, I am not comparing speeds or ping rates, etc to anything other than Hughes Gen4 which is what I had for a few years.

Using a brand new HP Windows 10 computer, set up the day after the Gen5 installation. 64bit, 8gb Ram, 1 TB hard drive. Have disabled all updates and only ones that can't be turned off are downloading during wee hours of the morning. As well have uninstalled all extra programs on the computer, installed Chrome and Firefox, but only using Firefox as the Chrome was even worse in performance. Have an adblocker on browser. Installed Glasswire to monito data usage as it appears data may be going far more quickly than with Gen4 but since Hughes is resetting each morning back to zero usage it's hard to tell yet. Computer is hardwired direct to HT2000W modem with a 4 or 5 ft ethernet cord with modem placed, of course, less than that from laptop. All wifi is disconnected on the modem (via the settings in Hughesnet account pages) and has been the entire time. Wifi light on front of modem stays on however, which maybe it's supposed to, but that doesn't make a lot of sense. It occasionally flashes, however. (?) I have no wireless devices that connect or try to connect to a wifi connection, and no close neighbors.

I ran a speed test on March 19 via testmy.net but wasn't logged in. Starting March 24 I logged in and started running tests using 25mb down and 4 mb up but don't do many upload tests as that's not my main concern although those speeds are less than half what they should be.

I'm posting a URL which I believe will take you to the test results, but in case it's not correct I am also posting a screenshot of the tests. Note the incredible variance in speeds, but in general, even at what the tests show might be passabile speeds, actual usage to watch a 2 min low quality video on youtube, (or anywhere else), is nearly impossible due to  buffering. Yes, video saver is on now but it makes no difference usually.  Also note that the "higher" speeds in the test were not totally, but mostly, late night. Still, these are generally nowhere near the advertised speeds, but close sometimes to 60%. 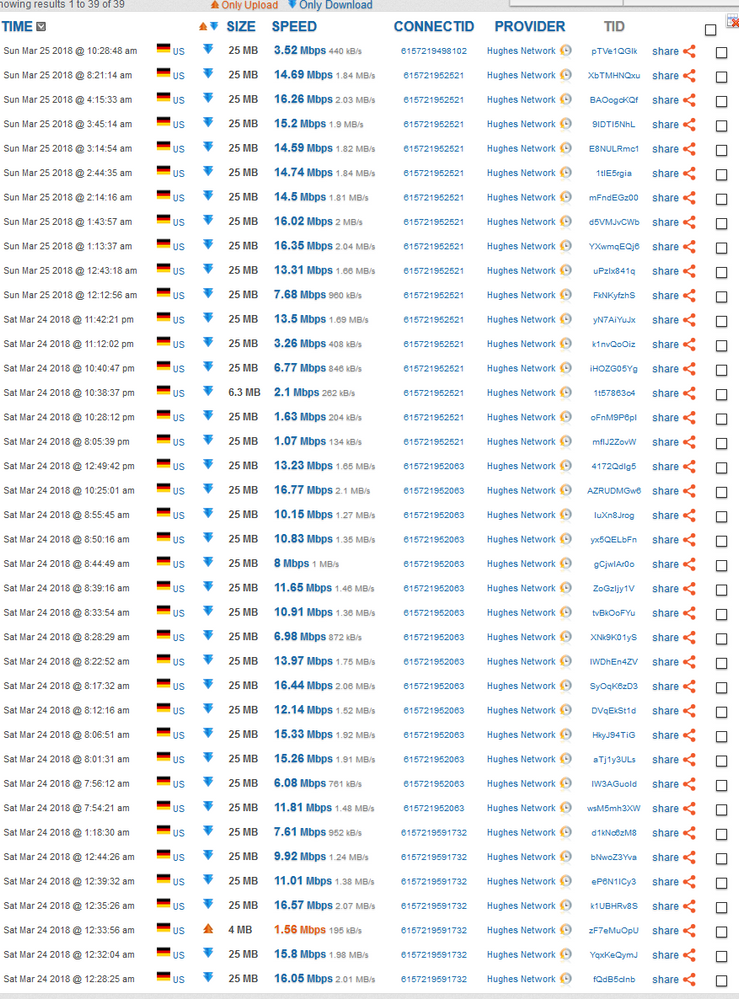 I also rebooted the modem this morning, just prior the the latest speed test noted above that tested 3.52Mbps download speed. I have, as well, had pretty much clear skies and good weather, no rain, for the entire 9 days that I have had this new system.

I understand that satellite signals are complex and at best not real consistent, yet the Gen5 system, thus far, has been far worse is really every respect than the previous Gen4. Add to this the fact that the Gen5 was promoted, at least to me, by several different people, (DishNet, three reps/techs connected to the installer I had), all promotional materials from all forms of media from HughesNet themselves, etc, as being much faster than Gen4, including the fact that the throttled over data limit speeds would still be 2 to 3 times as fast as the usual non-throttled speeds of Gen4, the fact that it has streaming capabilities, and the fact that you could actually use a phone with the system (thank goodness I didn't go ahead and get that). None of these are true. And by judging from just the complaints I see on here and as well other review sites this is very common and to date pretty much unresolved.

I appreciate that there are people on this community trying to help, I sincerely do. It appears that, for whatever reason(s), this Gen5 system is either not capable of what was promised, been over subscribed to the point of not being viable, launched prematurely, or has serious issues that are either being not recognized, not admitted to, or simply not able to be corrected.

If someone here can "fix" these issues, in a reliable, long standing way, then all is well and good. It appears that may not be possible. At any rate, if I cannot get this system to perform at least on par with the older system before my 30 days is up, I will have to cancel and look elsewhere or see if it's possible to go back to Gen4.

If I have overlooked any test needed or other info, please alert me and I will oblige to the best of my ability.

Thanks anyone and everyone that can help or responds.

Liz
Moderator
In response to deserthaven

Thank you for your patience and cooperation. I ran diagnostics on your site and nothing out of the ordinary is showing up. Your download speed right now from your modem to the gateway is 20904.626 kb/sec. How are you finding your internet experience lately? Is there something in particular you're trying to do online that's proving difficult?