After a conversation with a level 4 tech performance was borderline for 4 days and then worse than before as the download speed was reduced.

The level 4 tech had me bypass my router, unplug the modem, and then run a speed test which came back as borderline. Download=1.2Mbps Upload=1.1Mbps. Within 4 days service was slow to start loading and once loaded would buffer every 10 to 15 seconds. Within 48 hours it was back to .07Mbps to 3.65Mbps (mostly below 1Mbps) upload and .58Mbps to 187.76Mbps (a fluke?)

The speed tests I ran on Testmy.net were run at 6 megs up and 12 megs down. I didn't see any reason to run the tests any higher than the conditions Youtube was running under. I was watching 4 minute videos at the max resolution of 360p which used less than 11 megs. I couldn't run the resolution any higher and even at 360p resolution would drop to 240p and even 144p. Either way it was more than irritating and virtually unwatchable.

Three technicians have been here twice last summer to tell me F connectors were corroded and the dish needed re-aimed with a minimal improvement in service that eventually degraded once again. In every call to technical support I get a pitch to move from Ultra 4 to 5. I already have a commitment that download speeds will be max 20Mbps and upload of 1.2Mbps plus I get a builtin router and it will only cost me an additional $40 or so per month. I have a router and I don't believe I should have to pay additional money for a service that operates as advertised.

I'm at a loss. Hughes is a dependable with very few outages. I've had the service for longer than I can remember, at least 10 years or more. Up and down speeds became a problem as bandwidth was over extended until EchoStar XIX was put online at which time I assumed the overload of Gen 4 bandwidth would ease which it appeared to do for a short time. Now service has reverted back to constant buffering. My neighbors just had Windstream installed and tho they are not my favorite people I will ask them what they think of the service. They offer 75Mbps for $20 less than I'm paying Hughes.

As I said, I like Hughes for it's reliability as far as rare complete outages but as it becomes less and less usable when it's on the lack of complete outages just isn't a worthy trade off.

Your upload speed still looks alright, but your download speed has definitely gone way down.

Are you sure you didn't run out of data sometime between the afternoon of the 11th and noon of the 12th?

I don't know if I'm repeating a post I was going to send since this logged me off and I don't see my message posted so.......

One of the reasons I have so much data then and again at the end of the month is that it's so slow there is no way I can get it used. I can't view a video above 360p. Setting it any higher and I watch it buffer constantly. You need to look at the Testmy.net test I ran today 1/24/19 Both upload and download drop into the kilobyte range on a regular basis. I'm going to call in once more, for what it's worth, but I think that unplugging and plugging in the modem is a fix I can try on my own and I honestly see no point in rebooting my computer. I empty cookies and cache on a regular basis so I know that's not a problem. I'm pretty much fed up with this service. And I don't remember what else I wrote other than I appreciate you  responding as no one who works for Hughes pays any attention. 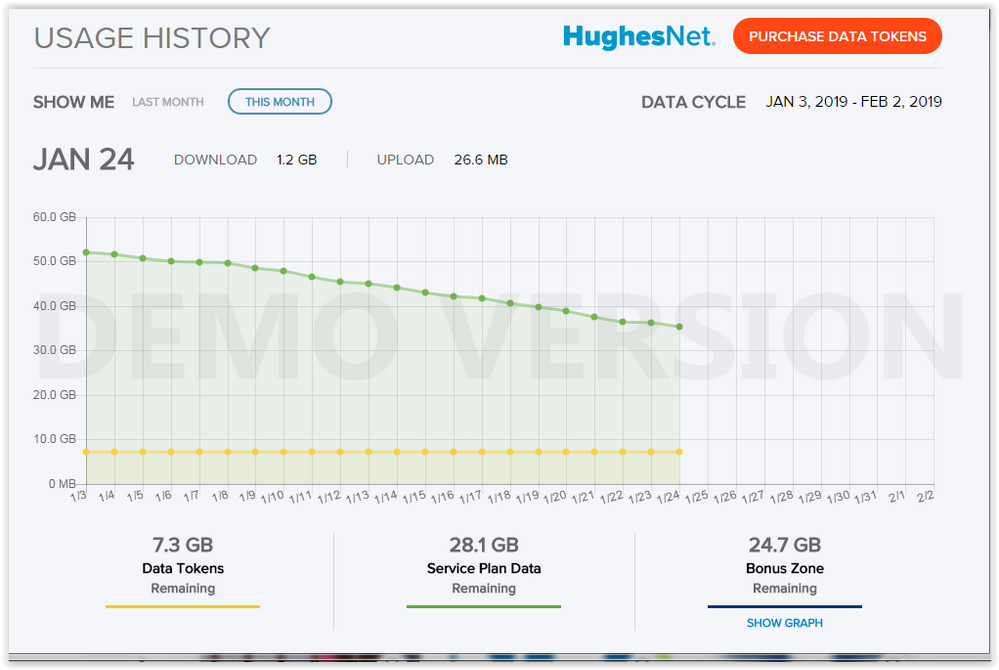 Lots of data left. Even more this month

Just wanted to show that data availibility wasn't the problem. I wish it was.

I received an authentication error. It happens about the same time my Glasswire sends me a message that there has been a change in the Internet service, "Internet is down" It does that when downloads drop below the .04Mbps. I've got to quit on this before it boots me again. Thanks GabeU.

Are you sure you ran the tests at testmy while you were signed in today?  The only two I see from today are these, which look okay, though the download test size was HUGE (200MB).

If power cycling your modem helps, but all means, feel free do to so, though you shouldn't have to it.  Just make sure you don't do it more than a couple of times within a few hour period as it can cause the system to think there's some type of technical issue, causing your service to be put onto a backup channel within your beam, which can be slower than normal, for a day or two.  Then again, you're already having speed issues, anyway, so it might not even be noticeable.

And with having plenty of data there is no way your download speed should have been so low (12th - 19th), especially at those times of the day.

I'm hoping that a rep will answer soon with some possible suggestions, or to look at what the level 4 tech(s) did.

Thank you for posting. I am sorry you are experiencing this. After reviewing your account I see the technicians made a few adjustments on the modem and notated that things were working better. When I ran a speed test, the figures I was getting back from the modem were a lot faster than the speeds you posted. Since you have an external router, I cannot see the signal quality of these devices to confirm whether or not they are within an acceptable range. This could cause your speeds to be a lot lower from the device you are running them on. In addition to power cycling the modem, please connect directly to the HughesNet modem while streaming and see if you notice a difference in buffering. Also if you need additional assistance with running your speed test on testmy.net, here is a helpful link hninfo.us/speedtest.

Thank you for replying Damian. As soon as I get a chance I'll bypass the router and run Testmy.net again and let you know what I get.

P.S. I may be wrong but this useage meter looks a little screwed up. It's from 1/25/19 AM.  And yes, I've rebooted the modem. I actually have more data than this. 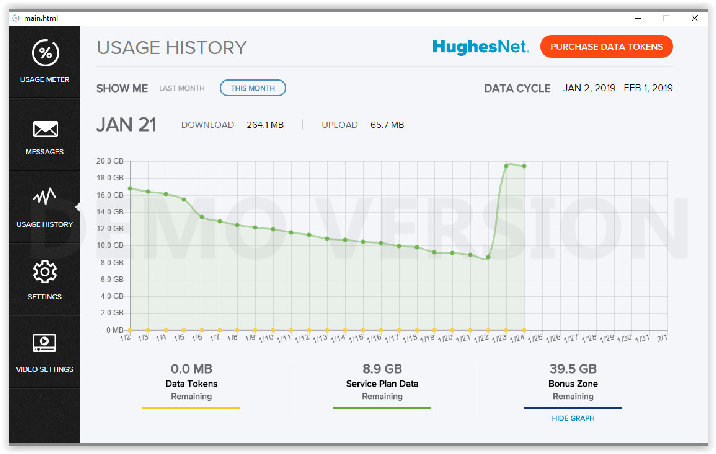 Take a look at the date shown.  The 8.9GB of Service Plan data being shown is from Jan 12st, not today.

But, something is defiitely not right with that graph pic.  The data cycle dates have changed, as have total possible data amounts.  From 1/3 - 2/2 in your first pic to 1/2 - 2/1 in your second.  The token data has also completely disappeared.  It's as if the two data graphs are from two different customers.

@Damian  Any idea what might be going on here?  The two graphs look like they're from two different accounts, unless there was a service plan downgrade, the data logs reset, and the dates changed.

I am happy to help. The usage meter does appear to be very different from your actual current usage, and you do indeed have more data than what is shown in the picture. This is a very rare occurrence and I have not seen it do this before. I recommend uninstalling and re-installing the app. For a more accurate look at your usage in the meantime, you can go to the systemcontrolcenter.com while connected to the network, or you can log in to your support center, go to My Account> click on usage> then view history.

Hi Damian, I've bypassed my router and run Testmy.net several times with close to the same result each time. I am assuming that of the two graphs presented for each test, up and down, the lower of the two graphs is the one I should be looking at. I read all through Testmy for information but either I missed it or it wasn't there. I tried to log on to hninfor.us/speedtest and received the message "The link you clicked has been deleted or suspended." I guessed at all kinds of reasons but none seemed like a sight you'd send a subscriber to so I gave up.

Anyway I ran the up and down tests independently so I had some control over the data used. I had been told to use 6Mbps up and 20 something down but realistically I with resolution capped at 360p I was not going to surpass 12Mbps without a great deal more patients. Hopefully you can see the lower graph as it dims when not highlighted. Testmy says that they present results in bits and bytes on their scales (meaning graphs?) but both are labeled Mbps though one tops out at 200 while the other tops at 75. At any rate, the chart below the bottom graph appears to pick random times to record so it doesn't appear to catch the lowest or the highest as they appear on the graphs and this is what they look like. 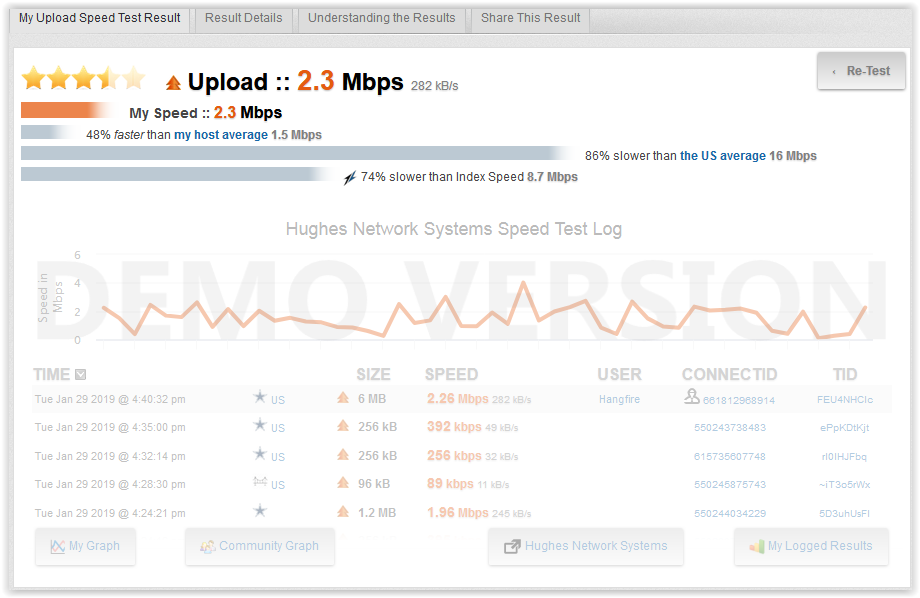 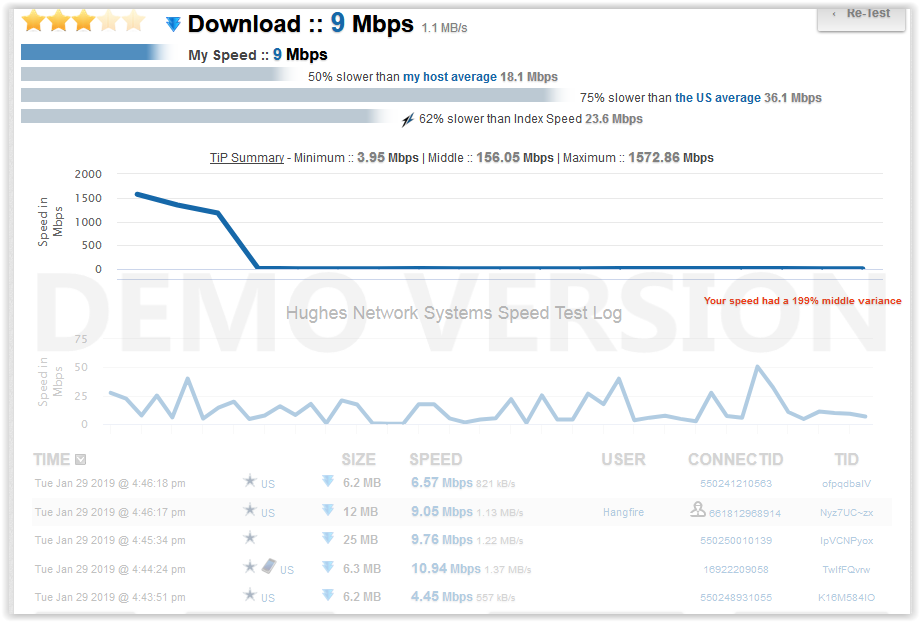 I'm leaving my router disconnected for a couple of days from now so if you discover anything please let me know so I can reconnect my phones and computers. And let me know if I'm reading the graphs incorrectly though from the evidence of the resolution switching back and forth from 360p to 144p and the occasional surprise of 480p I'd say the lower graph is accurate. Thanks Dave

HughesNet's own test is buggy, and it seems that it's getting buggier and buggier as time goes on.  I don't even bother with it anymore, and I haven't for official testing purposes for a couple of years now.