Actually I just posted that usage graph because I thought it was interesting. I'm not really that concerned about the usage since I've only run into a warning twice in 10 or so years. It corrects for a while after I reinstall it but it wigs out again after a while.

GabeU, is that the graph I should be looking at? And when you say Hughesnet's test is getting buggy do you mean Testmy.net? I thought that was an independent.

As far as that graph and it's corresponding chart go, I'd be happy if uploads stayed above 1.5Mbps since that's what a data pig like Netflix requires. I'd like to see dl numbers around 15 to 18Mbps. Supposedly, according to the information about Testmy they are providing two different charts, one bits one bytes but they don't say what a chart is and both graphs are labeled Mbps but I repeat. So if I'm really receiving those numbers what's up with the slow starts, varying resolution, and buffering? And I pinged Houston in four hops it came back as 1580 something pretty consistantly but the average of all the pings was around 625 which is as good as satellite is going to get. Pages take a long time to appear but when they do they fill in a flash which I understand is the symptom of excessive response time.

So what's the next move? Get back to me on the graph thing. I want to know what I'm looking at.

And I did know what the test size was suppose to be but strange thing is the upload test won't exceed the number you input while the download will increase up to 200Mbps regardless of the max number you think is locked in on the dl only test. It increases until it hits a 7 second dl and truly was starting to eat up data but I'll use those numbers next time. Thanks

The HughesNet test I'm referring to is their own speed test.  That's what I thought you were referring to with that URL you posted (hninfor.us/speedtest).  I see now what you were referring to, as in the address Damian posted. It's instructions for testing at testmy.net, though the test size given is for Gen4, not Gen 5.  If you entered the address as you posted it in your reply, you added an r after info, which shouldn't be there.  If you copied and pasted it, it's possible that you copied the period.   I just copied and pasted the address he posed and it worked fine.  But, with that said, you can get to that page here, as this is what the URL Damian posted resovles to...  http://customer.kb.hughesnet.com/Pages/7001.aspx

Regarding Netflix, the 1.5Mbps it needs is download speed, not upload speed.  Netflix doesn't require much upload speed, as you're streaming from them, not the other way around.  You're downloading info, so it's the download speed that's important.  But, congestion, in combination with the latency, can cause problems with Netflix, even if your overall speed is adequate.  The latency is what it is and you can't really do anything about it.  Congestion can be high due to a high number of people being online, and there's really not anything you can do about that, either, though congestion should really only be a problem in the evening hours.  Then again, that's when everyone is trying to stream, of course.

Again, though, your upload speed is plenty, and it's not the problem.

Lastly, if your web pages are taking more than five or six seconds to start opening, that could indicate a different problem, though I don't know what it is.  Some web pages, however, take a long time, regardless.  Normally web pages start to open within three or four seconds for me, but once in a while I'll find one that takes fifteen or twenty seconds to open, though I don't know why.  Just slow servers on their end, I guess.

Regarding the pictures you posted, the only important info is the test result at the top of the page (2.3Mbps and 9Mbps).  But, when you've run new speed tests and you want a them to be looked at, you really only need to say so, as your Results page URL has already been posted, though you can post it again if you want.  I posted it in my previous reply. 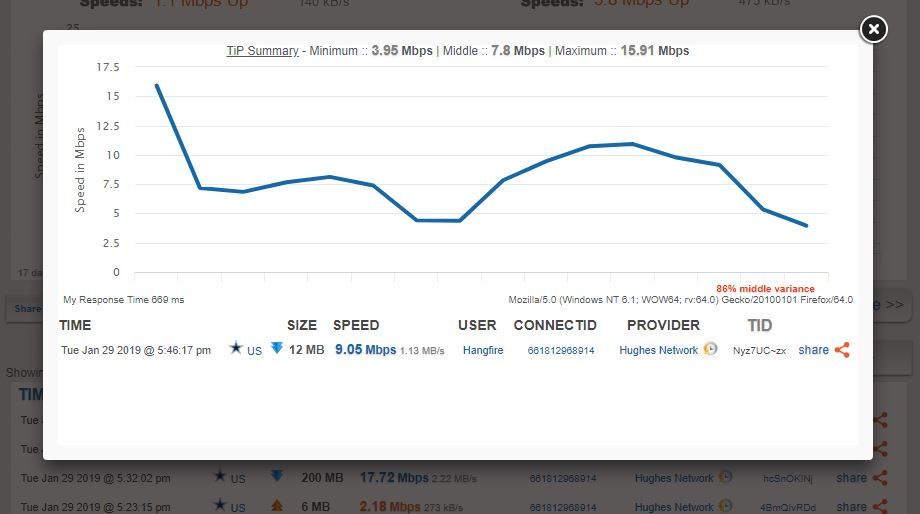 If I remember correctly you have Gen4.  If this is correct, make sure to use the 12MB for download tests and 3MB for upload tests.  However, as I said on your other thread, if you run into an issue where your download tests end up re-sizing to something larger, go ahead and use the 15MB test size for the download tests.  It's a little larger, but more importantly, the 15MB test does NOT re-size to something larger, even if the test doesn't take at least seven seconds to finish.  The reps will be okay with you using the 15MB test size if you need to, and they also recommend it to help save data if the re-sizing often happens when using the 12MB test size.

I'm debating on starting a new thread since I've allowed so much time to pass while testing but I hate to have to go look for questions already answered so I'll just see what happens. I'm pretty sure I've lost Damian somewhere along the way.

I've been testing off and on especially when this  either buffers repeatedly or I can watch the resolution drop but I'm still not sure what I'm looking at regarding the Testmy.net charts and graphs. I do know that I shouldn't have to reset the resolution from 144p to 360p, the max a video will start at and has a chance of staying at but only infrequently. I'm still not clear on the two graphs presented by Testmy.net as it appears that they say they present one in bits and the other in bytes though they are both labeled the same, 'Speed in Mbps.'

I also looked at the TID but don't really see where that is telling me I have an issue with congestion.

An analogy to response time, ping rate, was presented as a moving van loaded with all the furniture of a house that leaves that residence heading for the new home but only travels at a couple miles per hour. All the other moving vans are traveling at the speed limit. Your van, the slow one, finally arrives at the new house and as soon as it's stopped a whole gang of movers rush to take everything from the van placing it all properly in the house in just a matter of seconds. The delay was the slow speed of the package traversing the distance between the two houses which is exactly what I'm seeing, long delay in finally connecting but when it does the page appears completely.

Still at a loss.

Regarding the TID for each test....

...indicates more congestion than this...

See the difference?  One is showing evidence of congestion, while the other isn't.  It's not a perfect way to see congestion, as you can still have congestion affecting your speed considerably with the TID still looking like the latter, but it's often a decent indication of such.  Basically, the smoother the line, the less congestion being experienced.  The majority of your speed tests look like the first picture, which would most likely indicate that congestion, which can most definitely affect your streaming.

With this said, your overall speed over the last couple of weeks looks like it has improved.

I've been hoping that a rep will chime in with some ideas.

Your post was 2 weeks ago now, and I am replying in reference to your screenshot of the Usage Meter graph.

Did you get it squared away yet?

There is another post that discusses other users with wacky Graphs.

There we found a fix, but not the reason it happens.

After running further diagnostics on the account, everything has come back as fully operational. The speeds you are getting are up to par with what you should be getting on your Gen 4 plan. I have not gotten an update on the strange usage graph as of yet, however, the link to the post referenced by @kitnbob does seem to correct the issue. Corruption in local cache files can cause inaccurate readings. Instructions to delete this file were posted there. Regarding the buffering during your streaming, you are using your own router and therefore I cannot see your devices signal quality, or ensure the router is performing properly as well. I know you have run speed tests while directly connected to the modem,  but are you also directly connected while streaming?

We're closing this thread since we never got a reply from you. If you still have concerns, please start a new thread and include a detailed explanation so we can more effectively help you. I hope the suggestions posted here were helpful.