Promotion has expired; now being throttled?

Anyway, good thing I posted this as somebody at Hnet must have read it and created a troubleticket and resolved the issue; would have been nice for them to send me the ticket number so when this happens again, I can get it resolved easier

.  Somebody must have jiggled a cable or reset a switch or something.

It's highly unlikely that anyone did anything to resolve your issue because the pictures you're posting don't show that one existed.  There is no context to them.  All they show is that that particular amount of data was downloaded/uploaded during that time, but again, there's no context to them.  This is also another reason why I don't believe that there was any intervention.  Any attempt to help would have been preceded by a number of questions/requests to establish that there was a problem, with the likely first request being speed test results, followed by what it is that you were trying to download, and from where.

If we're to look at the pictures and deduce what I think you're trying to show it only shows that, if you were trying to download a single file during the entire time, your speed went from approximately 1.7Mbps to 2.5Mbps, but again, because there's no context, even that can't be deduced.

Please understand, I'm not trying to sound like a jerk or condescending or anything of the sort.  I'm just trying to understand what it is you believe the pictures show.   Are you starting to download a large, multigig file, then allowing it to continue downloading for an hour to see how much was downloaded in that hour?  If so, what is the file (from what site)?   Or, are you choosing a 1GB file from somewhere and seeing how long it takes to download the full 1GB?  If so, again, what is the file (from what site)?  I ask because I would like to try the same to see what happens for me.

Ooops - spoke to soon.  As you can see from the image below I've been online for 45 - 50 minutes and only 145 MB of data has downloaded - when system is working properly this will read around 750MB +.  Hughes net is now prompting me to mark one of the previous answers as a solution.  None have provided a solution so I'm not marking any as a solution.  I guess I'm just going to have to live with this for $80+ a month..... 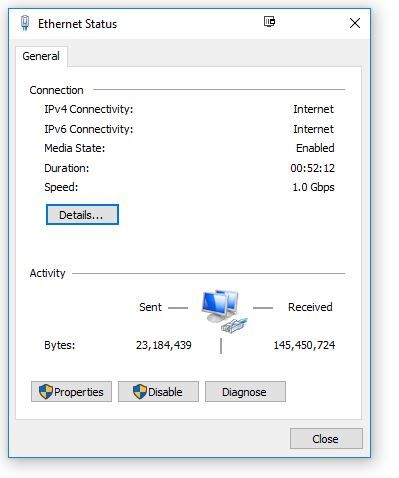 Loveoldtrux, you may want to read what @GabeU wrote to you and provide some context for what you think are issues.  You are wasting your time when you continue to ignore people who are trying to help you, and you are wasting theirs.

Edit: I am not a Hughesnet employee or representative.

Again, there's no context to those pictures.  They aren't helpful in any way.  All this latest pic shows is that in 52:12 a total of 145MB was downloaded and 23MB was uploaded, nothing more.  Not when, what, how, size(s), duration, etc.  There is absolutely no context.

The pics you're posting don't show what you think they show.

You're a real piece of work, aint'cha maratsade?  "wasting their time and mne".  Right.  You are typical for "tech support" - make the customer feel like an a _ _ so they will discontinue contacting you and YOU end up with goof looking stats, giving you time to sit on YOUR duff to browse the web.  Right - real good.

For  your information I DID look at GabeU's replies - it's quite obvious he doesn't know what I'm talking about when the information is right in front of his eyes.