I am  going down for the count with cancer and no longer have the strength to work the hard cases.

Your not givend appears to be closed but data can be used, connections  can be made in the strangest ways.

I have given my password to my daughter but for two days running  she was able to connect . ....... through  my printer.

Keep an open mind, rule  nothing  out, everything  is suspect until proven not guilty..

I don't have a closed mind, just have already done all of the normal checks and the "coincidence" can't be just that. That's my point. The data usage started immediately upon the switch to Gen5 and is massively larger than ever before. That's not coincidence and it's not a closed mind. All of the wifi connections on the modem/router have been turned off. The "connections" would have to be directly to my computer and absolutely nothing is different from the morning that my other service was disconnected and the hour the new Gen5 was connected. This is my point. All of these suggestions from people, including moderators, are just bypassing the problem and wasting time and space. We are not all ignorant of how to use the basic internet connections, computers and browsers. Something is different, clearly, and it's not acceptable. I am truly very sympathetic to your health issues and you do not need to respond. I am looking for someone, anyone, to have a real answer as to why this is happening to NUMEROUS customers of Hughenet and to have a solution. This is certainly not good business.

That's really not an accurate comment. You see, just the fact that someone is expected to believe that somehow, magically, something on the customers end changed literally from one minute to the next and is continuing to drain data is just irresponsible and pathetic. None of the replies I've seen from posters with this issue are really being taken seriously as the same steps are being repeated over and over and over even after the op has stated those things have been done, repeatedly. If it was the lack of adequate compression of the Gen5 compared to data compression of the Gen4, that would explain my issue, maybe, at least to a degree, but that wouldn't explain the poster that's been asking about this for now over 4 months and is on the Gen4. When all wifi is off, nothing but one computer, the same one, with the same programs, the same settings, etc., being used exactly the same and even less at times, is purportedly using over 3 times the data as the hour before when on another system, is just absurd and uncalled for.

@Gwalk900  I am so sorry to hear about your illness, and the progression it has taken.  :-(  I will be praying for you, friend.

@deserthaven really does have a point guys.  This issue started for me about a year ago with that whole stupid April the Giraffe thing.  Because I noticed I could watch youtube for a considerable length of time during the beginning of the month and then towards the middle and end, even just a minute of youtube would drain data in a ridiculous way.

But at first, I thought it was a fluke...so I watched, and watched.  I noticed that my science lessons (which I cast from the laptop to the TV) would be fine at the beginning of the month, but towards the middle/end, the data would just drain so much faster.

I have done my legwork.  I should not have to pay more money to purchase a router that can monitor every single byte when I can plainly see (as can anybody who's been following this drama for the past four months) through anecdotal evidence that the data tanks around the middle to end of the month, every single month.  I know how much usage works.  I know what my kids are doing online (practically nothing, except for that math game I occasionally allow them to play).  This is pretty clearly a HN issue and as such, HN should be the one doing the research.  Not the consumer.

That said, I understand the need for "proof".  I understand that my case could well be perceived as a BS case where I am doing something on my end and not showing it.  WHY would I waste so much time here doing that, though...seriously...I am a homeschooling mom of four, running around to a billion different kid activities...like I have time play these games.  But, I'm willing to play along and do what needs to be done.

Hopefully tonight, overnight, I can gather up all of our devices and see if I can establish a data usage rate.  I plan on using each device for 30 minutes streaming music from klove.com.  The data used for each device should be approximately the same.  Next month, at the beginning of the cycle, I will run the same test and we can compare.  The reason I'm going to do this overnight is so I do not drain the anytime data that is desperately needed.

Here's the thing.   As a consumer, this is incredibly frustrating.  I have extremely limited options for internet where I live.  I've done the Verizon MiFi (back in 2011, when we first moved here), and it was miserable.  Constantly dropped signal, very low data allowance (much lower than HN, but interestingly, running out of data wasn't as big of an issue).  We have our cell phones but the mobile data is often difficult to work with and pages do not work as they necessarily should.

Because of where we live, hard-wired internet is not an option, and it's not likely ever going to be ( @GabeU, check your PM for an update on that, btw).  HN more or less has us by the cahoonas.  If I want internet, without having to run down into our village to use the library, HN is it.  Mark my words though...if something else comes along...ANYTHING else....I'm out of here.  HN doesn't give me much reason  to stay.

Your issue is different than the OP's.  If you'd like help in figuring out what's using your data, and how to slow it down or stop it, please start a new topic in tech support.  Please don't hijack this thread with complaints that are unrelated to the OP's issue.

On a further side note, when addressing specific posts on a long thread like this, please either quote the post or at least the person you are replying to.  Not doing so can make it difficult to figure out just who your'e replying to or what post you're referring to.

Good evening, morning, WHATEVS everyone!  I'm going to begin my data test with our devices, etc., now that it is past 2AM.  I'm going to stream 30 minutes through an online music site, klove.com.  (I love me some Christian music...here's hoping I can keep the singing down...don't want to wake the fam).

For each device, I'm going to note the data start, data end.  I'm going to show screen cap pics from GW, and from HN to document how much data is being used.  As I listed before, we have four Kindle Fires, two Galaxy Tabs, the laptop, my cell phone and I have one additional Kindle Fire which will not be part of the test (my dinosaur Fire).  None of these devices are capable of updating apps, as they all are pretty "full".  The kids' Kindles have little in the way of apps anyways...mostly just books.  I will monitor to make sure there aren't any backup things going on, such as automatic uploading of pics to the "cloud".

In order to maintain integrity of the test, I'm going to disconnect the WiFi to my laptop when it is not the device being tested.  That said, I'm going to start with the laptop.

I'm going to have a separate post for each device, with it's own pics.  I'll see if I can compile all of it into one later.  Hopefully I can finish all of the devices before my husband gets up for work (though looking at the time, I don't think that's going to happen).  If not, I'll finish once he leaves and/or tomorrow night.  I am hoping to get some kids on Prodigy so we can compare the data usage from earlier this month.

Please note, we are watching the Bonus Zone, as it is past 2AM 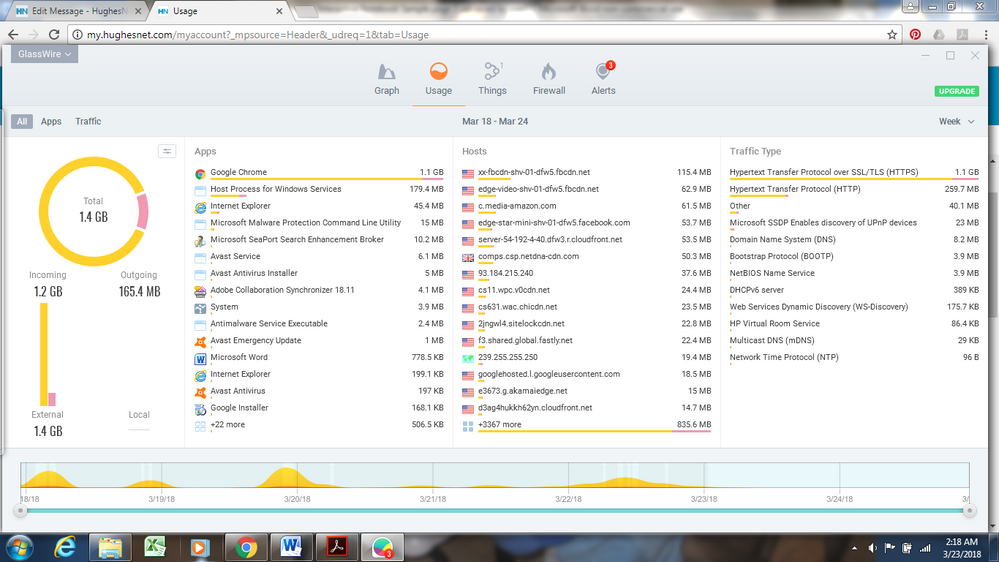 GW this past week. No other devices were on all week. 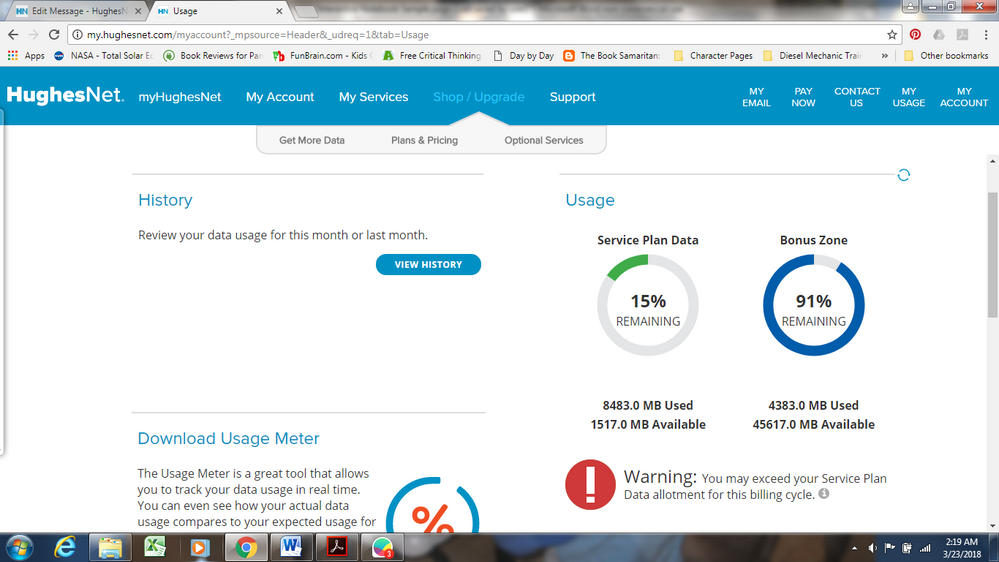 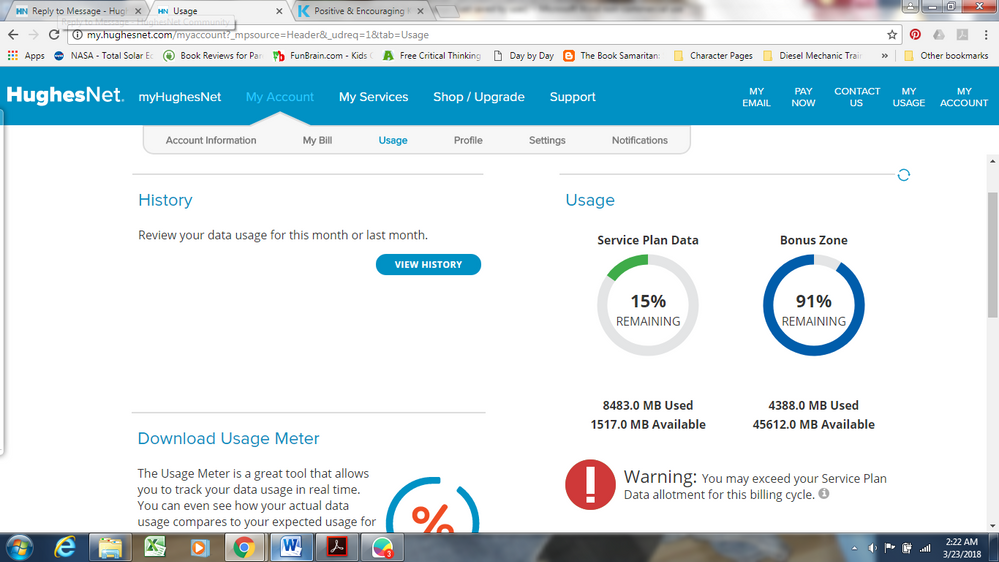 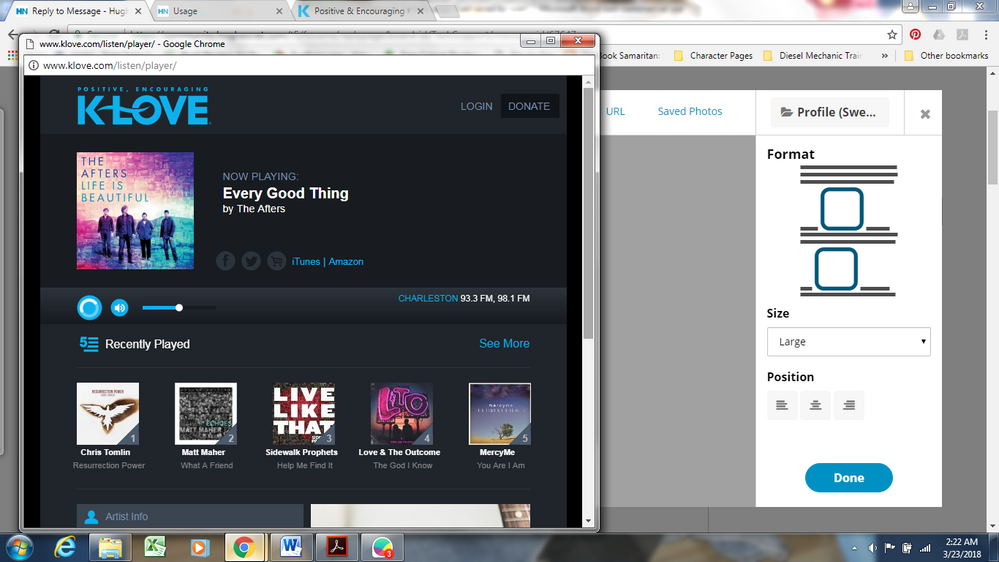 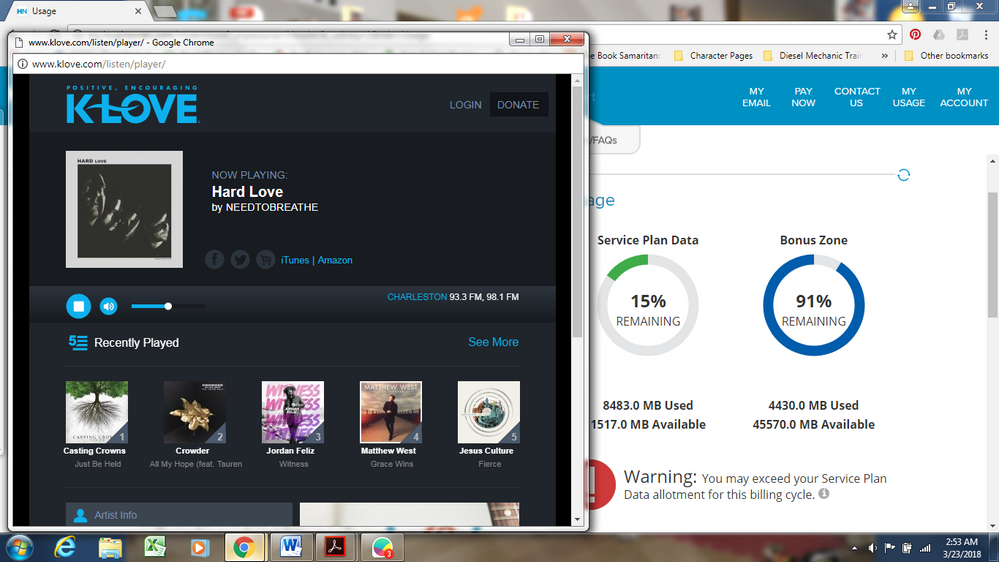 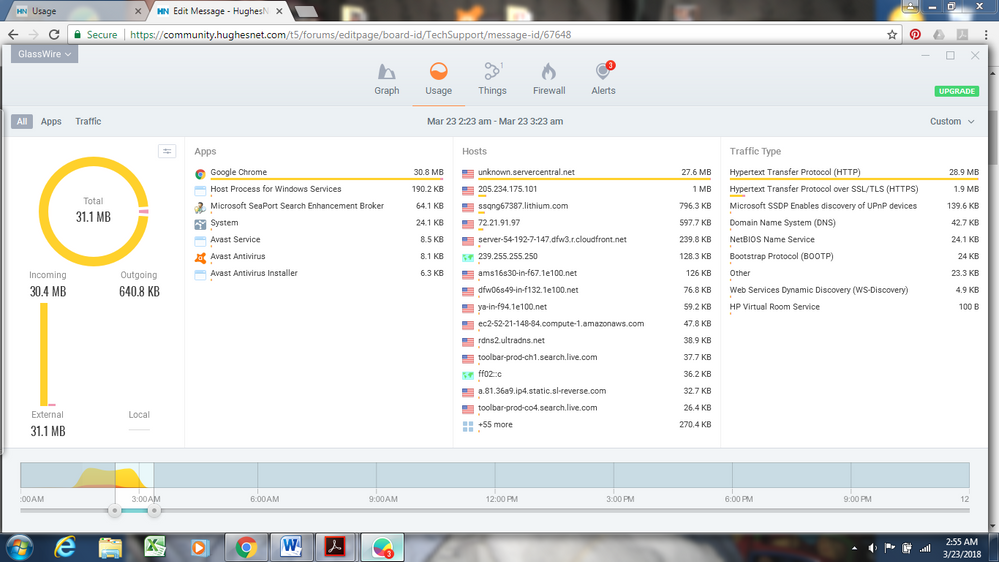 I may have to bust out in song. This is one of my favs (awww, bummer...I can't post a pic from my cell phone).

Anyways, it's Fierce, by Jesus Culture. Awesome song. Very 90s. I'm going to have to mute this if I intend on getting anything done, lol.
0 Kudos

Turning off Wifi for the laptop. 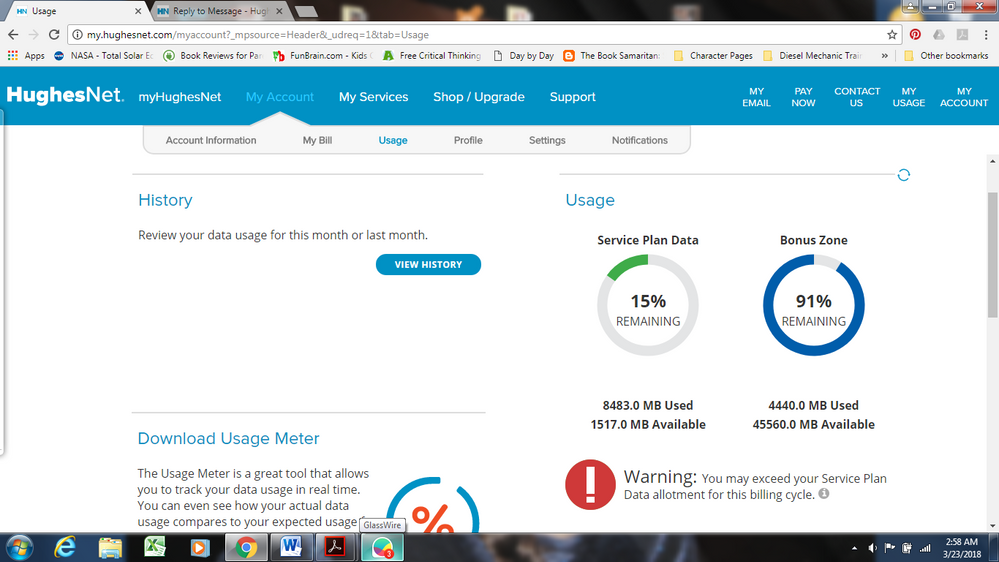 Data end: 4725MB for a total use of 281MB during that half hour (considerably higher than the laptop, which is odd).

GW shows 519KB used by the laptop during that time, a small amount, and it was actually less, but I forgot to screen cap GW just before turning on the Wifi for the laptop, lol. 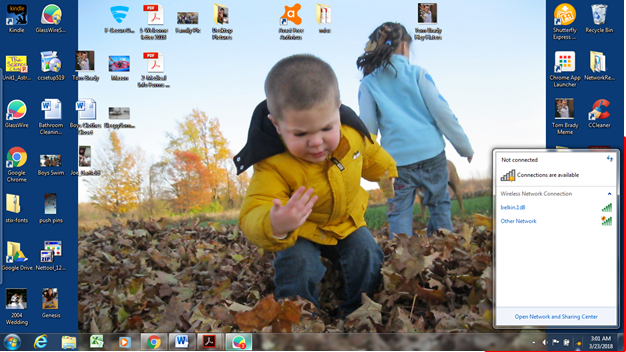 Laptop Wifi is off. 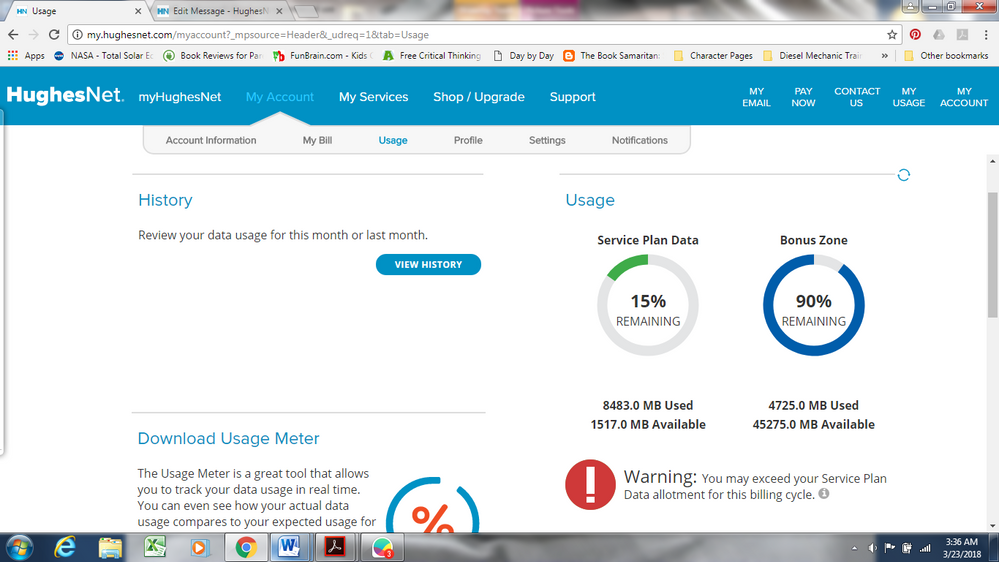