The laptop is only connected to the internet through Hughesnet.  I don't know how to tether my cell phone...and last time I went looking, I think my particular model phone was not set up to allow tethering.

Ah, okay.  Then using your WiFi isn't going to skew anything.  The fact that your computer's data tally is higher than HughesNet's for the same time period is really good.  Though we can't really dive into the issue of the higher data usage during the second half of the month until later, what's showing so far is really good, data wise.  It's showing that your Gen5 service's compression is working really well.  I wish mine worked that well.  LOL.

Basically, it shows that you're getting more for your buck, firguratively speaking, and somewhat literally, too.  Since January 1st you've used at least 1.1GB of data with your computer, but HughesNet has only "charged" you for 646MB.  That's really good, and it shows that the data compression with Gen5 is working very well for you.

And, BTW, the fact that your data cycle starts on the 1st of each month makes things a lot easier when comparing.

Ah, no, my mistake.  I just assumed you had Gen5 (I do that too often).  If you got service in 2013 and haven't upgraded since then you have Gen4, and that would explain the great data compression.  When I had Gen4 it was like that for me, too, but Gen5 doesn't seem to compress data very well, if at all.

With Gen5 you definitely could get more data, as I see you presently have 10/15.  You must have been/must be in one of the areas that's either full on your corresponding ES17 beam, or you couldn't connect to the ES17 and are on the Spaceway 3 satellite.  I'm not very familiar with the plans like yours and why they are the way they are, data amount wise.  However, with that said, I don't know that I'd want to upgrade to Gen5 right now with all of the speed issues going on, especially if you live in Northern CA, where the Gen5 speeds are absolutely deplorable.  Just plain awful.  It might be a good idea to wait to see what's going to happen with the speed.  That's just my advice, but you can always do as you like, of course.  All Gen5 plans have 50GB of Bonus Data and the plans available (Anytime Data) are 10GB, 20GB, 30GB and 50GB.  And, of course, depending on the speed you presently get you may not feel that the Gen5 speeds at present are that bad.  I can tell you that my speeds vary from 20Mbps to 30Mbps, on average, during off peak usage hours, and anywhere from 500Kbps to 10Mbps during peak usage hours.  Those poor souls in northern CA are seeing speeds barely reaching 1Mbps in off peak, and they're lucky if they hit 400Kbps in peak times.  macsociety is dealing with speeds in the 200Kbps range, and he/she isn't alone.  It's truly awful.  I've NEVER seen speeds that low, and I started with a legacy plan in Dec 2004.

Gen 5 just came out in 2017 so unless you paid to upgrade (new modem being sent to you and installer adjusting your dish), then no, it would not be Gen 5.  Maybe 4?

If you click on "My Services" at the top of the page it will show what plan you have.

Can you show @Sweetpea3829 how to switch to the "Apps" button and to use the "sliders" to define a time period?

If you want to look at what program or app is using data on your computer during a specific time period, select a date to view on the top/middle, then click on Apps on the upper left of the header.  Then move the left and right sliders on the bottom to specific times.

On the following pic, you'll see that it's showing data being used from 12:00PM to 6:01PM on Jan 8th.  It's a little hard sometimes to narrow it to the exact hour or exact time you want to, like me trying to get it to 6:00PM, but 6:01 is close enough.  And on the left you can see all of the apps that used the data and how much each one used.  If you click on each individual app, it will show you every host that app used during the time period you're viewing, whether it be a few hours, a day, a few days or an entire month.  I didn't click an individual app on the left, so the picture below is showing the hosts and data usage for all apps used during that time period.  BTW, the date and time I picked was arbitrary and only to demonstrate how to do it.

I chose the date (8th) while using the "Custom" setting on the upper right, and you can do the same, or a span of dates (click on the first date, then the second, and it will include everything in between), or you can choose Day, Week and Month settings, and when you choose them you can still alter the actual days if you click on the date(s) in the upper/middle, or even use the two sliders on the bottom. 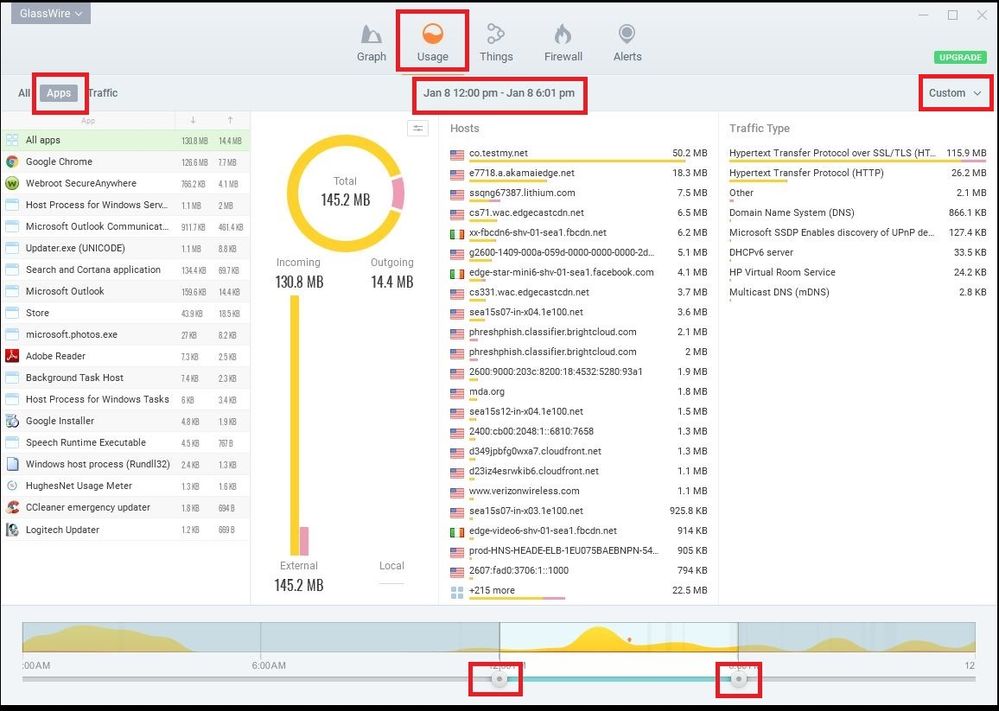 Gwalk, I am SO sorry to hear of your cancer.  :-(  Prayers for healing.

Ok, I confirmed that I have Gen4 Power, and my bill (after taxes, fees, etc.) is $71/month.  That's for 10GB of Anytime data, and 15 GB of Bonus Data.  I don't know what my speeds are but...they seem relatively fine. So I pulled up this page, with the available plans and, I think I'm an idiot for not looking into this more often, lol.  I check with DirecTV all of the time, to make sure I'm getting a good plan.  I've never really checked with Hughes.

What do I need to know about these plans?  Will I lose anything if I change to...say, Prime Plus?  Prime Plus has the same amount of Anytime data, but way more Bonus Data.  Changing my data plan wouldn't impact my Gen4, right? 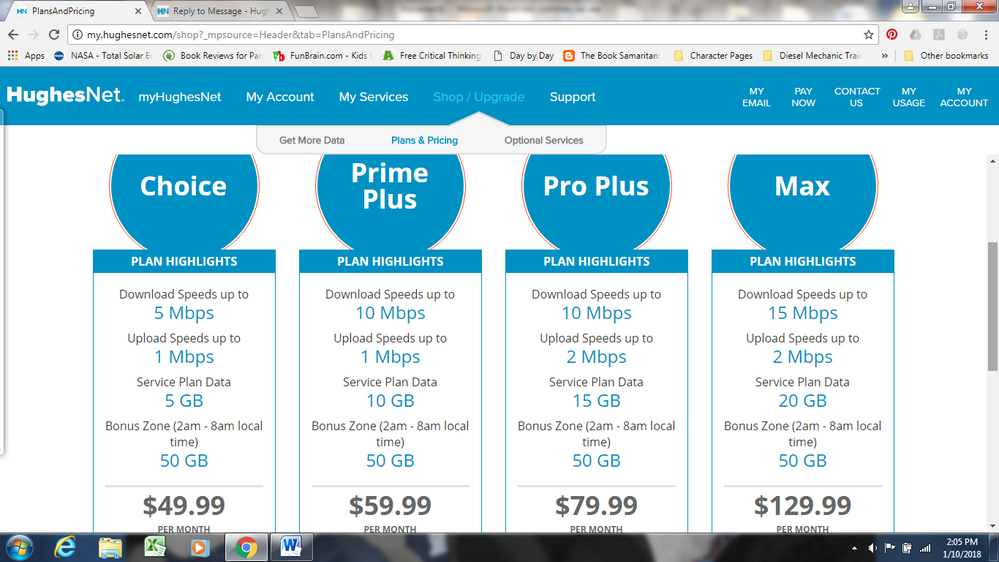 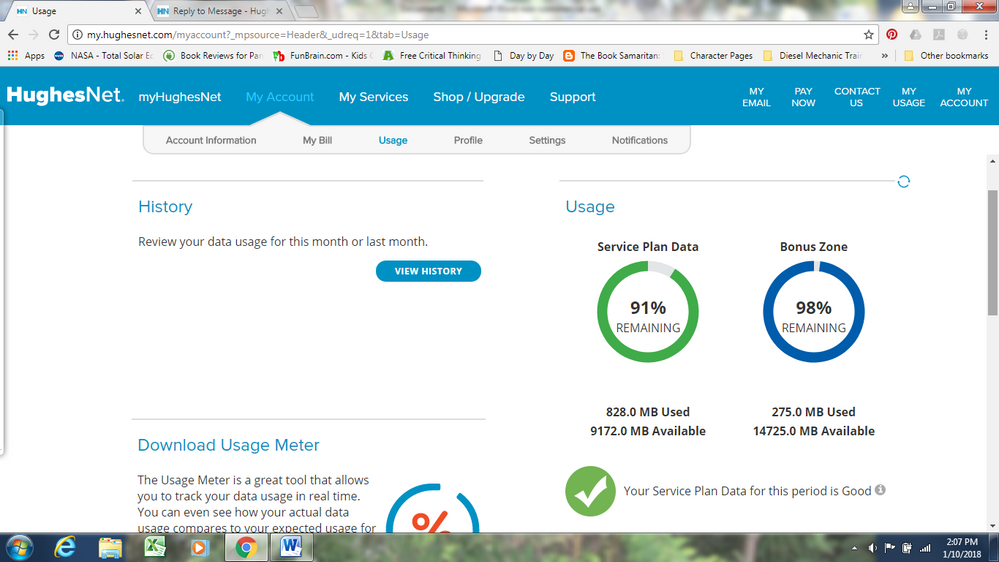 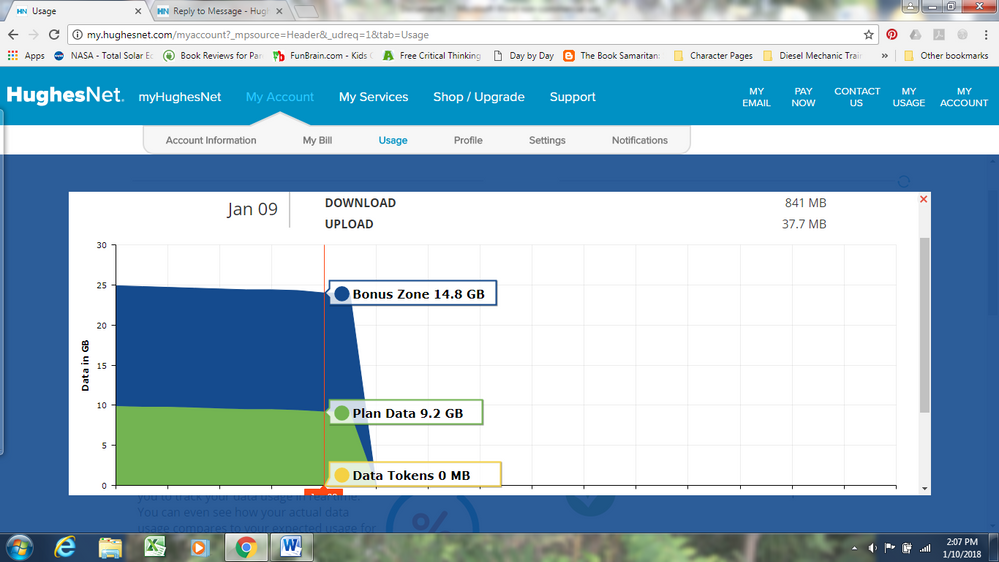 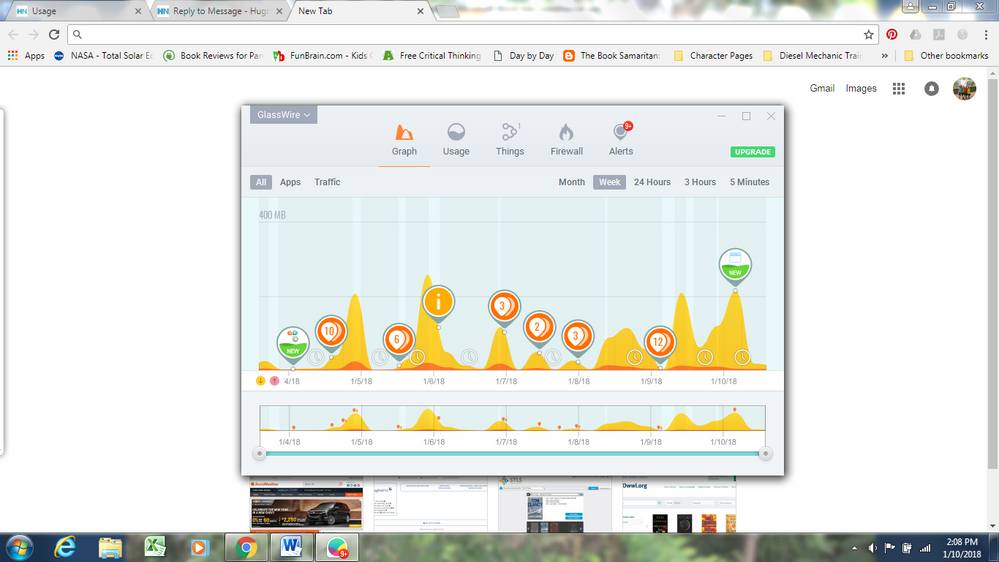 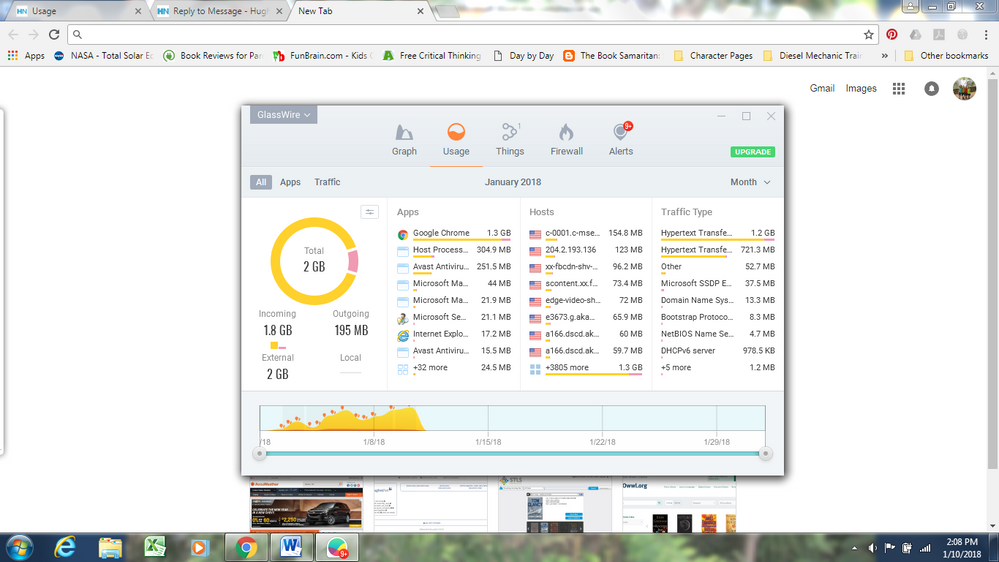