I completely understand.  I'm so sorry to hear that.

Try to stay strong in spirit.  Though I can only speak for myself, I have no doubt that everyone is rooting for you and sending some prayers your way.

So far the data comparisons between HughesNet's tally and Glasswire's looks great, and you're still making me jealous of that.  LOL.  Heck, it's just short of a 2:1 ratio!  That's awesome.

As for the plans, to be honest, I didn't really know that those with Gen4 plans could still upgrade to larger Gen4 plans.  I thought any upgrades now could only be to Gen5, but that you can upgrade your Gen4 plan is pretty nice.  That was just an assumption, though, and not based on anything I've read.  And it appears that it was an incorrect assumption, as well.  At least that way you're sticking with what's working for you and not taking a gamble on what seems to NOT be working very well for quite a few people.

I think when upgrading to the Prime Plus plan the only thing that would change is the bonus data, and the price, of course, from whatever you pay now to the price that's showing.  I don't know if you lease, but if you do I'm sure the lease fee would be the same.  I think you continue to use the same modem, as well, and I don't think anything else changes, so your service should still be the same.  Also, I think upgrading puts you in a new contract, but I don't want to give you incorrect information on that.  I'm going to tag Liz and Amanda to make sure that the info I'm giving you about upgrading your Gen4 plan is correct.   @Liz @Amanda

Edit:  Regarding the beams, each satellite divides the areas it is providing service to into beams.  Kind of like if the satellite had a bunch of flashlights shining down, and each flashlight shined on a different area.  Each beam also supports a certain amount of throughput, and if a lot more people receive service within a beam than the beam can really provide service for, the service starts to be affected for those in that beam, in the manner of the speeds being slower.  Sort of like a road having a little more traffic on it than it can handle, so the traffic slows a bit.  Way too much traffic and it slows to a crawl.  The satellite itself only has so much throughput, and when it gets past a certain number of active users it can start to be affected, just like the individual beam, only the satellite being crowded affects everyone, whereas the beam being crowded only affects those in that particular beam.  And when I say affected, I'm again talking about the speeds slowing.

To give you a better idea about the beams, the following is the beam (Echostar 17, Beam 25) over what I believe is your area.  Anyone within that beam footprint can get service from that beam, but the closer to the center the stronger your signal will be.  That doesn't mean that those that are farther out will have slower service, but only that their service may be affected by bad weather a little easier than those closer to the center. 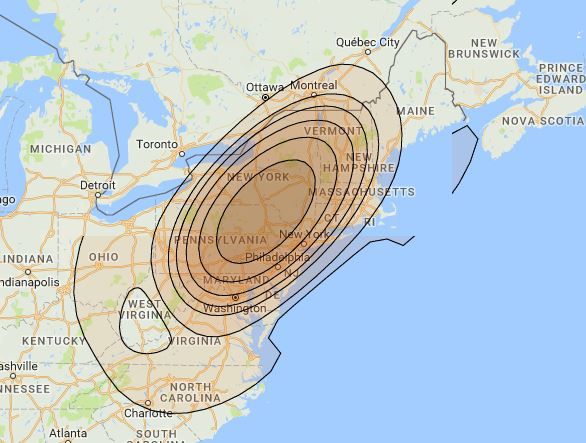 I'm glad you found the community, thank you for posting and working with the experienced members here. You won't lose anything if you upgrade to the Prime Plus plan, for example.You'd be paying the same price as you are now, but for 50 GB Bonus Bytes. What you see there in the plans available are the plans you're able to switch to. Gen 5 is always another option, but you certainly can still stay on Gen 4. Hope that helps!

Thanks for chiming in Liz.  I am going to wait on making any changes until after this data cycle, so we can make sure nothing else impacts the data for this month.

Next molnth, I may switch it to get the extra overnight data.  Believe it or not, but I actually do depend on that data some months, lol.

Current data stats.  Some time in the next day or week, the data depletion *should* ramp up.  Now, I'm not sure how to "prove" that the data depletion is a result of pages counting for more data than they normally do, vs me just using it more.  You'll just have to trust me on that I guess.

I haven't been on too much.  I spent most of the day yesterday watching movies with the kids, wrecking my New Year's Resolution to eat healthier, and then cheering on the Patriots.  Not much time for internet surfing, lol. 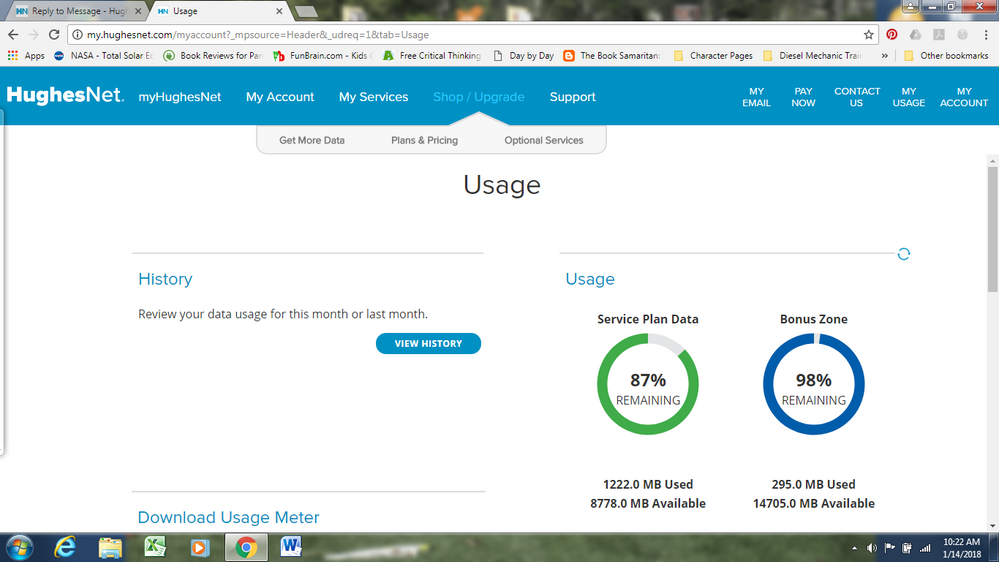 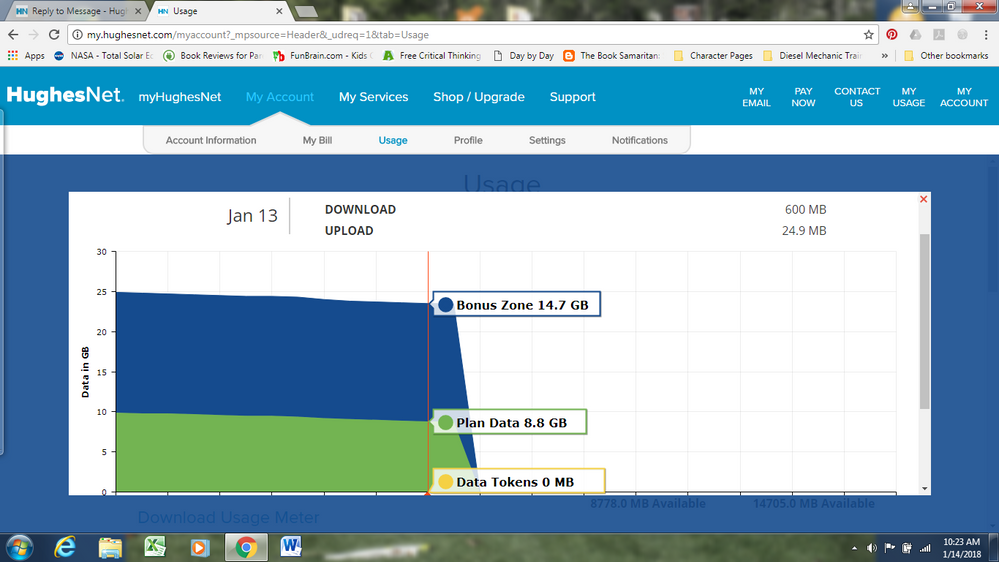 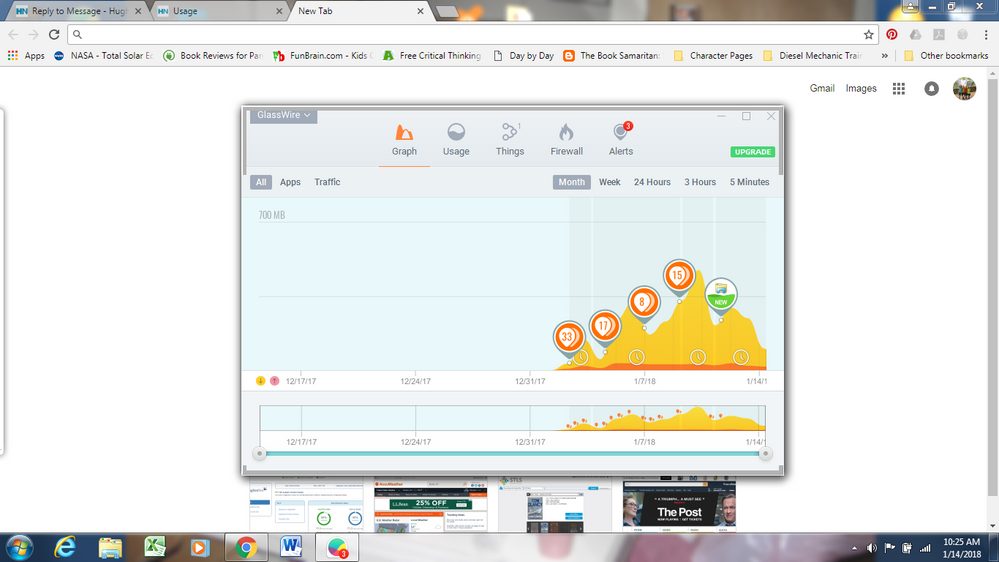 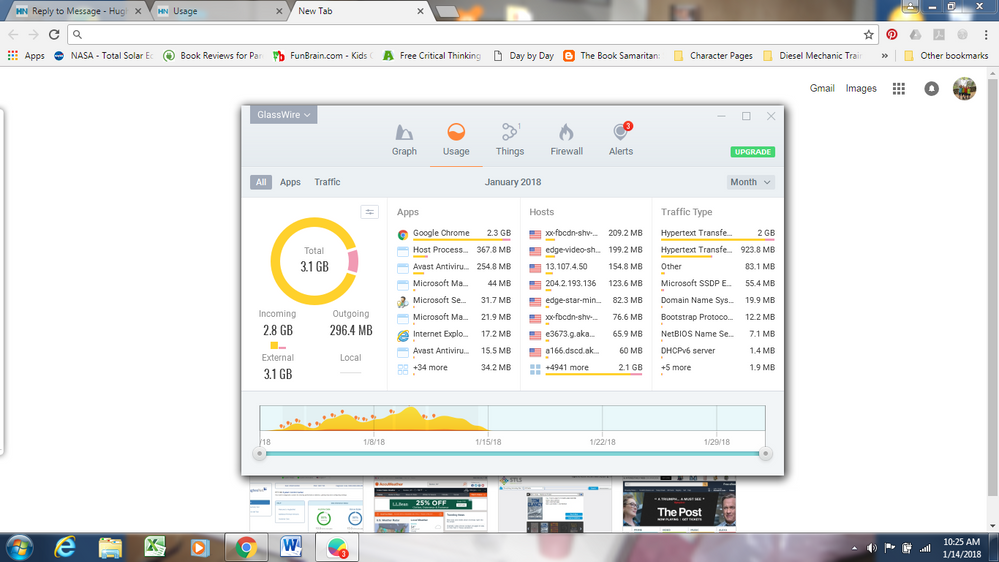 We are probably in the third concentric circle of that graph you posted, Gabe.  Maybe right even on the line of the 2nd/3rd.  So we're not terribly far, but also not terribly close either.

Our Mennonite Neighbor is going to be looking into requesting Empire Access expand their network into our part of town.  It's a long story but...I do some side consultation work for them and even though THEY can't/won't benefit from hard-wired internet, I would.  And if it benefits me, it would indirectly benefit them.  So fingers crossed...though I'm not sure what I would be losing (somebody earlier up thread mentioned that the DSL/hard-wired internet is much slower).

Funny thing is...I live in this teeny tiny bubble that does not have hard-wired internet access.  Everywhere around us has it.  Literally 1/8th of a mile south of us, our neighbor has it.  And 1/2 mile north of us, they have it up there.  And 1/4 mile to our east, is hard-wired.

From what I understand, these people that are on the edge of the wire have crappy internet.  I really don't know.  Just that, when I called Verizon 6 years ago, and BEGGED them to run the line just a bit further...they told me that it wouldn't work.  That our neighbor, for example, has really slow connection speeds because of how far they are from whatever it is they need to be close to (sorry for the awesome tech language...lol...clearly I have no idea what I'm talking about).

Since then, Empire Access has been running high speed internet through the area and expanding.  Just not to our part of town.  So hopefully, if this mennonite neighbor asks for it...they'll run it.  He's a fairly large business and maybe that will push them to agree.  Fingers crossed, right?

What I would give to have access to good, high-speed, unlimited internet access.  It would literally change our lives.  I would have access to online classes for both myself and the kids' homeschooling.  It would impact our science and history lessons in a huge way.

I don't blame you.  If I had high speed wired access here I would switch.  That's nothing against HughesNet, but only the realities of today.  If I had wired internet it would help to change my life a little in ways that it wouldn't for most, and if NY state comes through with their Broadband For All plan, that might happen. I've been in contact with them and they say that my area is in "Block III" of the plan, so I'm keeping my fingers crossed, too!  I, too, have people right up the road that have wired access (cable), but it wasn't financially advantageous for the cable company to run it down my road, as it's a half mile, dead end road with seven houses on it (five at the time of them running the lines).  And, yeah, wired internet, or at least some of it, is restricted by cable length from the source.  I think DSL is about 15,000 feet, or something like that.

And though the ability to stream on a regular basis would be very nice, the ability to utilize the "Ticket to Work" program, which requires stable high speed internet, is my biggest reason for wanting it.

"Now, I'm not sure how to "prove" that the data depletion is a result of pages counting for more data than they normally do, vs me just using it more"

Let me start off by saying that i'm not big fan of the "History" meters ... that will be the second screenshot in your post above.

Instead I would rely more the SCC "Usage" meter and/or the MyAccount "usage" meter.

The SCC usage meter can be found by entering 192.168.0.1 into your browsers address bar: 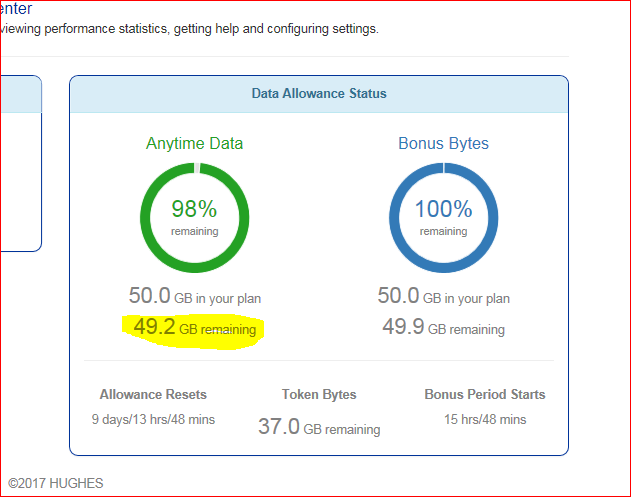 The above meter has the advantage that it resides "inside" the Hughes Modem ........right at the end of the Ethernet cable.

The MyAccount Meter at the same time is as follows: 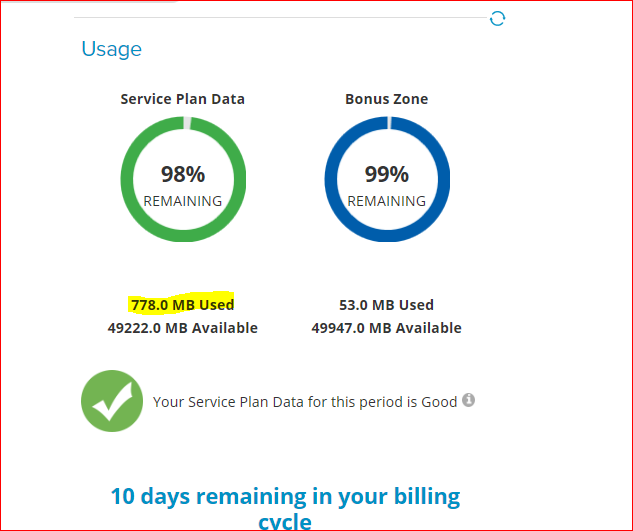 It shows 778 MB used. Close enough and the rounding error will never be off more that 50 MB.

Taking a screengrab and noting the time will show the data available/used at that given time. Taking a second shot later and calculating the difference will give data used between the two points.

That brings us to Glasswire and the "sliders" that can be used to show what programs and processes used what and when:

I turned my laptop on this morning but didn't open a browser. Note the time period at top center. Look at the list of background stuff that used data before I actually opened any programs: 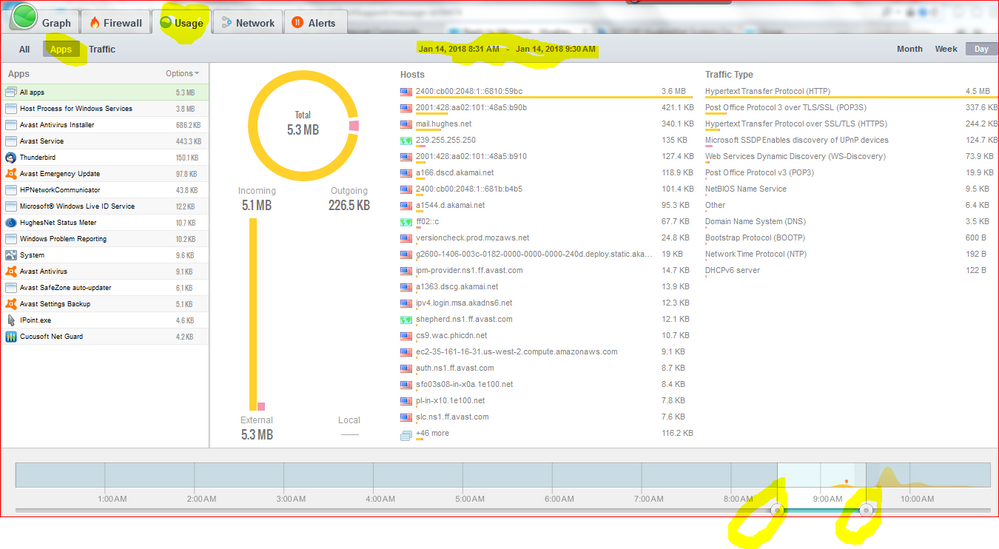 Later I opened browsers and such, I moved the right hand slider to include that time period: 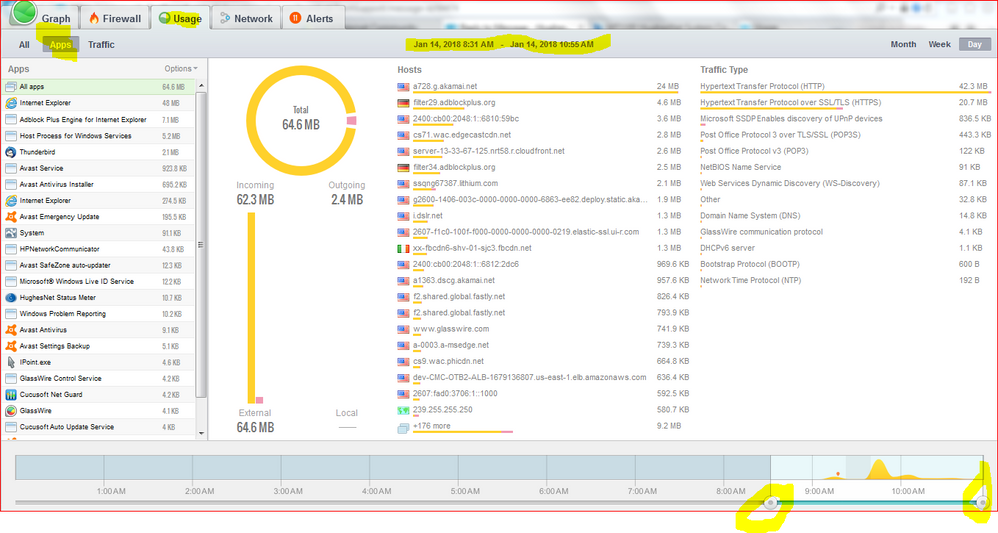 Once you get a glasswire history going we can compare usage by a program and by processes to see changes and then go after the root cause.

Sorry for being MIA the last two days!  Lots going on around here, lol.

So here are the current stats.  Gwalk, is there anything else I need to be doing right now, to establish that Glasswire history?  Other than just posting what it looks like?  I understand how to use the sliders.  (BTW, the main reason I haven't posted the System Control meter is because it shows my SAN and I was being lazy, lol.  That said...I have found the data shown there to be very consistent with the data shown on the Usage meter). 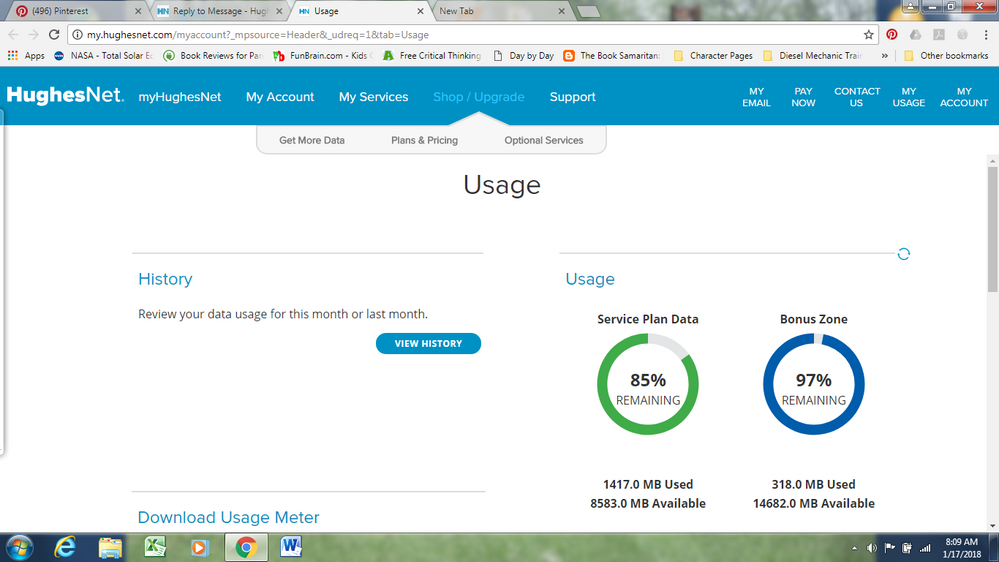 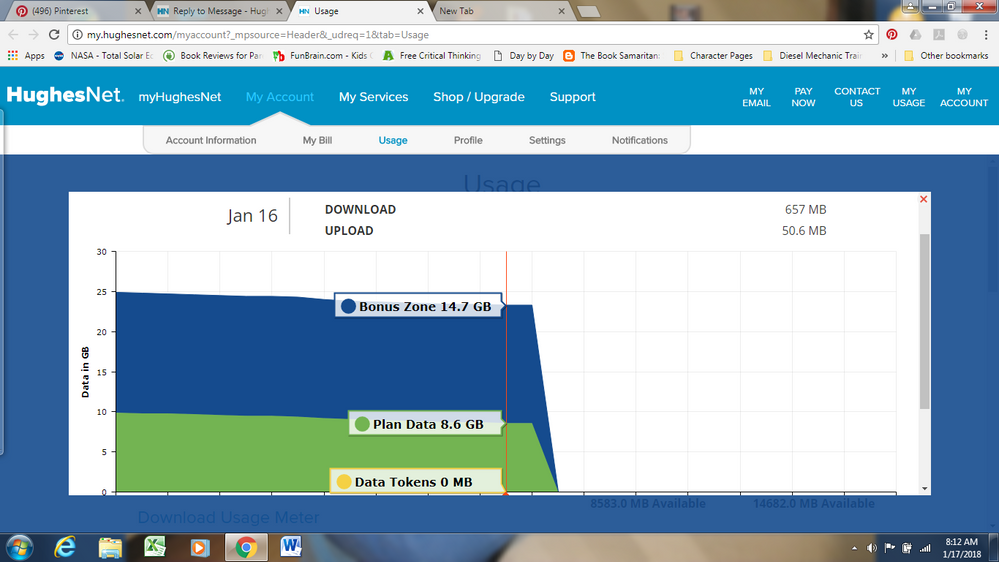 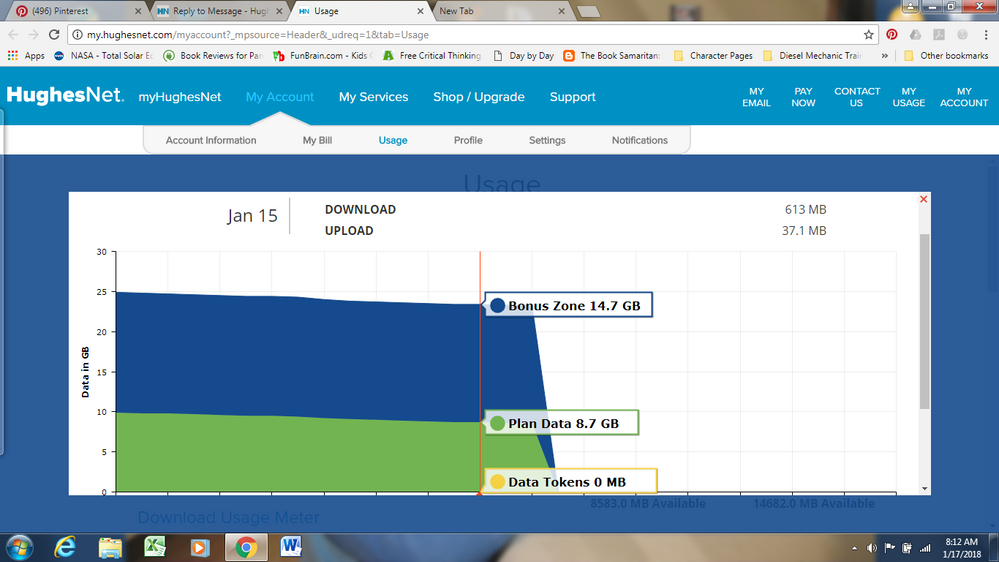 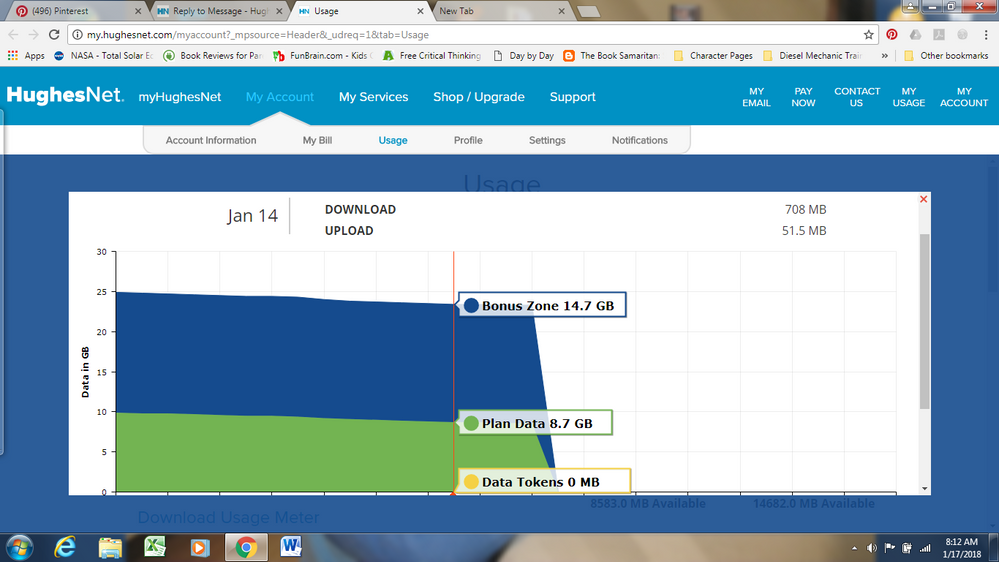 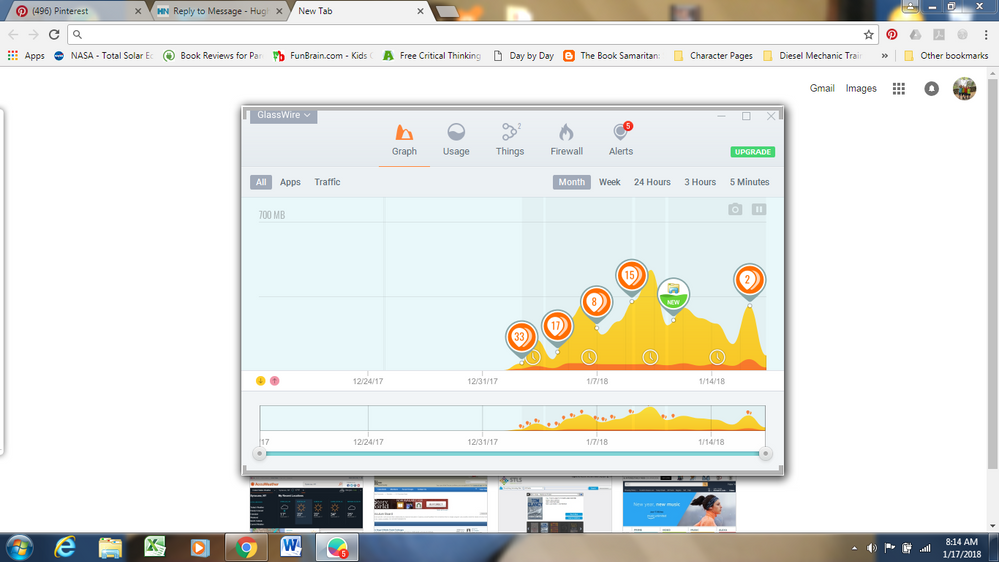 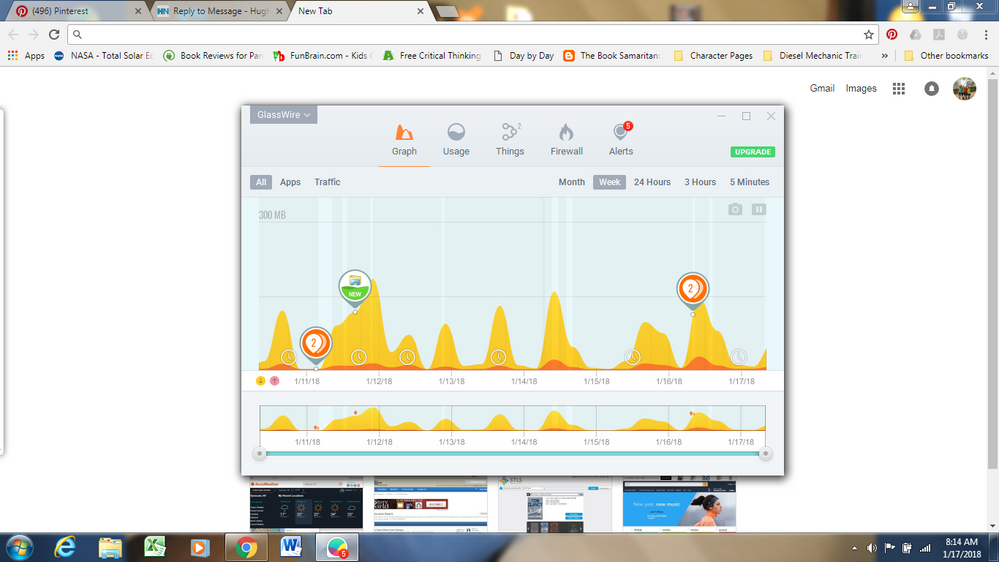 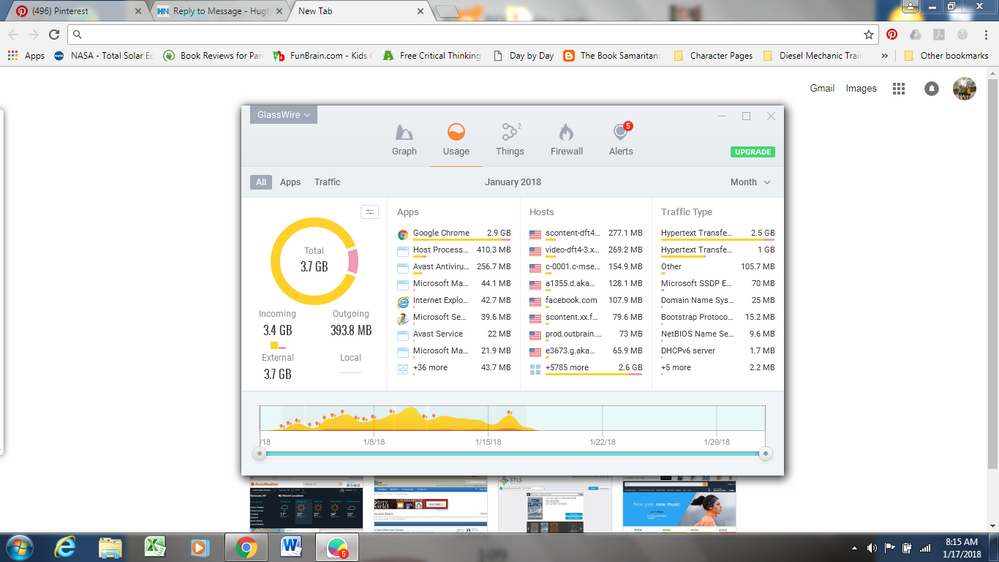 Your  biggest user is Chrome.

One point of concern is that you never show any periods of "disconnect" if you look at your usage time line in the last picture.

Perhaps @GabeU can pop in and show you how to zero in on Chrome and see what aspect of Chrome is using the greatest amount  so we can dig deeper.