I think they're just trying to get me to subscribe to the 50GB plan, but I'm still spending less $ with the 30GB plan and purchasing extra tokens.

They aren't.  HughesNet has no control over how quickly your data is used.

You're likely seeing higher data usage with Gen5 for two main reasons.  First, higher available speed means more data usage with many websites and program/apps, and second, Gen4 seems to have had better data compression.  i.e. what you're being "charged" for, data wise, very likely more closely resembles your actual usage with Gen5 than it did with Gen4.  Why this is I don't know, but I suspect it has to do with improving technologies to increase both the speed and capacity of the system as well as further attempting to mitigate the effects of latency on various applications.

With this said, that's only to a certain extent.  28% of your data being used in two days suggests something else.

The interesting thing is that, once we're depleted our Data Allowance within 20 days or so, I don't notice any change in speed/accessibility...like I've been getting the downgraded stuff all along.

You'd likely only notice a real difference with activities that utilize the highest available speed at the time and with them taking longer once your speed is throttled.  For most basic activities the difference would be minimal, if there's any difference at all.

That's all good to know, GabeU!

I watch a lot of Dateline and Snapped, and it's even crossed my mind that someone nearby could be using our signal!  lol  But the nearest neighbors are hardly close by enough to hear ya scream, much less use yer wifi...lol  (and hence the need for Hughesnet!)  But hey...maybe I should change our wifi password--wouldn't it be crazy if that solved the problem!  lol

I guess it's time to either accept the situation and move on...or look further into Glasswire!

And if this is the worse problem I've got going on right now, I am Blessed!  lol

Changing your WiFi password can never hurt.  But I'd still keep looking, as nearly 9GB in two days is still significant without deliberately doing something that would use that much.

I think the OP's best bet is to stop trying to guess where data is going and actually measure where it is going by installing Glasswire or a router that tracks this kind of stuff. Conjecture won't lead to a solution.

Sage advice!  I haven't checked into the cost of Glasswire yet, but at the rate we're losing data and having to buy more each month, I'm guessing it would quickly pay for itself! lol

I appreciate both you guys' interest and advice!

I'm THERE dude!   hahahahaha  Thanks for that info!  I wasn't sure WHAT I might be getting into...lol  Now, whether or not I'm tech-savvy enough to understand what it will reveal, or act upon it, is a whole 'nother matter...lol

LIke maratsade said, you only need the free version.  It's available for both Windows PCs and Android devices, with the Android version being available on Google Play.

After you've installed it and it's running, make sure to set the options to "Incoming & Outgoing" and "External".  This way it will tally both upload and download, and only that which is being used via the internet rather than including data being transferred back and forth in your PC. 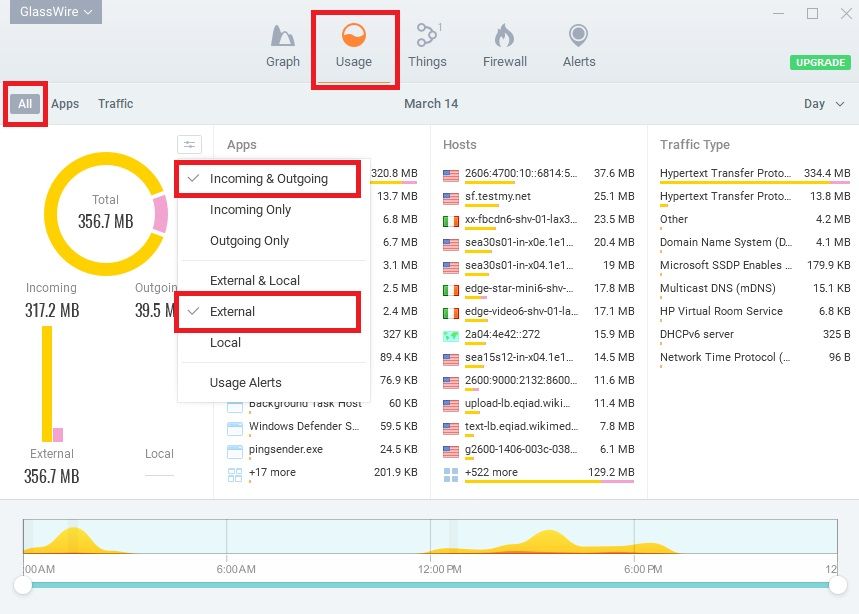 Okay, GabeU...once I've done all of this, I'm gonna be relying on you and maratsade to interpret the results!  lol

I'm not sure what I'm looking at, but it's running!