I'm starting to wonder myself. I have unplugged everything, not just turned off but unplugged and checked my data before going out of town and after returning a few days later my data is lower. Something is using data while I have absolutely nothing plugged in.

"Something is using data while I have absolutely nothing plugged in."

Something may be using data wirelessly. Unplug the modem. No modem, no data usage.

My service is so sad and slow I can't even open the modems page. It said check internet connection. And I'm on high-speed, last month when my high speed ran out my service actually got faster. The average speed test went from 1.6mbs to 2.8mbs

MarkJFine
Professor
In response to Tonyclarke

My service is so sad and slow I can't even open the modems page. It said check internet connection.

The modem's page is a direct connection on your LAN and is completely independent of dish communications. This suggests that your problem has nothing to do with anything past the modem. Suggest you see what in your home (or on your computer for that matter) is hogging all of the LAN bandwidth to cause slowness.

But since this has nil to do with original poster's issue, the point is moot. You should keep your whiging to your own post.

Tonyclarke
Freshman
In response to MarkJFine

Well considering the topic is data loss when equipment is broke and I'm losing data when equipment is unplugged maybe I thought it was relevant. So you can keep.your personal comments to yourself. Explain This professor, I left on the 7th, I unplugged my modem the evening if the 6th. I came home on the 11th. Plugged it back in on the morning of the 13th

You will need to demonstrate the issue by following the protocol detailed below.  This is required to have the issue addressed by the HughesNet techs.

Please perform the following test outlined in the graphic below, though follow the full instructions written below the graphic. This is known as a Modem Isolation Test, and it will help to determine whether the issue is with HughesNet or your local network.. The screenshots should look similar to the following, being dependent on the operating system, with the system clock included (you can move the System Control Center data level window to being near the system clock so that it is included more easily). 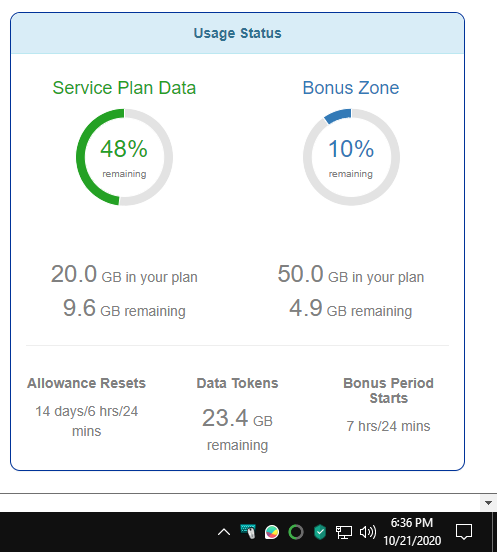 Do not unplug, power cycle or internally reboot the modem after the test has been run, as the reps need to be able to reconcile your modem data logs with what is shown in the screenshots. Any of those three things will wipe out those logs, rendering the test results moot. Only after the reps have responded with their findings should any of those three things be done.

Please be aware that, if you downloaded any large files just prior to this test, some usage may appear to have occurred due to the slight delay (lag) in the modem reporting the data usage to the server, but it should be rather negligible.

If you don't know how to disable the WiFi in the HT2000W, please see "How do I manage my built-in WiFi modem?" in this PDF. Please be sure to click "Save Settings" after unchecking "SSID Enable" for each of the four tabs individually (2.4Ghz, then 2.4Ghz Guest, then 5Ghz, then 5Ghz Guest).

Before your posts were combined into one topic you had piggybacked on someone else's topic that had nothing to do with yours.  So you can keep your personal comments to yourself.

Explain This professor, I left on the 7th, I unplugged my modem the evening if the 6th. I came home on the 11th. Plugged it back in on the morning of the 13th

Let me guess, you're looking at the monthly data graph.  That graph isn't accurate per day.

Data cannot be used, nor deducted from your account, while the modem is not powered.  It is a factual impossibility.

I am still in high speed service I have used 17gbs in three days, how I dont know because look at my speed. How can I use that much data at this speed? My signal constantly cuts in and out. I've called half a dozen times and had tech out here twice. They say everything is working as it should.

Even at sub 1Mbps speeds it's possible to use that much data in three days.  In fact, even at 0.55Mbps, which is right in between the two speeds you posted, 17GB would be used in 73 hours, or right around three days.  With that said, those speeds are VERY low for Gen5 service when you still have plan data.  Too low.

Regarding what you were told by the sales rep, I would request a sales call review to determine if the sales person set appropriate expectations during the sales call.  Depending on what's determined, you may have recourse.

As for streaming, HughesNet is definitely not made for regular streaming.  Streaming can use upwards of 3GB or more per hour with HD streaming, and even with the largest plan of 50GB, that's just over 16 hours of streaming before you would run out of data.  Even in SD, which uses around 700MB or so per hour, that's still only around 71 hours, and that's ONLY the streaming.  Anything else you'd use the service for would reduce that.  It may be possible to stream in SD even after one runs out of plan data, however, as the throttled speed may be still be high enough.

Even if they're able to get your speed up to a more acceptable level, you'll still be constrained by the amount of high speed data in your plan, so unless you have an alternate service with either unlimited or a considerably higher data allowance available to you, which is unlikely being that you signed up for HughesNet, satellite is going to be your only real option for TV, as in DirecTV or Dish Network.

Again, I'd ask for a sales call review.  To do so, you should start a new topic in the myAccount and Billing section and ask for it.  When you do, make sure to explain why you're asking for it, as in the sales person saying that it was viable for regular TV streaming.