It's pretty evident how the thread meandered off topic. I'd like to have a meter that shows how close I am to exceeding my alloted data and I'd prefer one that is consistantly accurate.

The current meter is accurate, it pulls data directly from the modem, just like the old meter did.  However, it displays everything in a reversed order now... Instead of displaying how much you use on X day, it displays how much was available at the end of X day.

As far as the whole, "how close am I to going over" thing, it will still alert you if it expects you to go over your monthly allowance. 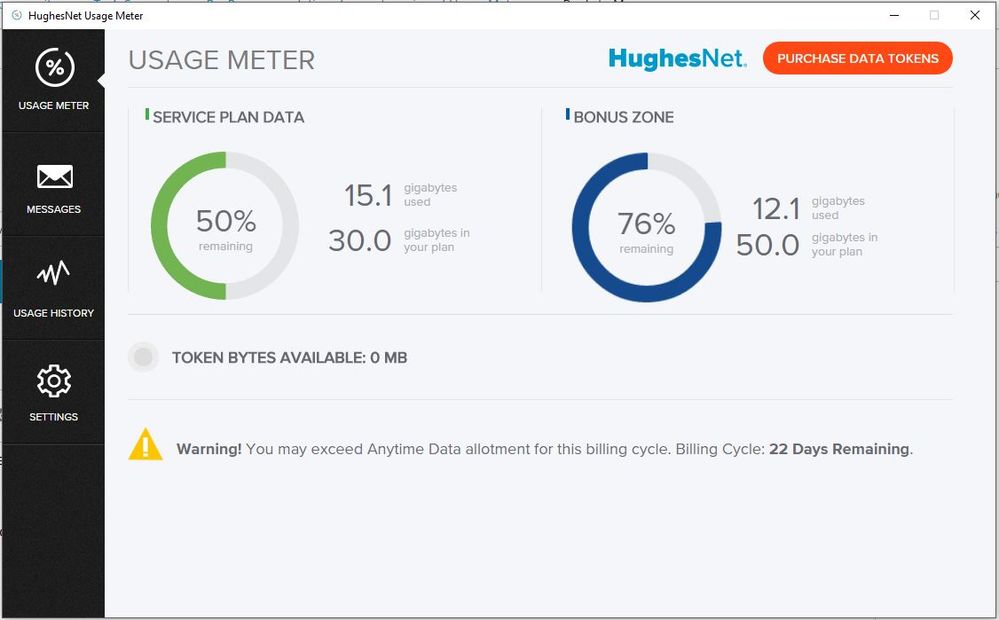 An inability to read a graph is why I start with better than 100 gigs?

Care to show a screenshot to help us understand where and why you're seeing this?  Like I said, the meter polls the modem directly for information, parses that information, and displays it to you...
http://192.168.0.1/api/home/usage

I'm going to say this for a third time in a different way, since it usually takes three tries before you finally get it...

It's a stacked graph, meaning everything is added together. Yes, you are starting with:

It's simple math. If you're saying that's not an accurate statement then Hughes clearly has you configured for the wrong plan and that needs to be fixed.

But just because something is being displayed in a different way than you expect it (or understand it) doesn't make it inaccurate. Why is this so hard?

You can explain it all you want, that's not going to make the graph useful. I can see that tokens, service, and bonus are added together for a total of over 100 gigs. That's redundant! There is already a line indicating a total of each individual type of data so once they are added together how do I tell what daily usage is of service data? Did I start with 107 gigs of bonus data? That's what the blue line on the graph shows. It also shows that I started with approximately 57 gigs of service data. I understand that it represents the total amount of data but maybe I'd like to know how much service data I have to the end of the month so I don't use the tokens. I have to subtract 7.3 of token data from the 22.2 of service data I have left. That tells me I have 15.4 gigs of service data left until I get into the bonus data. But on the usage meter it says I've only used 28.8 gigs of 50 gigs of service data while it says I have 42% remaining which is not the true amount of ONLY service data remaining. 15.4 is not 42% of 50! Hughes is a big company with smart people. Someone there should be able to come up with  a single page that has this information on it. Someone should be able to put the information back on one page like it was before without this silly graph. I shouldn't have to decipher my data usage from two different pages and subtract my token data, which I’d like to save, but that’s what I have to do.

I’ve paid Hughes a lot of money over more than 10 years which means I’m not going to settle for this useless crap. I will continue to let them know that the change they made was for the worse which, apparently, is a common consensus. I also don’t appreciate the innuendo that I’m slow to understand how this ridiculous graph works. I don’t need to take that crap from anyone. I understand that this method of measuring my data usage is useless to me. And responding to posts about the deficiencies of this meter and the fact that it is often grossly in error is how this thread continued on the topic of meter design. I hope this helps.

Here is the graph with the error. Open and closing a few times corrects it. 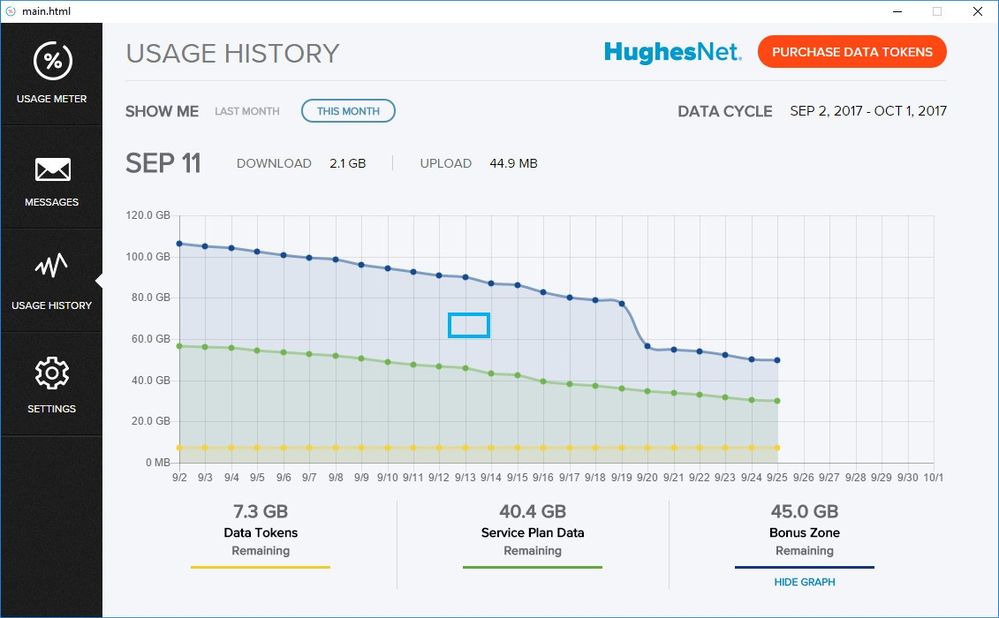 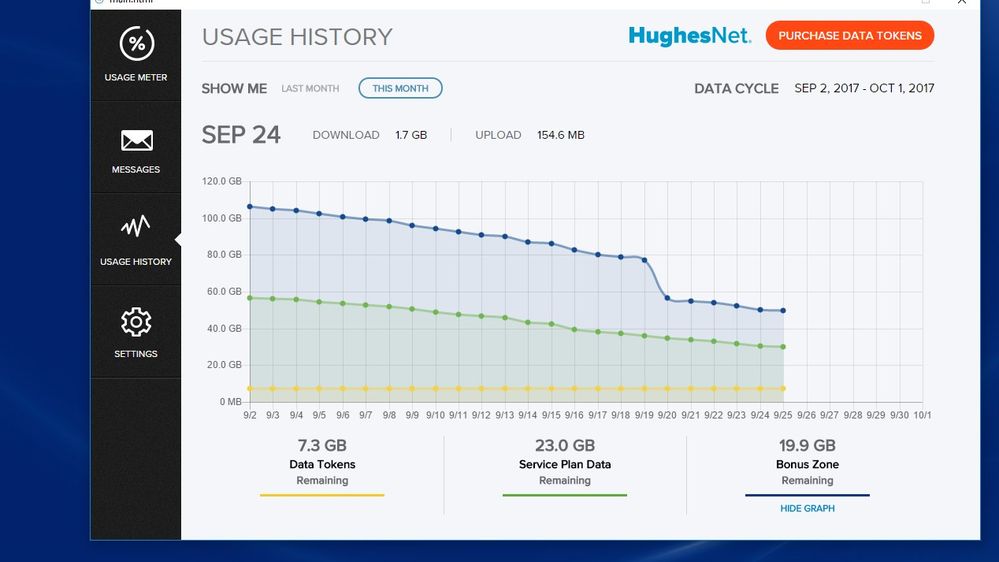 How much service data only? 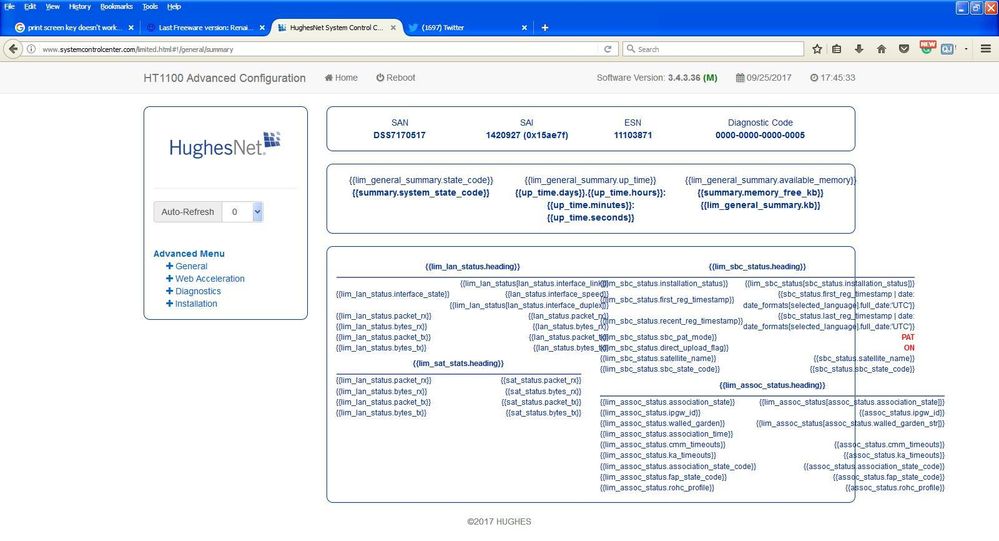 If this can error, can data?

You can explain it all you want, that's not going to make the graph useful. I can see that tokens, service, and bonus are added together for a total of over 100 gigs. That's redundant! There is already a line indicating a total of each individual type of data so once they are added together how do I tell what daily usage is of service data? Did I start with 107 gigs of bonus data? That's what the blue line on the graph shows. It also shows that I started with

Not useful is NOT the same as inaccurate, and judging by what you've said, you really don't know how to read a stacked graph, as I've been saying all along. It does NOT say you have 107 GB of Bonus data as any rational person would be able to figure it out.

I'm done knocking my head against a wall trying to explain simple concepts to you. If you think you know better than everyone here, including those that have looked at and modified the code, and knows how it works (e.g., me), have at it.

That's not an error with the modem firmware, Firefox introduced some changed in one of the more recent versions, think it was v54.x that has broken the WebGUI.

That aside, the WebGUI is NOT where the data is drawn from.  As Mark said, it's a stacked graph, I don't see any error in your history graphs either.  In one image you hovered over the 11th on the graph, which the information at the bottom updates to show the remaining for that date.  The second image you hovered your mouse over the 24th, which again, appears to be accurate in how it displays on the stacked bar graph according to what is shown remaining at the bottom.

Hover over each dot, the bottom of the Usage History updates for that day in particular, not that hard.

If you want the graph to only show your service plan data (and not the bonus zone data) you can click the “Hide Graph” link under Bonus Zone.  This will still show Data Tokens I imagine (I have no Tokens added on my account).   It would be nice if they add a Show / Hide Graph link for each group individually, then the Data Tokens amount can be removed from the graph and show only the Service Data remaining.

Like others are saying, you have to watch what day you have selected for the amounts to show your most recent data.  Take note to the date shown at the top of the graph (it’s in large print its hard to miss)  which indicates the date you have selected (Hovered Over).  So from what it looks the two screen shots are from two different dates, or you have different dates selected, making the data shown different.

They are from two different dates and I should have looked to see if I had saved one from the day before but I just didn't have the patience. When you have token data waiting to be used it adds itself to your bonus and service data.  When the bonus line is eliminated it still leaves the tokens and they are added to the service plan data. Before I realized that the first time I openned the graph, I didn't pay much attention to the start data, I was concerned about the current and end date. Quickly looking again I realized something didn't make sense. I didn't have 50 gigs service, I had 57 which I assumed were the tokens.  I have used up all the service data before and ended up purchasing more tokens than I needed which is why I have them now. Anyway, I was assuming I had 22.2 gigs of what was called 'anytime'  on the old meter and that's what you had. On this graph and meter, you have to know to subtract your bonus data to get the true amount of service data. I thought I had 22.2 but in reality I only had 15.4. I would like to save the bonus for some large download should the need arise but since I thought I had more, I played fast and lose with it, so to speak (higher resolutions, bigger videos, etc.) and may need the tokens.

I perferred the old meter which presented the anytime data above a time line. Tokens and bonus were completely seperate but also existed on the same page. It was easier to picture what you might have to save to make it to the reset date. Also, I've had the reset date extend over eleven days into the next month. I thought that since I had the data from last month it was feeding off that but nooo, after many reinstalls, the meter started over with me 12.4 gigs in the red. It took a lot of self control to stay off the 'net until the data caught up. I'm not entirely trusting of the system after all the strange errors. By coincidence, right this minute my graph tells me I have 49.4 service and 49.7 bonus. Data tokens are correct though. It will correct itself in a bit. I've already had two home tech call in the last two months so some things I've learned to live with.

At any rate, thank you for your advice.