OK, I give. I'll just pretend the lines really start at 100 and 50.  I should know by now, Hughes is always right. And the meter really isn't compatible with Windows 10. The other Hughe person told me that.

Pay no attention to this. It an allusion.

OK, I give. I'll just pretend the lines really start at 100 and 50.  I should know by now, Hughes is always right. And the meter really isn't compatible with Windows 10. The other Hughe person told me that.

Pay no attention to this. It an allusion.

Of course it doesn't start at 50 and 100.  You've got 7.3GB of Token data, so it starts at 7.3GB, 57.3GB and 107.3GB, for Token, Service and Bonus data, respectively.  Would it be beneficial for them to make it optional as to whether the Token data shows on the graph, like it is with the Bonus Zone data?  Sure, but at this time it's not.  What's showing for the beginning of your monthly data is accurate, as is what's showing for the 11th and 24th.

He's been trolling us all on full spin cycle for days. Ignore him.

I would like to see you start a new topic of your own on this subject. Reason being that this topic of Mark's was intended to have users suggest changes to the present "download Usage Meter". There are a large number of users, myself included, that thought that the latest version was a step backwards.

That being said .... there are in fact five (5) different usage "displays".

Three of the five are "usage" meters and the remaining two are "history" displays and the distinction is important.

Lets look at them. 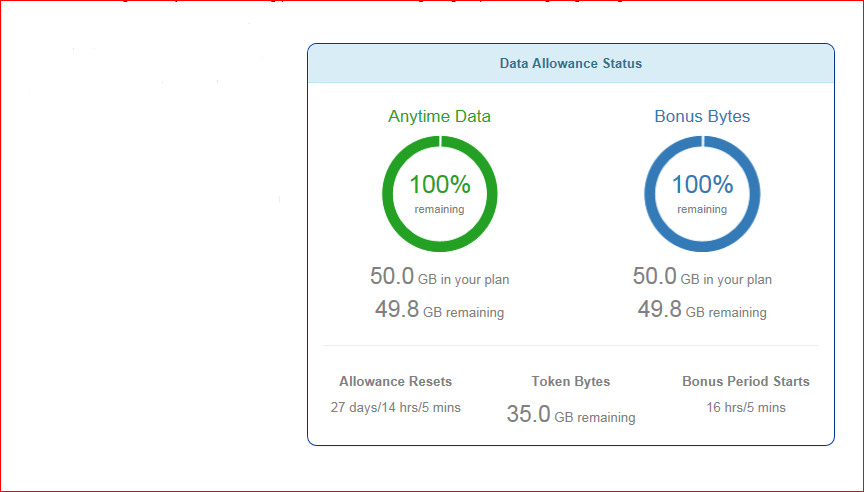 Hughes users can draw their data from THREE DATA BUCKETS:

This is where the potential confusing "stack" comes in as it totals all three categories.

The display above shows "plan limits" for Anytime and Bonus Bytes. It also shows remaining  data in all three categories.

The remaining data values will be up to date as of the last Modem "sync" cycle. The meter is not absolute "real time", there is some delay.

There is one thing to be aware of: The "resolution" of the meter is .1 GB (point one) or the nearest 100 MB. The meter is going to round up or down to the nearest 50 MB.

The meter also displays the time until the next "period" starts as well as time until next data reset.

The above meter is handy in that it is close at hand residing inside the Modem itself but it is not accurate to last MB.

The second (and most accurate) of the Usage Meters is found on the MyAccount page: 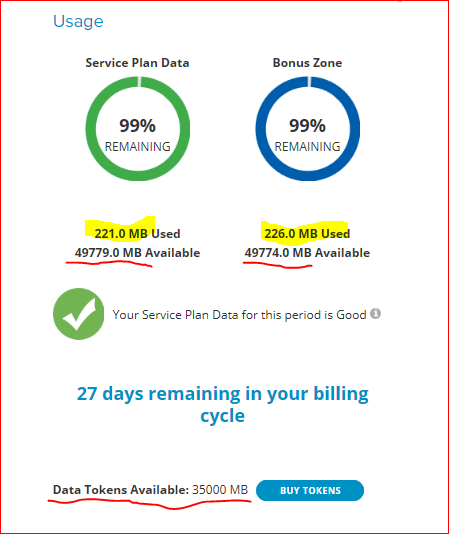 This is the "Mother Of All Meters"

This is the one that is taking into account data usage reported by the Modem and is used to update and "sync" all the other Usage and History displays.

It shows remaining data amounts  for Anytime, Bonus and Token data. It resolves down to a single MB. No rounding errors.

This is accurate to the last "sync" cycle.

This is the utility available for download that installs in you computers systray.

It contains both a "usage" meter as well as a "history" display.

I use an older version because ... I just don't like the new one. 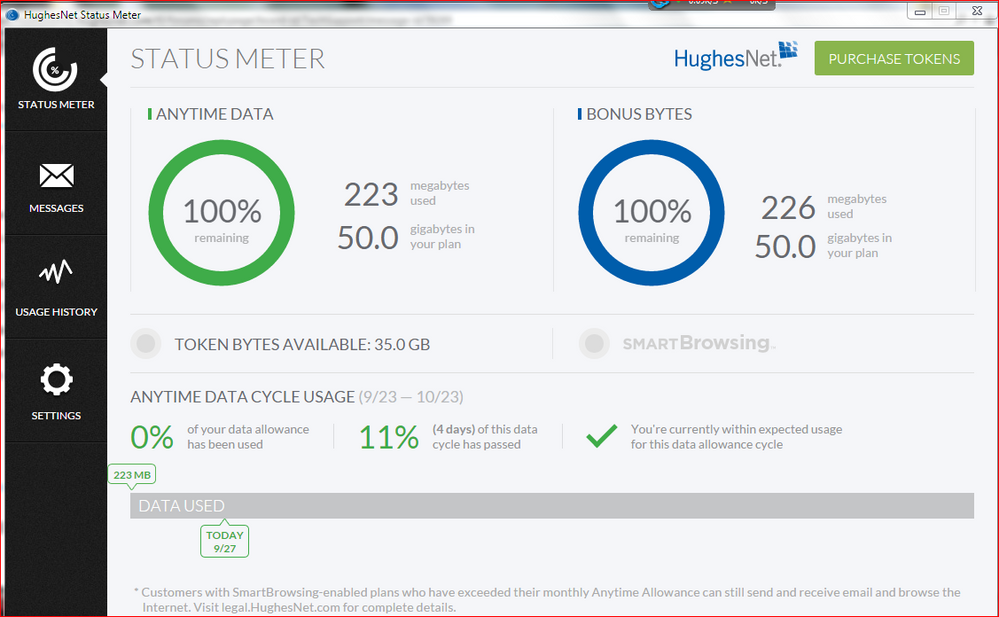 As a meter it shows remaining values for Anytime, Bonus Bytes and Token Bytes.

It too suffers from having a resolution of .1 GB so is subject to rounding errors.

Next up we have your Bug-a-boo meter that I think just tries too hard.

I am more than willing to take screenshots and discuss that meter with you if you were to start a new thread of your own. The information IS there, you just have pull it up. The previous version was better I think hence Marks topic for suggests for the next version.

You can get a very accurate accounting for "yesterdays" usage from it but I would suggest the the MyAccount Meter will give you the most up to date and accurate numbers of remaining data, right to the single MB.

I know this is aged but figured I'd attract the folks I troubled before. Yes, I did finally figure out the history and the meter. It misbehaved until a reboot and has been fine ever since. The problem, or question, is 'Is there any real time tracking of the data used from 8am to 2am? I had a Windows update that started automatically that I couldn't stop. At the same time, Playstation was downloading something, not quite sure what it was. And way, there was no way to tell the damage that had been done until the next 24 period, correct? What is distressing is that these two downloads used 17.7 gigs which I didn't find out until the next morning. This isn't a minor issue, at least to me. I used the more or less real time hours versus data used with the old meter.

Today is the 24th. What the Usage History gives me when the curser is on the 24th is data used the 23rd. With the curser on the 24th, it shows the data used on the 23rd and does not update until midnight. Is this correct? Nothing I'm missing? I also loaded the useage page associated with the community page and that doesn't update either. There is no way to find out you are going to exceed your data useage until you are already in trouble, right, wrong? It looks like a data tracking system that only needs checked once every 24 hours since it doesn't update until then. Any one else at issue with this?

This is late but timely. I was wrong and ticked that they took my meter away.  I have figured it out but I still don't like it as explained on another thread. Thanks taking the time to explain it to an obstinate person.

When you hover your pointer over the 24th and it shows that date above the graph, the data given is for the 24th, though I believe it's only through the last complete hour, so whatever you've done during the current hour won't be added to the total for today until the next hour starts.  For me it's presently 9:32PM, and it's only showing the data usage through 8:59PM. 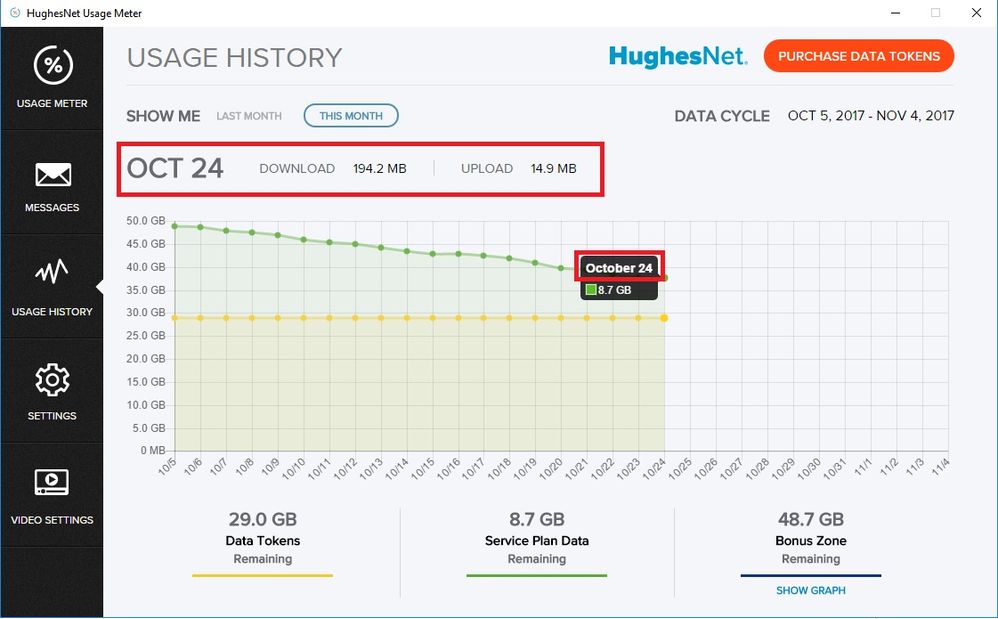 The History in the Usage Meter only loads one time, that's when the meter first opens.  It wont auto-refresh the data till I think the next day.

I've been online since about 5PM and checked the meter shortly after starting.  The usage tally is correct through 8:59PM.    I'll check again in fifteen minutes, when the hour changes.