Yet another thing...  testmy is very often "losing connection", then "reconnecting".  Sometimes multiple reconnects attempts... Quite a bit of that during one session a few minutes ago...

Here is another scn grab of results...

If I use the link (  https://testmy.net/db/Bm5VlNtRx  ), I get a report, but it is quite different from the first screen data when the test finishes: 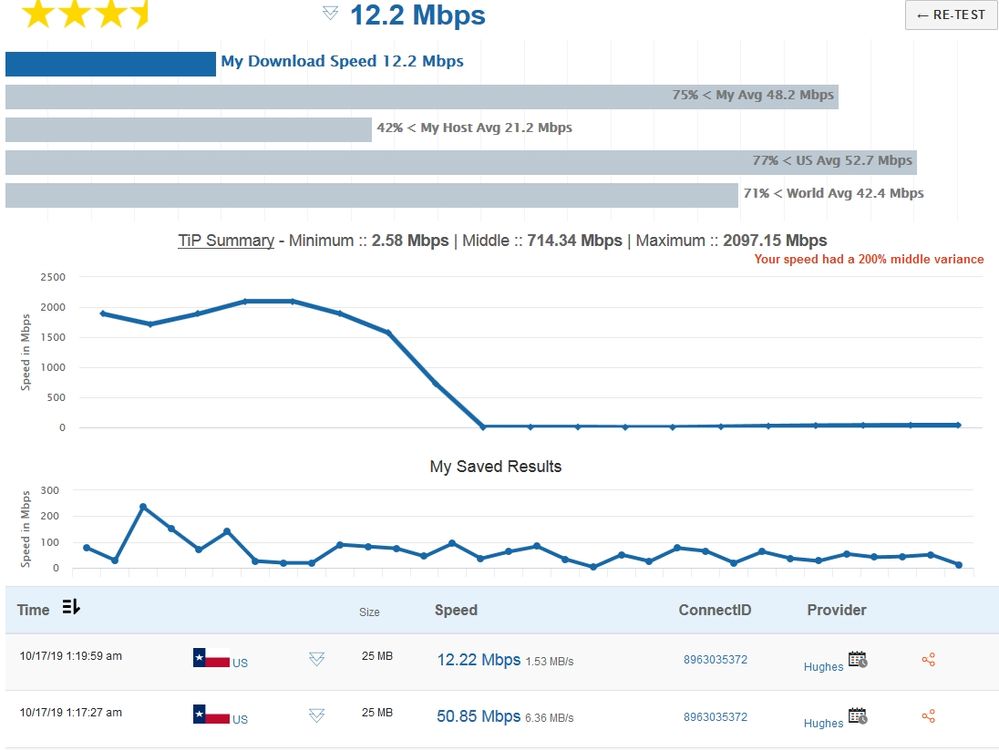 I'm seeing the same thing from the Results page, though with different times due to them showing correctly for me.

What I meant was the page where you got that snapshot of the single test   It should have showed some indication of it being a test for HughesNet internet.  Still, though, it shouldn't matter if it did or didn't.  Even if it didn't detect it as a HughesNet test it should still be showing up in your results, as it should show ALL tests you've run while being signed in, and that it doesn't is very odd.  But, it's possible that testmy is detecting that it's not a legitimate result with it being so wacky, so it's not saving it in your results.  I'm not really sure.

Again, though, whether it detected it as a HughesNet test or not doesn't really matter, so please disregard me even asking about that.  I'm overtired and was conflating that thought with something else.

There's no doubt that you've got some type of serious problem happening.  Not only should you not be seeing so many extreme results, you shouldn't be having any connection issues with the test.  Though I've had an occasional wacky result, that's something I've never seen.

I really hope the engineers can figure out just what in the heck is going on.

Edit:  I forgot to mention that I tried that video in the link you posted and it worked without issue.  Just another indication that something is seriously wrong with your service.

I wonder if the crazy graph on the test page is reflecting the connection issues, while the graph of the finished result, as in when you click on the TID for the test on your Results page, is eliminating those connection issues and is only showing the results from when the test was legitimately running?

Either way, it's an indication that something is VERY wrong.

I'm sure it's good that you're demonstrating all this, as the reps/engineers should know it.

I think I remember that we're going to the same gateway, and using the same nasty connection via CenturyLink.

I think what you're seeing are the dead gaps that CenturyLink is inserting, and it's showing up as very strange catch-and-release spikes in the tests.

I certainly agree that something is weird.  I hope  HN engineering will/can figure it out and correct it.   FWIW, performance isn't too bad right now (11 AM Eastern, 10-17-19.   As mentioned, sometimes the system works, just not too often or for too long.

First is the scn returned after the test.  Second is what I get after clicking the TID. 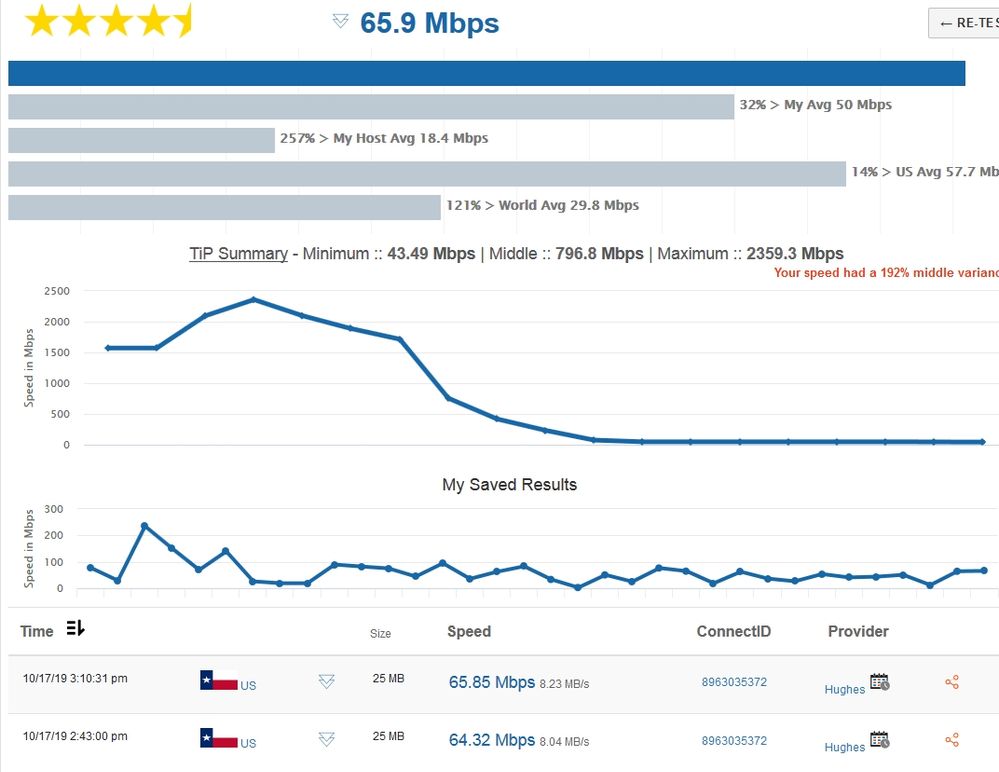 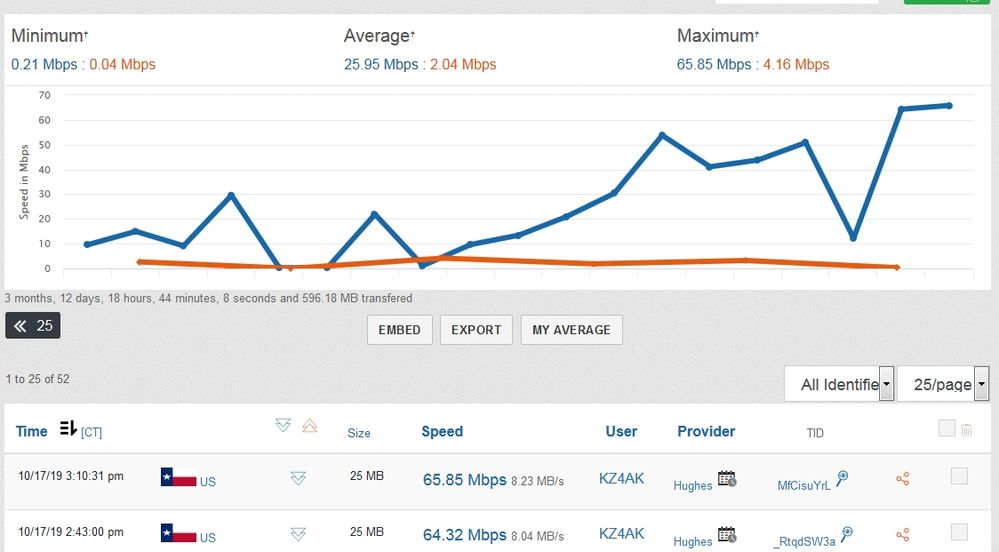 Thank you for providing me with these tests. I will now be escalating a case for you. Please allow 1-3 business days for our advanced technical department to reach out to you. I will also be private messaging you the case number to use if you call in before they reach out.

Observation:  Earlier, I was asked if I could see a reference to HN on testmy.   Yes and no...   No mention of HN when I login to testmy.  However, after a test, if I scroll to the bottom of the page, there is a clickable box for HN.  Clicking the link sends me to a page that mentions HN and has links for  up / download tests.  I tried it that way and noticed no difference ( https://testmy.net/db/VktXVI1c6  )

-  The initial test results page is still quite different from what is seen by going to the link -- still reporting the wacky, beyond reality, Mbps maximum.

I received a call from HN tech support.  They reported a number of issues similar to mine from my area.  A visit by a field tech has been scheduled for 22 October.   They indicated the tech may change my dish polarization.   I understand antenna polarization (e.g. vertical/horizontal/left-right circular), but uncertain what the implications may be for my connection.  The signal strength is typically =>100...

Unless this puts me on a different beam, not so hure how changing the polarization will fix the data delay issue.