When I got hughesnet installed. I was assured that 20 g would be more than enough for b 2 computers an 2 smartphones. We ran out with 12 days left in the cycle. We tried the steps you suggested as far as disconnecting everything. We purchased 5 g and overnight about 12 hours we had about 2.8 g left. They gave us 2 g more and now already down to about 1.04. Still have 6 days left. I've been using my mobile data. And son is not looking at youtube at all. Only snapchat, texting and Google
What gives!?!?!
Noone is up at 2am to use that data. Why can't some of that data be used anytime? I feel lied to. 20 g being used up so quickly the 2nd month we've had it. 1st mo. Was fine!!! Sounds a little suspicious to me.
Labels:
0 Kudos
5 REPLIES 5

Before you jump to conclusions about lying, you should test your equipment to see where data is going.  You will be required to run these tests and post results here in order for you to get help working on the issue.

The following thread may help you...

There are a plethora of things that can use data on your connected devices without you knowing.  Determining what those things are can be tricky, but it can be done with a little work.  There are adjustments that need to be made to your devices to make sure that they don't use any more data than is necessary.

Your first month was most likely fine because during your first twenty days of service your data allotment resets constantly.  Hughesnet does this as a courtesy to allow new customers to update/upgrade their devices and bring them current without it affecting what would be your normal monthly data allotment.  This is explained in the Welcome email sent by Hughenset.

Lastly, you weren't lied to.  The sales reps can only make an educated guess as to how much data someone will need.  There is no way for them to know everything you will do, nor do they know your device setups, and how much data those devices will use.

If you care to list your connected devices, we can help you to make the adjustments needed to save data.  You don't need to list exactly what you have, but just in general, like "A Windows 10 laptop, a Windows 8.1 desktop, Android Smart phones, and an iPad."  Like that.

1 android 1 iphone that is
0 Kudos

Okay.  With the two W10 PCs I can help, but not so much with the iPhone and Android phone.  Someone who has the latter two items might have some ideas.

This probably goes without saying, but the following would apply to both W10 computers, so you'll have to do each thing to each one.

First, on the Windows 10 PCs, it's best to not use the cloud (OneDrive), so if you are, you should turn that off.  If you have the Creators Update installed, you can actually now uninstall OneDrive.  If OneDrive is off you don't have to uninstall it, but I do it anyway just to be safe.

Syncing.  It would be best to turn syncing off between the two computers if there isn't some specific reason you need it on.  Go to Settings - Accounts - Sync Your Settings.  Turn "Sync Settings" off.

Updates from more than one place.  This is a BIG one.  This one is basically Microsoft deciding that YOUR data should be used to supply other people on the net with updates instead of them doing it.  If this setting is on, you could be updating all kinds of W10 computers on the net and using YOUR data to do so.  Go to Settings - Update & Security - Advanced Options (toward the bottom middle of the page) - Choose how updates are delivered (toward bottom of page).  Now, if you have the two Windows 10 PCs networked, you should leave it on and have "PCs on my local network" selected.  If they are not networked, just turn it OFF.  If they are networked and use the same Windows 10 updates, they can share them instead of having to download the updates for each.  I find this too much of a pain and not really worth the few hundred MBs it could save every month.  Plus, I rarely have all three of my W10 PCs on at the same time, which would be required for them to be able to share updates between them.  Again, I just turn it off.  But, whatever the case, DO NOT leave it set to "PCs on my local network, and PCs on the internet" and in the ON position.  I believe the default position for this setting is off, anyway, but it's best to check, to make sure.

Now, the rest is concerning apps and programs.  Again, you'll have to do the following for each computer.

It's a good idea to download an adblocker for your browser, and the most often used one is Adblock Plus.  There is a version for each brand of browser, but the site should auto detect which browser you are using.  After you've installed it, make sure to go into its settings and uncheck "Allow some non intrusive advertising".  That "non intrusive" advertising can add up, so it's best to not even allow it.  Also make sure the Easy List is checked.  It comes with Easy List, and that's the easiest (no pun intended) to use.  https://adblockplus.org/

Next is monitoring the data usage on the computer, and for this we use Glasswire.   Download the free version.  This comes in handy when you seem to be using a lot of data.  You can see just how much data your computer is using and just what's using it, including programs, apps and Windows services, such as updates.  When installed, make sure to set the Options, which are under a drop down menu to the upper right of the usage graph while in the "Usage" tab, to "Incoming & Outgoing" and "External".  I'll post a pic so you know where the settings are.  The program is advertised as a "Firewall" program, but it doesn't install it's own.  It just gives more precise access to the one already built into Windows.  It doesn't change anything with the Firewall unless you actively do so, so don't worry about it changing any of your Firewall settings.  https://www.glasswire.com/ 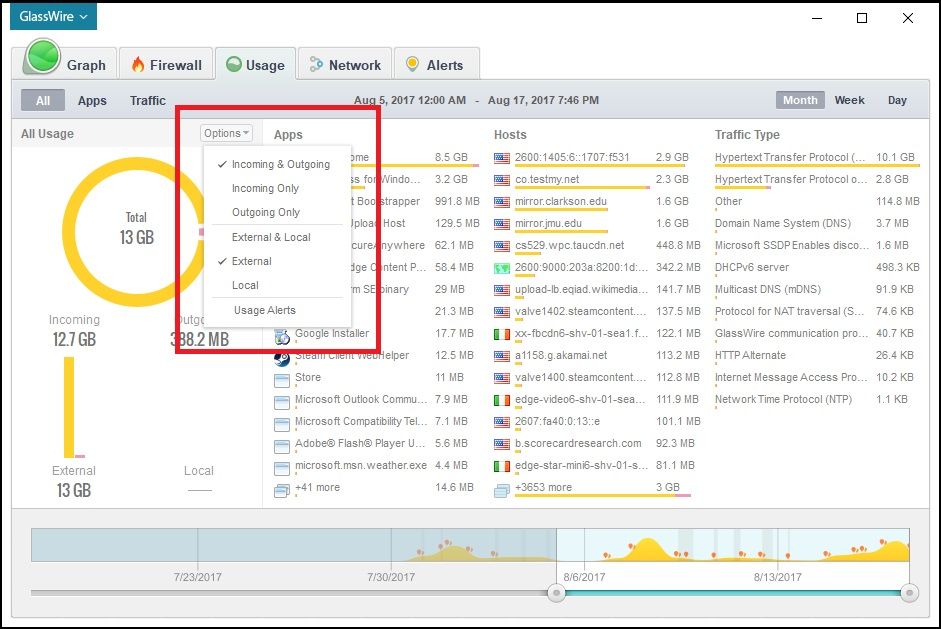 Back to the phones.  I know that Apple products have a built in app called the Activity Monitor, and that has a Network tab on it, but that only monitors the data since the phone has been turned on, and wipes out the data when it's turned off.  This is what I'm told.

I've also heard, from a few people now, that Apple products are in constant contact with their servers, using a lot of data, so the only thing I can think of is to set the updates to manual, if you can, and to NOT use the iCloud.  I don't know how, but you should turn the iCloud off.

One last thing.  If you have a DirecTV receiver connected to the HughesNet service, you should disconnect it.  Those receivers can use a LOT of data, even when you aren't actively watching something On Demand, and even when they are turned off.

I hope this helps.