Would Any of the Corporate Ladies Be Willing to Help w/ Dismal Speeds?

Would Any of the Corporate Ladies Be Willing to Help w/ Dismal Speeds?

It's started again.  I was doing great from the end of Jan till a few weeks ago.  I waited to see if the speed issue would work it's self out.  It has not and is only getting worse (2Mbps at 12:30am

).  I've been on the phone with ts three times in three days.  Here is my last case #111494783.  Tech support wasn't able, during any of the three calls, to test my download speeds.  Here are my download speeds from testmy.net (system too slow to even complete an upload test).

I have waited for the system to fix it's self.  I've sent emails to the person who emailed me back in Jan to let me know the problem had been fixed and they were issuing credits to my account for three months and I've tried to work it out with tech support.  I'll try here and then I'll call corporate for help. 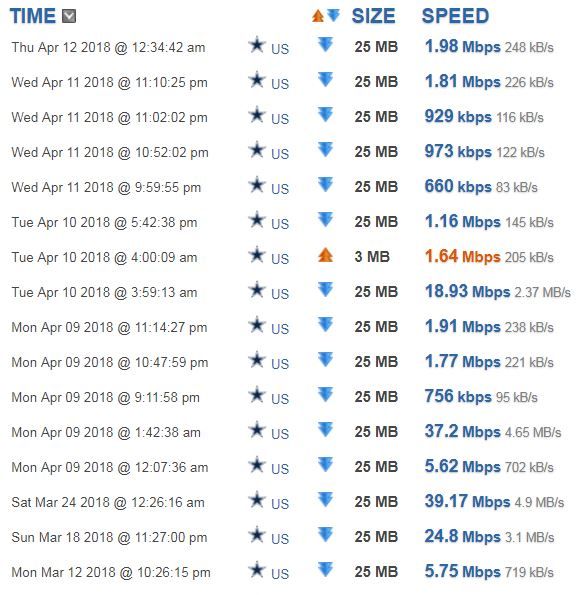 Download and surfing speeds have not been good for a few weeks.  I've waited to see if things would correct themselves as they have in the past.  At midnight my d/l speed was 5.6Mbps.  Then the system went down all together.  Called and was told they were upgrading the software.  During the call, I was connected again but support gave me a case #(1113281315) anyway.  Tonight, more slow speeds.  Took an hour to be able to do a test.  It was 756kbps.  Called tech support after rebooting and bypassing the router for the speed test.  I was told my problem is the weather in Duluth, MN (my gateway).  While on the line, I looked up the weather in Duluth...33 and clear.  So that's a lie.  Next, according to ts, my problem was my Netgear router and that the radios were off on the HN modem/router (sigh).   I could see where this was going (again) so I asked to speak with a supervisor and actually got one!  He went with MY current weather...mostly cloudy.  Now I've been doing this long enough to know that non storm clouds don't cause a "dead in the water" connection.  How did they get my weather right but not my gateway's weather?  Then he said it was all the devices I have connected to my router.  With the exception of the computer (phones are on mobile data), they are all smart plugs or a smart light bulb and Google Home devices that are idle AND WORK PERFECTLY WHEN MY SPEEDS ARE WHERE THEY SHOULD BE.   It's you HN, not us!  The system is so degraded by "mostly cloudy" that he can't even get a speed test reading?  I finally got a couple tests to download.  They were 1.8 and 1.9Mbps.  I guess my weather has been "mostly cloudy" for several weeks?

When ts said my case would be escalated and I'd get a call back in 2-3 days, I told him I've never had a call back and most of the people in the community haven't either.  Then I corrected myself and said yes I did get a call back...3 months later and AFTER service became good again

He said that if weather conditions are poor at the time a call back is promised, then upper tech support will kick out the request for call back.  So that's the reason we don't get a call back...hummm.

I've now written two nice but firm letters to whoever sent me an email back in Jan letting me know that they were opening up areas of the satellite to help with the overcrowding issue and issued a $20 credit per month for 3 months.  I've let them know that things are bad once again.   I wish they'd put a "she's not going away" remark in my account so we could just bypass all these excuses!  I'm getting too old for this

Just got off with ts was told we have no data because the amazon echo is using so much of it everyday. He gave me 3 gb and is calling me back tomorrow at 5pm to see what is using it up. We had Wildblue years back and canceled a year into our contract for $250. Seriously thinking about doing it again. We can't watch any videos because they are so slow and wont load. Pay for 30gb package because the 20gb wasn't enough. I am tired of the same excuses and getting ripped off! Our cell phone package is unlimited because we can't have two phones and an ipad on our wifi because it eats all the data uo within 19 days or sooner. Same excuses different day. Sick of being ripped off! Let's see if he calls back tomorrow at 5pm and what has eaten the 3 gb he gave us. GRRRRRRRRRR! Sorry for the rant!

I didn't expect anything when I called tech support.  I just do my best to keep my cool because I know how it's going to go.   But, there is a "chain of command" to follow.  I've followed up via email and now phone tech support.  I haven't checked the weather in Duluth but here it's clear and my download speed, couple hours ago, was 1.6Mbps.  I WON'T give up.  They just need put that at the top of my account (g)

I have 8 home assistants (7 are plugged in full time).  Two Alexa Dots and 5 Google Homes and Minis.  Five smart plugs, one smart light bulb and a wifi thermostat.  I did a test several weeks ago and posted the findings here.  I had just bought a Google Chromecast and wanted to see what the data usage was.  Anyway, this is one of the results with all the smart devices plugged in.  You can see the times.  Everything was idle (no one using any devices).  As you can see, for all the devices I have, it's a mere drop (if that much) in the data bucket!

Also, I've recently discovered a program called Free Download Manager.  It schedules YT downloads (and other sites) for any time you choose.  So I load it up with downloads for the "free" hours to watch whenever I want.  I've never used more than 4 or 5% of my bonus hour data.  This month I have 42% left with 6 days.  No more having to put up with watching video at 240p

How are you being ripped off by HughesNet when it's your devices that are burning through your data?

Regarding the videos, have you tried turning off the Video Data Saver?

Thanks for posting.  After running and reviewing your site diagnostics, we have decided as a courtesy to dispatch a technician to do a complete review of your site due to the concerns you've been encountering. Your dispatch is currently scheduled for our earliest available slot: Friday, Apr 13, 2018 between 08:00 AM-11:00 AM. Call us at 866.347.3292 and reference case #111516615 if you need to reschedule. Please let us know how the site visit goes.

Thank you so much Liz.  I just completed another speed test on testmy (at 11 am).  3Mbsp download.  The phone techs kept trying to get me to complete an upload test but I can't get one to complete with speeds that slow.  Even on a good day it's not more than about 1.5Mbps.  Yes, I will post here how the tech visit goes.  Again, thanks!

Liz, a couple of hours before the technician was due to arrive, I did a speed test (around 8:30).  First 42 and then 23Mpbs.  I didn't think to ask him to also do a speed test before any adjustments.  He couldn't find anything wrong but did a slight realignment on the dish.  He pointed out a couple of tree branches that could be causing a problem if it was really windy.  It hasn't been really windy for a few weeks but will see if I can talk DH into cutting them down.  He might have reported getting my signal strength up to 105.  He's not been honest with that in the past and I haven't seen it that high since he's been here.  I HAVE seen it that high during the ultra-slow times tho...that's always confusing.   Since he left, download speeds and surfing has been back in the "awesome" range!!!  If my dish was out of alignment, wouldn't my signal strength be low all the time?  And would I ever have a high download speed with an out of adjustment dish?   I'm just glad to have things working right again.  Google Homes responding in 3 seconds vs 10 or not at all, no GPM buffering, .  I can actually watch a YT video if I don't want to wait and schedule a download during bonus hours (and sometimes I'd wake up to find those timed out).  So whatever you guys did, THANK YOU THANK YOU!!!  Keeping fingers crossed we can keep it up