I switched Gen 5 in December.  Since that time I cannot access the Yahoo home page through any browser.  It shows "yahoo took to long to resond" and "time_out_err"  After the first tech support wasted hours, I took my PC to the shop.  They cleaned it up and accessed Yahoo via Chrome browser through their internet provider on my computer with no problems.  I bring my computer home and the Yahoo problems continued ( the first call to tech support was was in January.)  Since that time and 20+ hours on the phone they sent a tech out.  He could not fix the problem (he also called tech support) He stated he had never seen a problem like it.  They even replaced the new modem.  After that visit, I called Hughesnet again and asked to go back to my old plan.  They said no even though they could not fix the problem.  Now they are telling me to contact Yahoo. I explained that the Yahoo page stated Yahoo did not have a customer support phone number and I asked if they could initiate a three way call if they had a contact number, they could not do so.  I have sent an email to Yahoo but I am unsure if they will reply.  Meanwhile I can log into my Yahoo email with Edge.  I still  cannot access the Yahoo home page through any browser.  It does not make sense that it is a Yahoo problem if the repair shop can access Yahoo on my computer through their browser.  CAN ANYONE HELP ME

This is definitely an odd thing.  Not that this is a permanent fix, but have you tried changing your computer network adapter's DNS settings to something other than HughesNet (obtaining the address automatically)?  A popular alternate DNS server is Google's, which a lot of people use, though primarily for better speed.

The following page explains how to change your adapter's DNS settings...  https://www.windowscentral.com/how-change-your-pcs-dns-settings-windows-10

Please let us know if this makes any difference.

Just checking in with you to see if this is still happening. Have you tried the steps GabeU provided?

There was also an update to your beam last night that is not directly related to your problem, but may have indirectly improved it. Let us know if it is still going on so that we can move forward on your issue.

Thanks Gabe, I tried, but it did not work. I am taking my PC back into the shop and if yahoo works on their provider it has to be a Hughesnet issue, right?

I tried his solution but it did not work for me.  I am taking my PC back to the shop. If Yahoo works with their provider,( not Hughesnet) it would seem to demonstrate that it is a Hughesnet iss rather than a Yahoo issue.

Sorry the DNS server change didn't work.  I've seen websites have issues with HughesNet before, but when it does happen it's usually a specific company website that gets tripped up by security, like a bank website or something similar, and it usually affects a number of people.  I've not heard of it happening with such a widely used website, and where more people aren't reporting it, or at least not that I've seen on any of the tech sites.

I willl say, though, that it not working after replacing the modem would make one think that it's the computer itself, but with the website able to be accessed on the same computer while connected to a different ISP suggests that it isn't the computer.  It's a head scratcher, no doubt.

Whatever the case, I'm sure Amanda will help you.  She has access to the engineers, too, so someone should be able to figure out what's going on.

In the meantime, one other thing you could try is flushing the DNS cache.  I don't know that this will help, but with it only taking a few seconds to do it might be worth a try.  To do so, bring up your Command Prompt (under Windows System in your Start menu) and type "ipconfig /flushdns", without the quotes and with a space between the g and / .  Then hit enter.  This will flush the DNS entries stored in your computer.  If successful, it should look similar to what's in the picture below.  It might trigger the site to work, but to be honest, I doubt it. 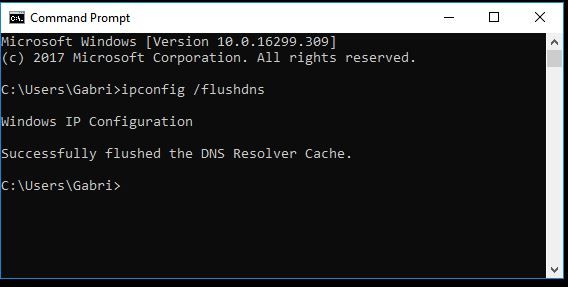 You didn't mention if you do or not, but do you have another device that you use with HughesNet, like a phone or tablet, that you might be able to try with?

I'm going to try clearing out the cache from your modem and see if that does the trick. If not I will go ahead and consult with an engineer today.

Exact same problem here for several months. I also have smart phones and tablets that will not connect to Yahoo through Hughesnet. Very frustrating!!