receiving less than 17 percent of my contracted speed

Can you tell me what is the difference in the technology deployed in the Gen5 satellite that makes it more efficient? Also, do you know if it too will be susceptible to over booking in time? 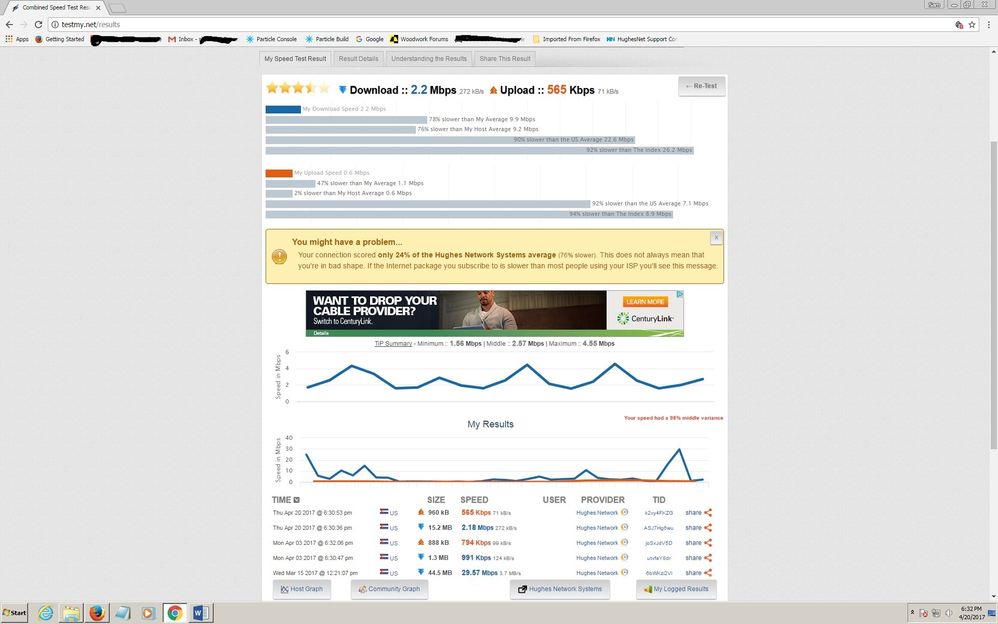 Be easier to have a url to an account instead of having to look for the TID and figure out the compID used on the testing, and please note, downloads require the 12MB manual download test.


That aside, while looking at the TID results, thats a plain old sign of not throttling, but of congestion.

This is what light congestion looks like on a second by second metric. 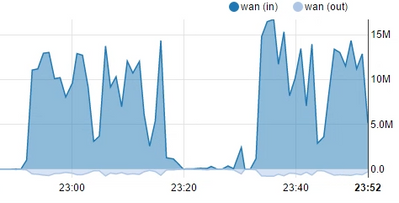 Note that there are sharp spikes and valleys as the system is trying to deliver as much bandwidth as it can for the beam assignment. 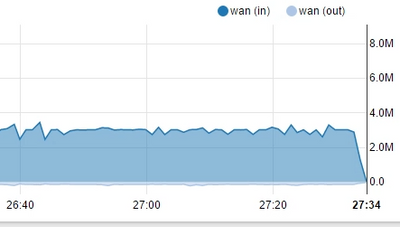 Notice, the throttled connection is much slower, but has a much more smooth and consistent speed.

Looks a lot like the unthrottled congested speed earlier, doesn't it?

Yup, looks like a congested beam (at least at this time)

As I tried to say before, you won't find satellite Internet to be the functional equivalent of ground based systems. Different animal altogether.

Will ES19 likely ever be 'overbooked'? Sure, at least on some beams. It likely will be a long time as ES19 has at least double the capacity of ES17.

What you call 'greed' in terms of overbooking is really a sound business practice in some eyes.

The user population is not evenly distributed nor do users follow a strict pattern in their usage pattern. You simply can not afford to build-out a system to 125% of capacity.

I haven't heard any numbers on the cost of ES19. It is said that ES17 was in the area of $500 million plus launch and insurance costs.

Some sources put ViaSat-2 at about $625 million and $107 million more for launch.

Those costs plus that of Gateway improvements must be recouped within the expected lifespan of the bird, usually about 15 years.

Your choices at this point:

>Move to ES19 which will take years to heavy load<

Not only is it congested now but based on my experience, as explained to all of you ad nauseam, it appears to be at this status the majority of time. As a consumer I'm extremely frustrated because I pay for the best plan available yet at no fault of my own my speed is being stifled to a level that essentially takes away capability. In my way of thinking, deliberate throttling or throttling by proxy (over selling the capacity of the beam) has an identical affect to the end user. Consequently, I'm being over charged for Hughsnet's calculus. Put another way some consumers on different beams have no issues while at the other end of the spectrum we're called trolls for complaining and told if we don't like the service to go elsewhere. This surely explains why some on this forum ride in on their white horses and adamantly defend Hugesnet because they don't understand how the different beams are populated. Plus the culture here is adversarial when folks are persistent about their issues. As such, forum members pick up on this and assimilate to the norm. In their eyes it must be some dumb a.s.s who can't figure it out. Making matters worse some Hugesnet personnel use the ignorance of those complaining to their advantage. Rather than admit that some beams are significantly oversold and inform consumers of the pitfalls they go out of their way to put the blame on the customer by faulting router setting, or inadequate data plans, or data leakage. This forum is very good at doing that. It comes across most of the time like the moderators sole purpose here is to protect Hugesnet improprieties by playing a con game of hide the real reason for your speed reduction. The speed tests become leverage against the consumer instead of assisting with troubleshooting. I don't know how many times I heard "your speed tests are fine the problem has to be on your end - sorry there's nothing more we can do." Well here's a novel thought how about a break-off point of subscribers when a beam saturates to a level where service will significantly degrade.

What you call blame, we call cause.

No one here has called you or anyone else a 'troll'

No one refer to you as 'some dumb a.s.s'

We here in the Community have tried to engage you in troubleshooting efforts only to be rejected or rebuffed. I have news for you my friend ... no one 'knows it all', anyone can miss something ... and this includes the lower teir support folks. Many of those are early in their work life and may not have the same life experiences as some of us regulars.

Every line of investigation that I have offered up has been rejected by you ... every single one.

You do have some options ... I guess ranting is one of them.

Dropping the service is yet another.

You believe you are being 'throttled' and you can't or won't get or go beyond that.

You need to make a choice ... or no choice at all.

Good Day to you Sir!

No one here has called you or anyone else a 'troll'

I actually kinda did earlier, on another thread, one of the many he jumped into.

Well Yoda let’s review the brilliance you offered to what I believe to be a Hugesnet’s problem – overbooking:

If you’re from the era I think you’re from and prior military like myself then you’ll recognize my response “nuts”.

I'm a loyal paying customer that was not only promised the ability to Stream in SD but the advertisement is still listed on Hugesnet website. Based on the speed test I submitted, and the resulting analysis, I think it's quite clear that the beam is overbooked. The overbooking is not a recent phenomenon either, it’s been this way since I subscribed. Further, contrary to all the wisdom I received here on the forum, the ability to receive even 17 % of my speed allotment doesn't look promising. I did inquire about ES19 as a possible solution, and to add insult to injury they want to charge me a $99 dollar installation fee and force a 24 month commitment - which by the way increases from $99 dollars a month to $140.00 dollars or so (with taxes) after 12 months.  Gee, I've been screwed for over 12 months now, essentially handing in over 25G a month of my primary data plan because of the snail like speeds and Hugesnet offers me a fix that charges me even more. What a solution Yoda!

One last comment for this post. You keep telling me that this isn’t a land-based system so don’t expect land-based results. Believe me I understand that. If I expected land-based speeds then I would expect at least 80 percent of my contracted speed. As I’ve specified over-and-over again, I would be satisfied with a reliable 2 Mbps (17 percent) of what I pay for.  Is this unreasonable? Interestingly, when I looked at the graph provided above reflecting throttled speed, the line indicated a smooth 3M speed.  If this graph is from Hugesnet why can’t I get a measly 2Mbps consistently?  I’m assuming the answer is because the beam is so overbooked that Hugesnet realizes it doesn’t have enough space in its time slots to accommodate a satisfactory level of speed.

Yoda working with satellites in the military you know how TDM works. We used the technology to consolidate multiple conversations that could be beamed to another tower. I’m sure you also remember at times when those conversations became garbled when we attempted to force more conversations into available time slots because the queues would become congested.  I assume this situation is similar – too much data not enough time slots.

shoot a PM to Amanda or Liz, see if there's anything she can do for you on the price of the GEN 5 upgrade.  Concessions should be made, if this was an issue you've been dealing with for a while

conversing with anyone else on here is a complete waste of time, believe me.

Thanks for posting. This community is for the purpose of our most knowledgeable HughesNet subscribers to help other HughesNet subscribers like yourself. They are an invaluable resource to the community that can help guide those with common issues using tried and true troubleshooting methods. We highly suggest researching for the information you seek and working with the community first. Should a case get to the point where a mod is needed for escalation, we may be pinged or jump in on our own.