I am needing to know on the BUY TOKENS SCREEN... at the very bottom I see

Are those tokens free or did I just buy 3 tokens and not know it? 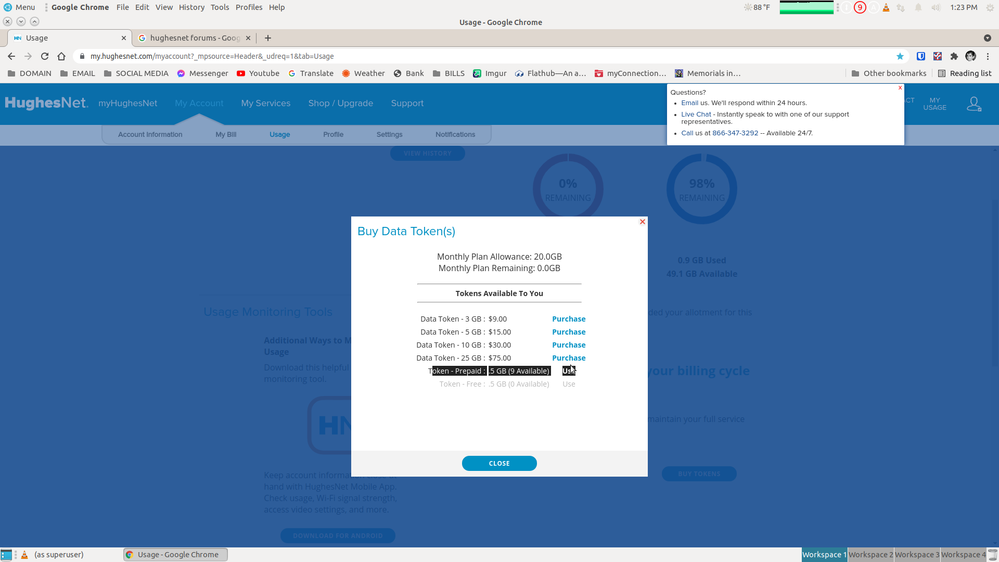 Those are free -- EDIT: maybe you were given tokens by the mods at some point?  The mods can tell you for sure if it's something that came from them or if you indeed bought tokens.

I had a token left over from when I bought a token a LONGGGGGG time ago and the token had 4.8 gigs left before I ran out of my 20 gigs and today I only had 3.0 gigs left of my token.

I just so happen to log into my acct today with the mindset of buying 1 token to get me to the end of my billing cycle  ( 6 days left it says) and I just happened to  notice that at the bottom of my screen.

I ran out of my 20 gigs early because I upgraded my OS (Ubuntu) to the next release.

Those system updates sure do eat broadband...

In any case, you can add those tokens to your system by clicking on "Use."

Yes they do eat up a lot of data.

( skipping 1 release because it was no longer supported or other wise I would of had to upgrade through 3 versions.

But yes I would like to know where these free tokens came from Lol.

Sadly, I do understand it.

Oh yeah? Are you a fellow Linux user? 😎😎 If so what Distro and DE? Or are you meaning that from a  Windows standpoint?

I haven't used Windows since Windows 7. I did try 10 for a little while before going full time Linux 2018 (I was still back and forth reformatting one for the other but finally went full linux and haven't looked back

Sadly, I do understand it.

I still use Windows, but I have one laptop with Linux Mint.

They're assuredly tokens that were given by the reps for some reason, whether in anticipation of some testing that was going to be done or even as compensation for an outage or other issue, including something widespread that affected a lot of people.

Two or three years ago there were two widespread, short lived outages for which they compensated people with 3GB of token data for each one.  One was in the evening on January 1st (2019 maybe?) and the other was either a few months prior to that or after it.  You weren't a customer at that time, but I'm just using those two things as examples of what they sometimes give data tokens for.

It's also possible that there was some type of glitch in the system that has been giving you one each month.  The old daily refill legacy plans would get one free token per month, and the system could just have mistakenly given you the same.