I have 2 questions.  I have had Hughes Net for MANY years.  In all of those years, I only ran out of data ONCE and that was years ago when my daughter was visiting and tried to watch a 30 minute episode of The Office.  I work from home and use my computer mainly for work.  Last month I ran out of my PLAN data and this month I am almost out (I have 6% left with 8 days in the billing cycle).   I normally have at least half, usually more, of my PLAN data left and normally have 80% or more of my BONUS data left over each month.

So my first question is how do I find out why I am using all of my data all of a sudden.

My second question - I have some tokens available to use.  I used 4 of them yesterday.  While I see they deducted them from the balance of my tokens (from 9 tokens down to 5), I do not see that using them increased my actual data balance.  Do the tokens not take affect until my data usage reaches ZERO?

For reference, you can change the day you're looking at on Glasswire by clicking on the little "Day" dropdown on the upper right.  After you've used it for a while you can also look at an entire week or month, and anything in between with the "Custom" setting.

Why it would all of a sudden use more data than it used to I don't know.  I'm not at all familiar with Sync and have never had it installed on my system, so I don't know exactly what it syncs to or if there are options to limit it to a specific time or action.  All I can tell is that it was using quite a bit of data.  If the 26th is any indication of a typical day, that's upwards of 3GB or more per month of data usage just from Sync.

I'd be sure to install AdBlock Plus, unless there's a reason you need to be able to see ads on web pages for work or something.  Ads use a lot of data, and more and more over time, as the ads become more graphics and bandwidth intensive as time goes on.  Some ads today are even like mini streaming episodes, eating up data as they play.  Some even continue to play as long as the web page is open, changing to a new ad after the old one has finished.

I actually have Webroot on my Windows desktop and laptop, and on my folks' laptop.  It's a great AV.  One of the lowest in data usage, which is why I chose it.  I would definitely install Malwarebytes.  It won't interfere with Webroot, and it can catch things that Webroot may not.  And other than the initial download and installation, and then occasional definition updates, Webroot doesn't use any data.  The definition updates aren't very big either.

Other than Chrome and Sync, nothing else looks to be using an unusual amount of data.  Even OneDrive is using only a small amount.

I am going to be downloading the ad blocker and the malware after I get off this evening or first thing in the morning.  I just looked at the Glasswire again and it looks excessively high.  Can you tell me about what is a reasonable number it should be at?  I did uninstall SYNC first thing this morning, but it is still there.  I am attaching the screen shot of the Glasswire that I just took.  If you see anything, can you let me know?  Again -Thanks so much ! 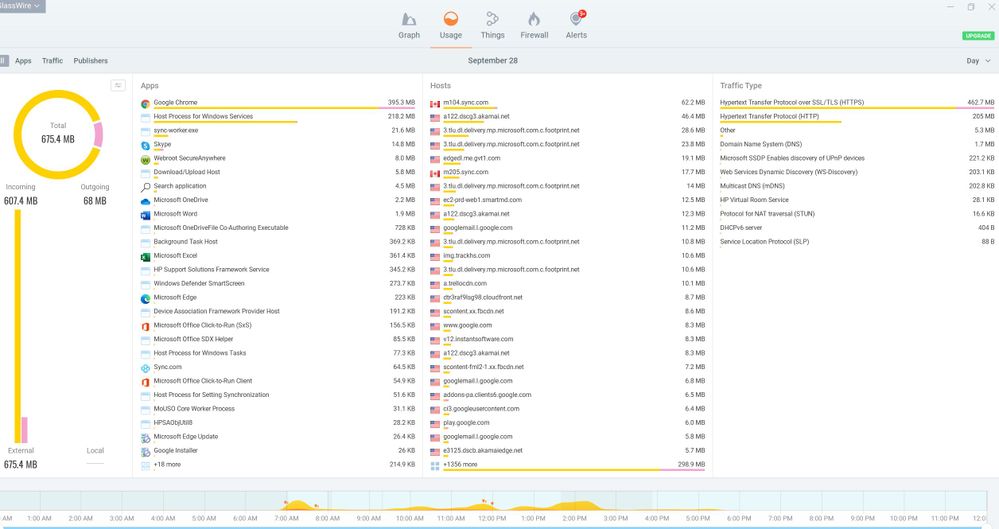 I can't really say what a reasonable amount of data usage is as everyone's usage habits are different.  It's clear that Chrome is using the bulk of the data, however.  The ad blocker will likely help with that.

I have downloaded both the ad blocker and the malware.  Do you think perhaps using Firefox as a browser would be better than Chrome?

That's really a matter of preference.  There's nothing wrong with Firefox per se, and a lot of people use it.  I don't care for it personally, but it's only because I'm used to Chromium based browsers.  I'm sure if I had to use it I would get used to it and probably end up liking it.

I use Microsoft Edge.  It's Chromium based, and somewhat similar to Chrome itself, but it's less resource hungry.

Hopefully you no longer see Sync in Glasswire.  The ad blocker should help as well.  Don't forget to uncheck "Allow Acceptable Ads" in its options.

Thanks for the information.  I am not a fan of Firefox either, I prefer Chrome.

I do notice that I am having some issues with my computer since downloading the ad blocker and malwarebytes.  it is EXTREMELY slow and sluggish in eveyr program.  One of the programs I have to use for work is not working at all.  I am going to uninstall both of them and see what happens and then reinstall 1 at a time and test to see which one is possibly causing the problems. 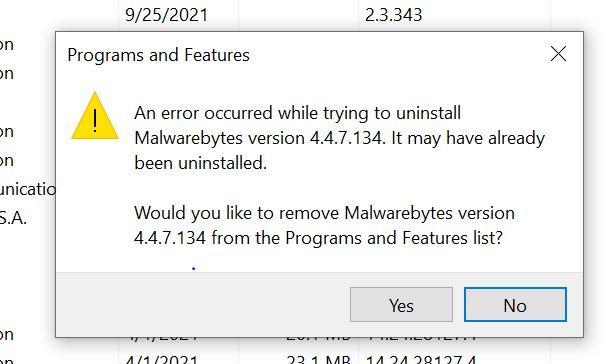 If the Malwarebytes is still installed and running, right click its icon in the taskbar and close the program.  Then try uninstalling it via Programs and Features.

It's interesting that your system would slow like that.  I've never seen that before.  I wonder if there is some other program on it that is not getting along with Malwarebytes.

The ad blocker wouldn't be the cause of any slowdown.

Took of the ad blocker and it did not help.  I still cannot get the Malware to uninstall. I closed it in the task bar, in the Task Manager, and even deleted the shortcut on my desktop and I am still getting the same error message as above when I try to uninstall from Program & Features.  I wonder if it did not install properly and that is causing the problem?  Any idea how I can get this off my computer?

I have no clue.  I've never seen this problem before.

See if the following will help.  Just make sure to choose "No" when you reach step #11.

So when I click on "YES" to the error message above, I get the following error.  I AM logged in as an administrator as far as I can tell.

Did you try the instructions I linked to?

You also may want to take a look on the following page.  There may be some helpful info there.

I have not yet - I wanted you to see what I posted above before.  I will try your link now.  How bizarre !!

Used the link you gave me and I was finally able to uninstall Malwarebytes - everything is running fine now.  The 2 programs I was unable to use previously are running like a top.

That's good.  Glad to hear it.

I still have the Glasswire installed and am watching it.  I really appreciate all your help, so thank you very much !

I still have the Glasswire installed and am watching it.  I really appreciate all your help, so thank you very much !

My data started over on Friday, 10/1.  I have had my computer on about 2 hours each day.  Today, 10/3/2021, at 2:57 PM, it says I am already down to 87% of my data left for the month.  I do not watch videos, I do not play games.  I was told by somebody in the Executive Customer Care Department that there was a huge download on my computer on 08/06/2021. I have no idea what this is.  Glasswire has not been really helpful.  Ad blocker and malware also not helpful.  I was told by my contact in ECC to call tech support and ask them to check.  I am on the phone with them now and the language barrier is a huge problem.

Does anybody have any idea what I can do to find out what is eating up my data?  I have had HughesNet for many years and have never run out of data until the last 2 months.  It is just me and my husband at home, no kids, and nothing has changed in the last couple of months.  I actually use my computer less now because I semi-retired in April and only work PT now (which I use my computer for).

Would you recommend that I take it to a shop?  My computer is just a year old.

Did you uninstall AdBlock Plus?  I hope not.

Glasswire's only going to tell you how much data your computer is using, and what's using it, but it can't monitor the data other devices on your network use.

I did uninstall it, but put it back on.  I did NOT put malware back on because that was the culprit of 2 of my programs that I have to use for work.  I just checked my data usage at 8:25.  In 25 minutes, it had used 1 GB of data.  Something definitely is wrong.  I called tech support yesterday, but that was worthless.  Just spent an hour of the phone for the girl to tell me how much data I had left for the month, then was on hold about 35 minutes and I finally just hung up.

What would you recommend?  I need to get this taken care of.

You probably need to work with one of the HughesNet reps on this site (@Liz , @Remy)  since they have access to diagnostic tools that may help figure out what's going on. They can also suggest further troubleshooting.  The usage comes from something in your network, very likely, so you need to identify what it is, and the reps may have some suggestions for you on how to go about that.