Ok, tech folks at Hughesnet - here’s an odd one. It’s two problems that may be related. I’ve got 40 years of satellite background and 30 years internet experience, but no spectrum analyzer or test equipment anymore - retired - but maybe you can sort it out.

I’ve had Hughesnet for a year or so. It works well most of the time. But - here’s where it gets odd.

My kid is enrolled in online school due to the covid this year. Things were fine until last October. Out of the blue, her HP chromebook was dumped off the wifi and has never been able to log back in on the 2ghz feed. It tries and delivers an error message that the wifi signal is too weak. Switched to the 5ghz wifi channel and - no problem. Well, I needed to replace it anyway so, I did. It worked fine - for about 24 hours. Then - exactly the same problem happened again and remains a problem. She’s ok on the 5ghz wifi - I just switched the wireless printer to the 5gig signal so she can print as required. Our other devices (the printer, an old HP desktop, two smartphones of different brands) work fine on the 2ghz wifi.

My guess is that google updated the chrome operating system / drivers in October, since both the old machine and brand new one failed identically. (The new one probably updated after taking it out of the box and turning it on. Google does that without saying anything about it.). That update probably has a bug. Second guess is that Hughesnet updated something in the satellite IDU modem. I’ve looked in the admin config and it won’t let me change the wifi channel anymore - if it ever did. Google specifically lists a couple of channels to avoid / channel 6 specifically. I can’t tell what channel the Hughesnet wifi is on - it just says “automatic” under channel selection. That would explain the “low signal” (it isn’t low) - if there’s some issue with chrome on some channels. (It actually presents like interference - I’ve seen people place a 2.4ghz cordless phone on top of or next to a wifi modem and suddenly get similar errors on Mac product.)

The other is totally random day and night Hughesnet wifi resets that shut down the wifi entirely - both 2 and 5 ghz channels / for a minute. It then comes back up. It seems to be something Hughesnet can “see” remotely / I have posted about this once before and “Liz” at Hughesnet sent a new IDU / modem without my even asking. But - if didn’t solve the issue.

SOOOO - I suspect these two problems - the chromebooks not being able to use the 2g wifi at all and the Hughesnet resets - are related. I’m guessing it has to do with the chrome / google issues with channel 6 on the 2g service. But without test gear I’m stuck.

Can Hughesnet change the 2G wifi frequency to some other channel - if it’s on 6 or 11, maybe to the furthest channel away?

I’ve got Hughesnet telephone service so you have my number. You can also email.

You can change the 2.4GHz WiFi channel here... 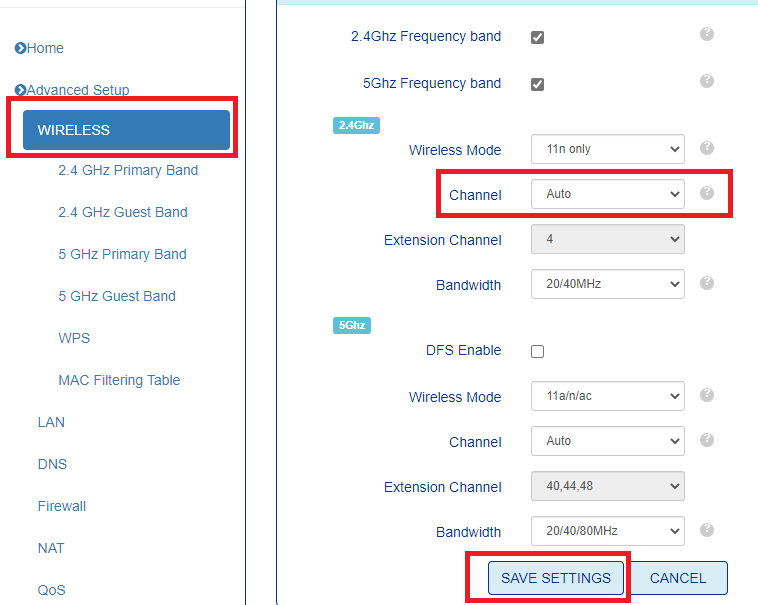 OK - I got down into that setup section - which somehow I’d missed before - and tried every channel and bandwidth setting to no avail. Thanks for that suggestion - I don’t know how I missed that - probably because I’m using a tiny old iPhone 6SE with postage stamp screen. But ... the chromebooks will not find the 2g network - same weird error. (Yet I am on it now with this device 10’ further away than the chromes.) so much for the known channel 6 chrome problem. Ugh! So odd.

My first guess would be some kind of signal interference, and that maybe the Chromebooks' WiFi reception isn't as strong as the other devices, so they're being more negatively affected.  Again, that's just a guess.  It could be due to drivers, like you mentioned.  I'm not versed enough in WiFi to really know or give some other ideas or testing protocols.

Hopefully you'll hear from Liz or one of the other reps before the day's out, though it might not being until Monday before that happens.  Still, there are other knowledgeable people on here that may have some ideas.  Hopefully @MarkJFine sees this and can provide some (not to put you on the spot, Mark).

It acts like interference but the closest wifi is 0.5 miles away and not line of sight. My cordless telephone is 5ghz and I’ve shut it off, moved it 20’ away, etc. The issue almost has to be in chrome - the first one worked a year here and then just stopped, when replaced with a new one, it worked 24 hours or so and then developed the same issue (probably when google updated the store / factory software after it ran a day.)

Thanks for your help! At least I finally dove deep enough in administrative setup to find the channel select menu/buttons!

So it may very well be that it is, in fact, a problem of the Chromebook itself.

I just read about a possible problem with Bluetooth interferene with the 2.4GHz WiFi with Chromebooks.  Just as a test, I'd try turning it off to see if it makes any difference.

Google updates everything in the background - they did something that blows up the handshake. I can “see” the SSID for the 2.4ghz but when you try to join you get that out of range fail error.

Either Hughesnet or google’s “Yoo-hoo” protocol is “non-standard.

My firmware seems to be 2018 vintage on this Hughes modem... google updated the chromes in October and - here we are.

It’s only a minor headache - but since so many kids are using chrome books now it really needs attention.
0 Kudos

I install Hughesnet.. I see it a lot on the chromebooks.. Only the 5g works on most.. I have no idea what causes it.. But I think it is on the schools end..