Is there any maintenance or anything like that going on with my Gateway (ES19, Roseburg OR(9)) or Beam (051) as of recent?   My late night speeds over the last couple of nights have plummeted, and during a time when they should be going up, not down.  Normally my speeds late at night are in the 30Mbps and 40Mbps range, and right now they're not even hitting 2Mbps, with one hitting only 572Kbps.  Earlier this evening a test around 9PM EST showed a speed of a test showed 27.54Mbps, which is about normal for me for that time of night.

I don't have a whole lot of tests in at this point for this issue, but you can already see how bad they are compared to what they normally are.  On early Saturday morning (3:00AM EST) I downloaded a 2.6GB Ubuntu file, and the speed was great.  Less than 48 hours later it's this.  🙁

I'll try to get a few more tests in tonight and then some during the day tomorrow.

I'll leave my modem plugged in so that you can look at my system if you need to.  I also ran a couple of tests at HughesNet, which matched what I'm seeing on testmy.net.

P.S.  Though I don't know that this has anything to do with it, I did have a modem software upgrade occur on Friday, though the Ubuntu ISO download happened AFTER that software update, about ten or eleven hours later, and the speed during that download was normal.

Edit:  I forgot to mention that the tests have been run with a LAN cable connected desktop computer and with the WiFi in the modem disabled.

The speed has come back up a bit, but nowhere near where it normally is, nor should be at 4:21AM EST.

I've decided to download the Windows 10 20H2 ISO and just let it download while I sleep.  It's going, but slowly.  Normally it would finish in about 12 or 13 minutes.  It looks like this is going to take one or two hours, if it continues at this better speed.  If it goes back down to what it was, and with it being choppy like it was, it would probably take at least 12 hours or more.  I'm going to set my alarm to check it out in a couple of hours.  Hopefully it will be done so I can shut my system down, but again I'll leave the modem plugged in.

For reference, it's still okay for general browsing and such, though I did give up on a Youtube video earlier (just testing it).

Well, after a significant amount of time the download got to about 90% and then pretty much just stopped.  The speed had dropped too low for it to continue.

I then power cycled my modem and tried again, and it started very slow, then picked up speed a bit.  It seemed be going okay, though still slower than normal, and when it reached 72.9%, it hit a wall.  Again, the speed dropped so low and became so choppy that it just stopped.  More wasted Bonus data.  🙁

Microsoft's servers have always been really sensitive to both congestion and low speed, at least for me, but this is very unusual for this time of night.

I have run a couple of tests this afternoon and the speeds are great, but this is during the day.  We'll see what tonight brings.

I hope the mystery will be solved soon. 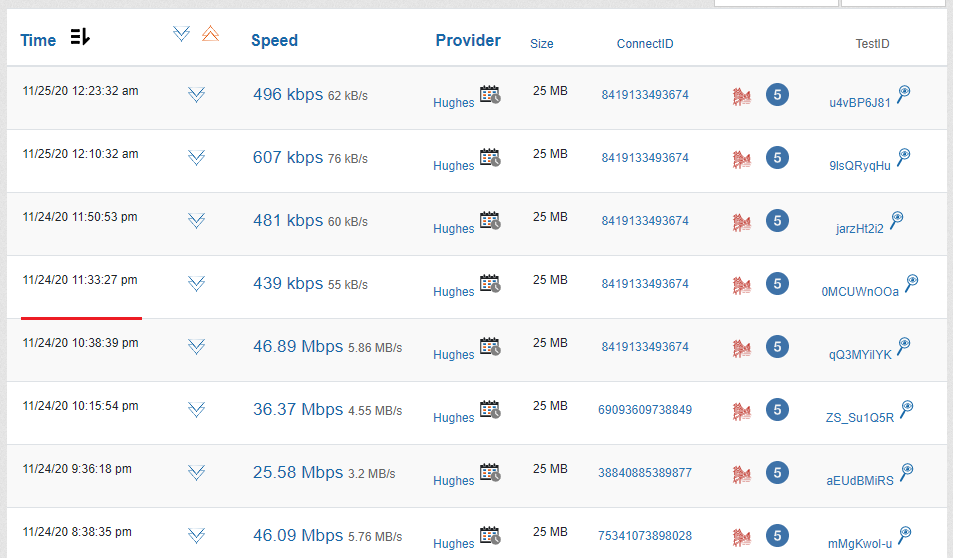 That's not congestion.  It's like a switch, though I didn't catch it at the exact time it changed.

Looks to me like the acceleration process stopped at the gateway.

What could cause this to happen over multiple evenings within the same timeframe?

Looks to me like the acceleration process stopped at the gateway.

Processes die for all sorts of reasons. Bugs... low memory... inability to handle the load... timing issues... Could be anything. If this is the case, there really should be a daemon that automatically restarts the process, which if the case apparently didn't happen.

Get thee behind me, daemon! 😁

Thanks for the explanation, Mark. Hopefully they will figure out how to stop this from happening every evening. (Fire the old daemon, get a new one).