Curious, have you tried disabling the "Enable Quality of Service High Packet Priority" option in your Discord Voice and Video settings? Does that make a difference? I was just testing this out on our HughesNet system here (albeit on Gen 5) and we weren't able to reproduce those high latency spikes you're seeing. When we started talking at length, the latency would go up to around 2000ms, but that's about as high as it went.

Yes, I have tried so many things it's just mind boggling how this happened over night, a while back ago now... Back in October before  we had the latency issues, even speaking at lengths at a time our latency never got above 740ms..  Sounds like you guys are having some issues too if you are reaching 2000ms by speaking at lengths.  As mentioned before on previous post, on a laggy day at peak times rarely did it ever go above 740ms.  Are you guys actually able to communicate with no loss of audio, cutting in and out at that 2000ms?

It's the only reason I am here as I'm not used to seeing this behavior. I never even got a spike at 2000ms as you guys have said when I used to speak at lengths.  I guess if I knew the beam was overloaded or something that it would atleast give me something to go by and could be somewhat understandable but it just happened overnight and hasn't been the same since.

Actually now here to report that it is acting alot better than ever! My game is even working and apparently they are hearing me on Discord today.. Yesterday I didn't have this result at all I would cut in and out and turn robotic sounding.. My latency is still spiking though, even with that setting disabled but  today they have been hearing me just fine with that setting enabled or disabled... there's a couple occasions where it will go back to unusuable but now but today it seems pretty good. It's still not what it used to be but the fact theres any improvement at all is hope

Right, we were still able to hold a conversation on Discord. We just observed the latency going up to ~2000ms after a while, but we could still hear each other. There were no drops in the middle of the conversation.

The past two days, it finally seemed like it was actually trying to get better.  (The first two days ever since the beginning of October when this started)

The day I responded and said that things were getting better and people were able to hear me on Discord, I would describe it as 45 minutes after that post was made the internet "fell on its face" and did not return untill the next day.  So Day 1, about 12pm-3pm... Day 2 was a little better, 12pm-7pm. Day 3 today, all gone. Keep in mind when it was "acting better" even websites were loading better.  Now today, it has been nothing but all bad. They can still hear me on discord but now the webloading is horrible. It's strange I just did a Hughesnet speedtest after doing a slow Hughesnet Webresponse that read I had 23mbit download, and a 1.56 mbit upload.  Why in the world am I getting those speeds if you can't even see it in loading webpages I don't know.    The hughesnet WebResponse test states 6.1 seconds but I will have you know, that it took a good 2 1/2 minutes for the results to actually show up. So really it was more than 6.1 seconds but we'll just go with what it says I guess.

It states 6.1 seconds but took a good 2 1/2 minute before results actually showed up.

Between refreshing this community thread, then having to relogin because you can't reply, then having to get to the page again today was a nightmare and very frustrating.

There's a glimmer of hope that there has been any improvement at all, but something just keeps making the internet fall on it's face and it just doesn't seem to know how to recover it.

I'm running out of suggestions.  I'm now wondering if maybe trees have finally grown infront of the dish (within 2 years of having it)

2+ years ago on install day they pointed the dish kind of into the tops of some trees that were probably 100ft away.  Giving that was 2 years ago I assume that is a possibility.  I been waiting on a non windy day so I can turn my dish off (so no send and recieve) and get my Drone up there to get an aerial perspective to maybe see from that side of the trees if the dish is clearing or not.. The past few techs that have been out here don't seem to think those trees are a problem, however or they just did not want to think about having to move it as the roof on the house is steep. I'm not sure.  I got behind the dish yesterday and looked at the top of those trees and from that perspective it does appear that the dish is going right into the tops of those trees now (2 years ago it looked like it cleared the tops just barely).  These trees are in a very bad location to just cut down.  They are on a steep incline, and beneath that incline is a highway.  The trees if cut would probably land in the highway.

There is another spot on the roof, that is up even higher that seems like it would have been a better view of the sky, and probably should have been it's first location to begin with.  But to move the dish would mean running longer cable.. And just seems like alot of work.  I'm out of suggestions,  and only trying to think of everything that could have suddenly effected the satellite. I personally would think if the trees are messing up the satellite it would reflect in the signal strength.. But I am seeing 116 even 120 signal strength. What I don''t know however is if maybe it's getting good signal but the tops of the trees are bending the signal.  What is your input on that?

Here is my satellites perspective. 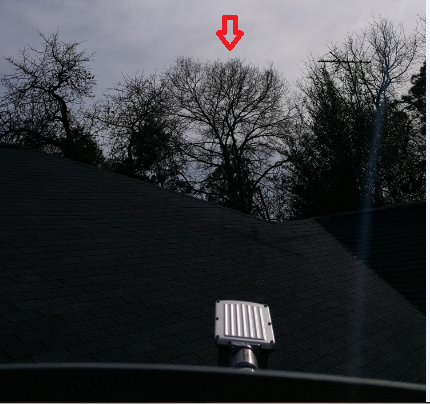 Techs haven't seen it as an issue but with no idea of what's going on I'm running out of suggestions.

But usually in the past, winter time was our best time for service.  It was during the spring and summer time that everything worked a tad bit slower but always worked great compared to how it is now.

Today is even worse than yesterday. Absolutely unusable and honestly unacceptable.  There for few days seemed like things were going to get better but now the internet is going right back down the drain as the days go by again.  This time, I have a screenshot of the internal gateway showing some issues.  (It has always been saying I getting good latency now multiple times in a row did it show me these same high numbers, but of course I bet by time you get this message and go into my site and check I'm sure then it will tell you everything is working normally.

It still is not showing much of a problem in speed tests, today the speed test went to 16.79 download and 1.24 upload, versus yesterdays tests.  Even the page response test turned back 2.1 seconds, but the actual web surfing is even longer than it was yesterday. But yesterdays web response yielded 6.1 seconds... It took me all of an hour to get those few small simple steps completed.  I was trying to write this post on the satellite but waiting 5-10 minutes for the page to load, to the pages timing out and having to "Retry"
to hit reply I couldn't handle it anymore and had to switch to my Verizon Mobile to make a post.

In my opinion all these tests are pointless. They do not back my story up. Except the web response, it someonewhat is trying to tell my story but still a big lie as it is more than 6.1 seconds for a page to turn up.  I would gladly record my browsing experience if anyone has a suggestion on what to use to record to try to prove and how to send it in. These tests show good signs but when it comes to actually clicking a page and loading it.  I really don't have nothing to prove to anyone but by goly I sure do wished I could prove this.  This is starting to make me feel crazy.... 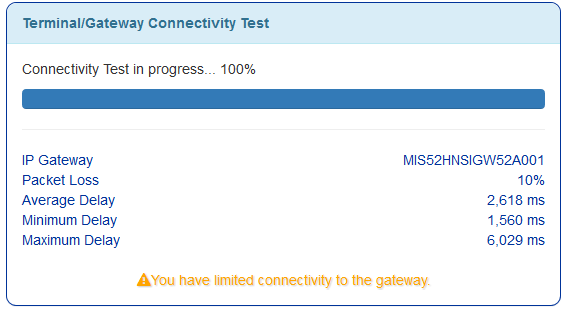 Multiple times today it kept giving me these same results while webpages are timing out, taking 5-10 minutes to load. 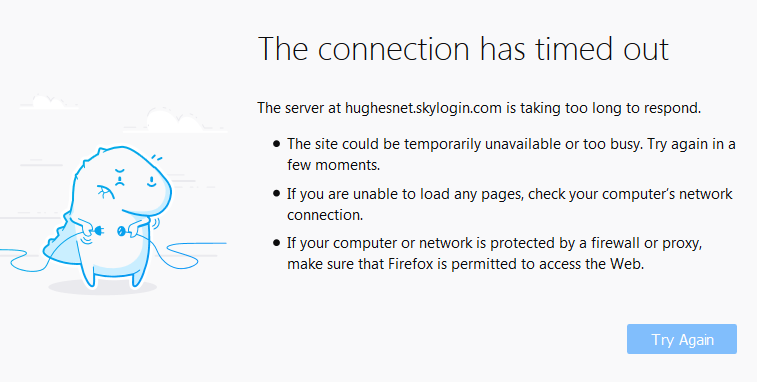 The dreaded timeout that keeps happening even after "Try Again" and even closing browser all the way out and reopening it.

Though there certainly are occasional things that can cause packet loss, like bad weather at your location or your gateway's location, with your system's track record it's a little worrying.

Hopefully, when she's back on Monday, Liz will be able to dig a little deeper, or have the engineers do so, to figure out just what is going on.

Regarding the tree, though it seems like it would be it may not really be in the way (at least not now), as the look angle of the dish is actually a bit higher than what it appears.

The picture below most likely isn't the same angle as your setup, but it will give you an idea of what I'm referring to, with the look angle being higher than the dish itself, or the radio arm, makes it appear.

@GabeUI see! Thanks! Yeah after seeing that picture it even makes sense now.  Just couldn't help but to throw it out there at the time just in case but at that angle I do believe it is clear.  Cool!  Yeah hopefully things will get better and we can figure it out once and for all.  I appreciate your response

You're welcome.  I actually had the exact same fear when I originally had Gen4 installed in early 2016.  I had a tree which I feared was in the way, and the dish seemed to be aimed right at the top of it.  It turned out that the look angle was actually about fifteen feet above where I thought it was at that distance.

And now, the one in between the dish and the tree in the red circle that I cut down, which you can see in the picture, has grown by about 15 feet since last year, so it's going to have to come down this spring.  It's a black locust tree, which grows really quickly, as well as having really nasty, long thorns which catch you when you're going by on the lawn mower. 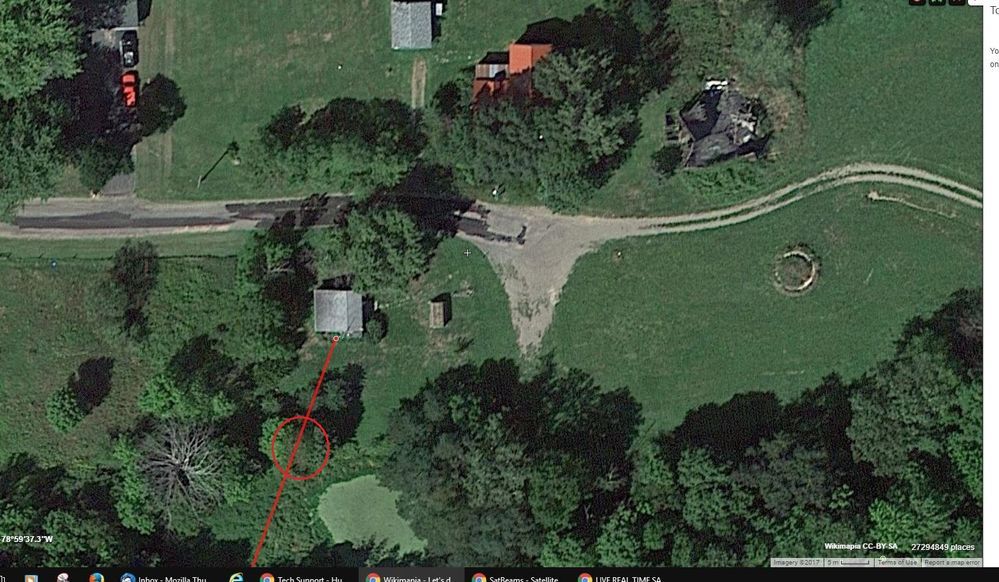 Tree I had to cut down in circle