We recently upgraded our service from Hughes Gen4 (Dishnet) to Gen5. The service was initially impressive, especially compared with what we were used to Gen4. For the first week or so the speeds were great. I ran a few tests as we were usually at about 20mb/s. Video on Amazon Prime streamed in HD with no buffering. We were happy.

After about a week the speeds seemed to suffer. I've been on Gen4 so long I've gotten out of the habit of streaming (used to have FiOS at another house). I tried to watch a few shows on Amazon and kept getting errors from Amazon saying my connection was too slow to stream, even with my video option set to "data saver", Amazon's lowest stream rate. I initially assumed that I was just in the evening rush, which we'd gotten used to on our old service.

Then our service got REALLY slow. I ran a few speed tests on the my.Hughesnet.com support panel and was shocked to see I was getting download rates of less than 1mbps. I recycled power on my modem and that seemed to fix things. My first test was around 18mbps. That didn't last. Here's a sampling of consecutive speed tests I had a couple of nights ago:

I've called the Hughes support line twice and spend well over three hours in total talking with tech support. I'd already done practically everything they asked of me including: turning off all other wi-fi devices, running tests connected with a LAN cable, not wi-fi, running tests in safe-mode, restarting modem, etc. One huge frustration I've had with Hughes support has been the amnesiac quality of the tech support. I was careful to get a case id from each tech support agent to ensure we wouldn't have to start all over at zero with each call. Each agent assured me they were taking detailed notes and would ensure those were available for future calls. They didn't.

On the second, 1.5 hour call, I had to go back and literally do every single step in the troubleshooting process I'd already done the day before. I'm not proud, but I lost my temper and was rude to the agent. She offered to have a technician come out a couple of days later (today)...if I paid $125. I refused, and she said she could cut the price in half. I refused again and said I'd cancel the service before I paid. She agreed to send the technician for free.

The technician came today and tooked our system over. He couldn't find anything wrong. He agreed to swap our modem for another. I'd hoped there was some kind of firmware problem with the modem. Our first few tests seem to confirm this diagnosis. The first few tests on the new modem were great - upper 20's mbps. The tech left, I started watching some shows on Amazon. My speeds have cratered again. These are my last four results from testmy.net: 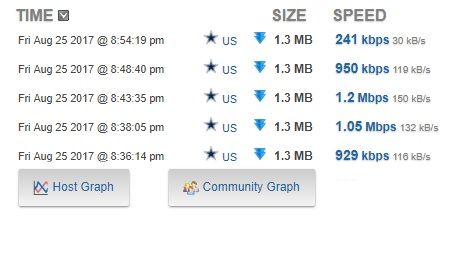 I'm at nearly a complete loss for what is going on. Has anyone else experienced this kind of degraded service? It almost seems as if someone at Hughes has selected our account for especially slow speeds.

One notable thing - our upload speeds are all great, typically between 2.5 and 4 mbps. How can that be when my down speeds are as bad as they are?

I just recently upgraded from Gen4 to Gen5.   Originally I was not going to put up with the Gen4 poor service after two years.  The major issue I had with Gen4 is I continuously switch to my Verizon wireless if I wanted to watch any Amazon Video, Funimation, or Netflix.  Also, the only way I could run my Critical Security for Windows 10, macOS Sierra, AppleTV, or Linux systems.  The biggest security issue I have with HughesNet is dealing our Canvas system that uses Shibboleth.  I have to use my school VPN dialer or my Verizon wireless to connect to my university learning management system.  The school uses the Federation Services for Shibboleth Authentication.  After communication with other network security administrators at other universities, this seems to be a common issue with HughesNet users.  HughesNet is not security friendly with Shibboleth Authentication Services.

And you are correct, Gen5 is Substantially SLOWER than Gen4 after one month.  I only upgraded because the sales promise that Gen5 would resolve my downloading of security updates for my operating systems and the cost would be below 100 dollars.    So far neither is true.  The first month everything worked flawlessly, primarily to good to be true.  After one month, the cost is more than what was the promise.

If you go with the automated testing that will execute on its own, make sure you set like 30 to 60 minutes between each test so you don't consume too much data, as well as check the NFW option so that the test doesn't suddenly forward to packages over 25MB in size.


@donagibbons  If you have an issue, I suggest creating a new topic, post a link to your results, and follow any advice given.

And you are correct, Gen5 is Substantially SLOWER than Gen4 after one month.

If that's what you're experiencing, that's unfortunate, and hopefully the cause, whatever it may be, can rectified.  With that said, it's not as if it's by design or deliberate.  Hughesnet isn't lowering customers' speeds after their first month of service.

The last time I followed you suggest to post a new topic, you and your buddies just deleted the question because the results did not meet your dream world.   I have been using and creating bulletin board systems, now called community boards, for over 20+ years, and some have been friendly, and some have been not so friendly depending on who is in charge.

Only mods/reps can delete topics.  Not customers.

What about System Admins?