I believe that I have done this correctly, though I do not know what was meant by "disabling radio signal" on my HT2000W modem. But here are my usage screenshots after I think I did that. I've been having issues for several months now with both my data usage going through the roof and my internet speed going incredibly slow (streaming a movie should not require buffering at 2 minute intervals if we have 25mbps). Help! 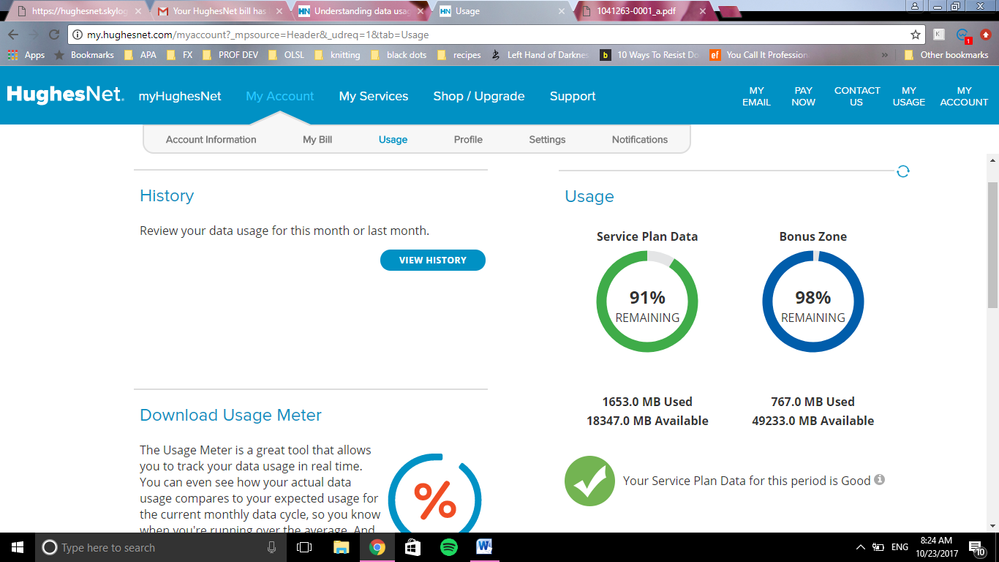 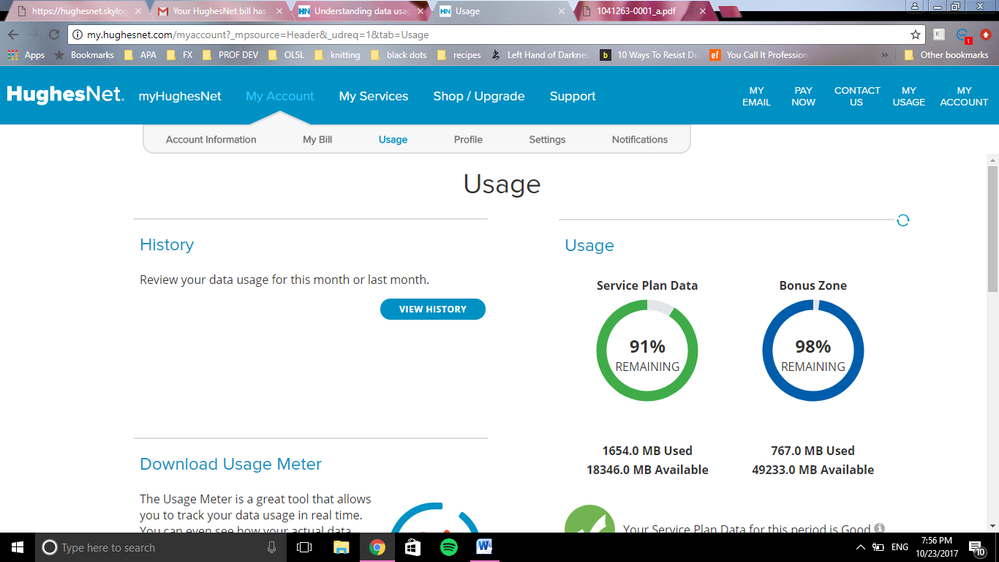 Re: Speed and Usage Issues

Your screenshots indicate that something on your end is using the data.  The modem isolation test that you performed basically establishes where the data drain is, and being that no data was used while the LAN cable was disconnected, it shows that the data usage is on your end, not Hughesnet's.  Not disabling the WiFi doesn't appear to have mattered, as nothing used any data during the test time periods (8:24AM - 7:56PM), so that's okay.

Regarding the data usage, the first thing we need to know is what you have connected to the service.  Desktops, laptops, notebooks, tablets, phones, a satellite TV receiver, etc?  Also, knowing what Operating System the computers have may help (as in Windows 7, 8.1, 10, or some other OS).  It looks like the one in the screenshots has Windows 10.  Knowing what you have connected will give us some ideas of where to concentrate, as in what is most likely to be using a lot of data.

With regard to at least the computer you took the snapshots from, and any other Windows computers you have, installing Glasswire, which is free, may very well help.  It's a program that monitors the data usage of the Windows computer it's installed on, and can tell you just what on that computer is using the data, and how much, as in apps/programs and Windows processes.  Make sure, once it's installed and running, that you change the options to "Incoming & Outgoing" and "External".  The options drop down menu is to the upper right of the circle graph while in the Usage tab.

As for buffering while streaming, try turning off the Video Data Saver and see if that makes a difference.  You can do so through the HughesNet Usage Meter (Video Settings), or by signing into the HughesNet myAccount site and clicking on the Settings tab.

What is the Video Data Saver?

You should also consider installing an ad blocker in the browser you use.  Adblock Plus is probably the most popular one.  Make sure in its options to uncheck "allow some non-intrusive advertising."  Ads can use quite a bit of data, and installing an adblocker will help to cut that down.

Re: Speed and Usage Issues

In addition, to see what kind of speed you are actually getting, try running a couple of manual 25MB sized download tests at testmy.net.  Make sure to run the tests with single device connected directly to the modem with a LAN cable, not something that is connected via WiFi.

It also would be a good idea to run the tests while signed into an account that you've created at testmy.  This will give the advantage of having the test results saved in a single location that the reps/engineers can easily view if it's determined that there is a speed problem.