Rain in the forecast for the 22nd, so rescheduled for the 23rd.

Will report back with visit details...

Although I had rescheduled for tomorrow, the HN contractor came today (22nd).  Per the work order, he changed the antenna polarization.  Given my symptoms, he was no more optimistic than me about the "fix" working.   ...But certainly giving it a try!

Will need to gather some data over time to see if performance actually improved.

In a day or two will report back with observations.

Results of polarization change as of 23 Oct....   Viewing small youtube videos, on a week day morning seems to incure less buffering.  Not so much for evening times - still significant buffering.  The % buffering time is a bit hard to quantify.  Still evaluating.

Here is an example of performance on a week day evening...  Time to download (not install) a Microsoft update  of 6 files totaling 385 MB was 15 minutes.  FWIW, for the first 3 minutes after starting, there was zero download activity.

If I got the math right:

After more evaluation will report further....

No improvement yet.  Placed another call to phone tech support.  They called back Sat, but after hearing my symptoms, wanted to wait until the begining of week when higher level support will be available, then they said would call me.   So, waiting to see.

One thing you've got to remember is that system updates, especially from Microsoft, are one of the worst ways one can gauge the speed of their service.  Microsoft downloads, whether for system updates or even just program downloads from their servers, can be awful, regardless of your overall speed, and even if your speed was great and there was virtually no congestion to speak of, though the ones through Windows Update tend to be the worst.

I had a ~600MB update a couple of years ago that took over 26 hours.  It's the only time in my nearly 15 years with HughesNet that I've left a computer on overnight.  Updates were always a bit slow around that that time, but never THAT bad.  They time/speed eventually crept back up to what had been the norm, but even to this day they sometimes take longer than you'd think they should.

Downloading the updates directly using WSUS or the Update Catalog can be faster, but they can still take a long time with those methods, as well.

To be honest, though downloads of any kind don't always tend to match overall speed test results, when I need to verify real time speeds I've found that downloads from Linux Mint tend to be the best for me.  Usually from Clarkson U or James Madison U.  I don't let if finish, of course, as a "test" would use upwards of 2GB each time, which would be ridiculous, but I let it run for at least twenty or thirty seconds to see what's going on, then stop it.   It can use more data than a testmy test, but it's still a decent way to gauge overall download speed in real time.  Again, though, just like other downloads, it's not always the most accurate for that purpose, as you're relying on servers that aren't designed for speed tests, but rather downloads, but it can still give a good idea of how your service is doing in a real world scenario, overall speed wise.

Regardless of this particular aspect, I hope they can remedy your issue(s) permanently, and soon.

No improvement yet.  Placed another call to phone tech support.  They called back Sat, but after hearing my symptoms, wanted to wait until the begining of week when higher level support will be available, then they said would call me.   So, waiting to see.

No call back on case 124537656.  So, I called them.  This is SO frustrating!!!!   The 1st level support person said an attempt was made to call me.  NOT true.  No calls, no missed calls in phone log.  Then told me a speed check indicated no problems and the case was closed.  I told her that a simple speed test would not show the problem and that is why I needed to escalate to engineering.  She did not understand, repeatimg the same old mantra about speed tests and latency.    Also, said that since speed tested OK, she could not revive the old case or create a new one.  Asked for supervisor.  At first the supervisor focused on one pdf file download I used as an example.  It took a lot of conversatiom, but finally convinced her that the pdf download was not the central issue, but only an example.of a general problem. I repeatedly told her that a simple speed test would show all ok, but would not detect what is happening.  She spoke with engineering and returned with the usual -  Since speed tests were within specs, there was no promlem and so, would no open a new case.  After multiple repeats, and at my insistance she re-contacted engineering.  This time she said engineering would call me in an hour or so.   I hope they really do.  It seems that HN does not have the ability to comprehend the difference between instaneous speed checks and overall network throughput - Or they will not admit to having a problem, or both.  The supervisor asked me to do another testmy speed test.  She was at a loss as to why the download speed result was 266 Mbps.

"One thing you've got to remember is that system updates, especially from Microsoft, are one of the worst ways one can gauge the speed of their service. Microsoft downloads,... "

Ok on that.  It was just another attempt to provide an example.  Like the multiple failures to download a pdf - the example I used with phone support. ...After several tries it finally downloaded.

Due to phone support's lack of understanding of the difference between and example and the general problem,  phone support initially focused on me having only one problem, downloading a specific pdf.   So frustrating trying to explain that the pdf was not the base issue, just an example.

BTW, I know you understand the difference but were simplty commenting on the specific example.

FWIW, here is a graphic of what my symptoms indicate  (and what HN does not admit to, or test, when trouble shooting a throughput issue): 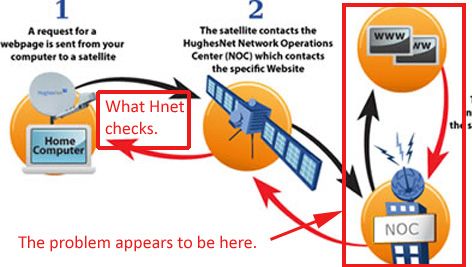 Damian - Sorry, got you name incorrect in an earlier post.

Have gotten only one thing from engineering, disappointment.   The proper issue has not been addressed even though the "case" was closed, and they are failing to call back as promised.   They simply did a remote speed and system check, then concluded there was no problem.  They did not  seem to understand the problem is with poor throughput due to delays, not speed. It seems (although no one will address it) the bottle neck is the result of problems within HN;  hubs - network op center - outside world.     Sure appears HN has over sold their capability to deliver, or there is an undiagnosed internal problem.  See my recent posts.

The top part of that red box is CenturyLink and I'm telling you it's them, and they're getting worse.

I had all three twitterbots timeout again yesterday and none of them had anything to do with HughesNet, just the CenturyLink backbone. It's broken.