In the past, my usage stats have always shown much higher download volume.  This makes sense, because I do a lot of streaming and surfing, but not much web design or other activities that I would expect to do more uploading.

In the last month, the volume seems to have reversed; I am showing high upload volumes, sometimes 2-3 times the download volume.  Needless to say, my data allowance is evaporating at an alarming rate.

I have done virus tests on all the computers, tablets, etc.  Even power cycled the LG TV.

Any ideas on what might be going on here?

Could be software or device(s) syncing to the cloud. Many newer devices have the default set to sync automatically. Any new toys added recently?

EDIT: I forgot to ask how you checked for virus/malware. What AV program and did you use something like Malwarebytes?

If you don't have it, you should take a look at Glasswire.  It's a free program that will tell you just what is using data on a Windows based computer, as well as where it's coming from and where it's going.  It shows what programs, apps and Windows processes are using the data, and just how much each thing is using.  As mentioned, it can also show where it's coming from, and where it's going, by IP address.  It's a VERY handy tool, and practically a must for anyone trying to figure out a data usage issue.  Again, it's free, and it only monitors the data for the Windows computer it's installed on, so if you have more than one, you'd want to install it on each one.  It's also non invasive, and uses practically no data itself, save for the initial program download.

Also, after you've got it installed, make sure to set the options to "Incoming & Outgoing" and "External".  The first so it monitors the data coming into, and going out of, your computer, and the latter so it's only monitoring that data, and not any data passing back and forth within the computer ("Local"). 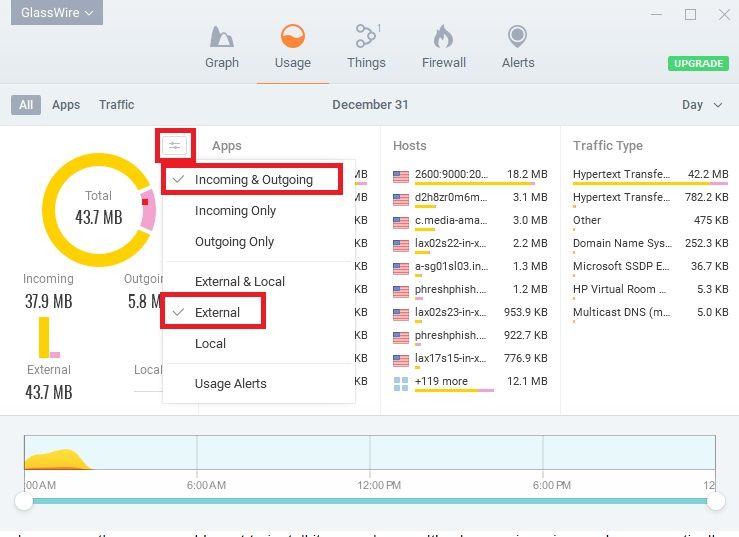 Thanks for the response.

I use AVG on all devices - two laptops, two iPads, an LG TV, and a variety of other devices that usually stay turned off.  I ran a full virus check with AVG and found nothing.

Been awhile since I used AVG but I remember Malwarebytes finding things that it missed when I was using it. Maybe they've improved since then.

Been awhile since I used AVG but I remember Malwarebytes finding things that it missed when I was using it. Maybe they've improved since then.

I used to use Avast on my notebook computer, but it was becoming sluggish.  I tried AVG and it was even worse.  Granted, my notebook only has an AMD A4-1250 processor and 4GB of RAM, but it was awful.  This was in 2017.  I ended up just going with the Windows Defender that the Windows 8.1 on it comes with.  I only have the notebook as a spare and really only connect it once every couple of months to keep it up to date.  That it was a freebie is the only reason I have it.  If I used it regularly I would have a better AV installed on it.

Maybe today's version of AVG would run better on it.  I know AVG is a good AV, or at least it was the last time I looked at reviews for it.