Just had HN installed.  I have a "long" house and cannot reliably get Hug2 (forget Hug5) in the separate garage nor out on the lawn overlooking the river.  Distances from the HT2000W are 100' max, but the house does have brick veneer.  The installing tech tried the Hughes range extender which didn't really do anything for either location even as he moved it around (so I didn't buy it and he removed it).  Looking for recommendations on other (more powerful?) products that would be compatible with the HT2000W and allow me to access my sat internet connection from these locations.  I've googled some outside mounted powered extenders, not sure what I should be looking for in specs to avoid conflict with the Hughes stuff already installed.  Ideas or recommendations, please!!!!

The Hughesnet Range Booster should have worked if the installer synced it to the HT2000w properly, and placed it near the fringe area of the 5Ghz and 2.4Ghz signal.

Are you trying to get signal outside your home? Or just increase the signal strength inside?  Would you be against running a network cable through the attic or under the house to the location that is a deadzone for the wifi?  I personally dislike signal repeaters, they can cause more harm than good, and typically suggest if someone has the ability to run a network cable to another access point that is configured with the same SSID, Password, and Encryption type that they do that instead of using the basic signal repeaters.

If you want to use a signal repeater, then most any of them should work, you will just have to configure them manually in most cases, like you would an access point.

The following article should be able to help you decide on a good one, but I will give you a word of caution, avoid the cheaper Netgear units (Such as this one) like they carry the plague!  I work in a returns department at a warehouse where we have to test each thing that comes back, and by far, those things are the absolute worst, and most highly returned extender I have ever seen.  We rarely see ones from the NightHawk lineup, or Amped Wiress brand come back.

I would personally go for the Netgear Nighthawk EX7300, as this can be setup to be either an Access Point using a wired connection back to the router, OR, as an extender/repeater.


If you are needing wifi-access outside, then be prepaired to potentially have to run a network cable to an outside location or two, to get proper coverage outside the home, and outdoors access points tend to be a bit costly for quality ones in my experience.

One last thing I would like to note...  Care to draw a rough map with the location of your HT2000w, and where the signal cuts off at, and where you need it to be present?  How high up from the floor is the HT2000w?  If you can move it just a bit higher, you may get better reception.

Thanks so much for your thoughtful answer.  I didn't realize your answer was in my inbox, no alert via normal email apparently.  I have tried an Amped 2600 device (inside house) did not work any better than the Hughes extender.  I do believe an external extender/repeater may be what I need, and I am very open to running a network cable up through the attic to a roof mount device.  Please note that within the house, connectivity drops off faster than I expected. 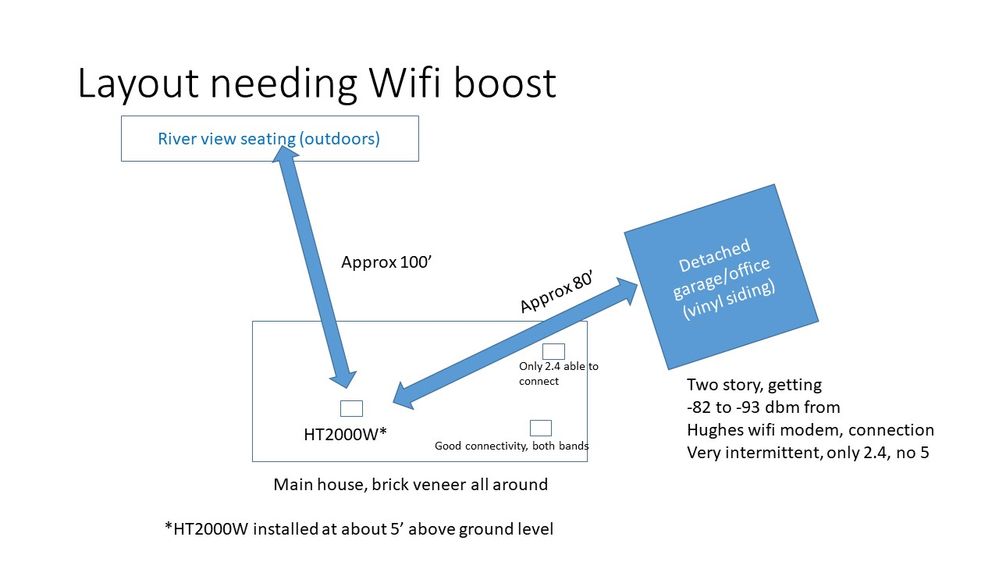 Yeah... You're going to be in for a hard time with wifi overall...

When a wireless signal has to pass through a wall, it can drop in signal quality quite signifigantly, especially when it comes to exterior walls because of the insulation, and in your situation brick.  So you will certainly have to have outdoor access points, as well as an indoor one if you want access outside.

The downside about AMPED Wireless, they broadcast a signal at the highest level that the F.C.C. allows, however, most the time you can't broadcast from your mobile devices at that same power level, so you might see the signal, but it (the base unit) can't see you.

If I was in your situation, with a 2 story home (what are the approximate dimensions?) I would place at least one access point on the ceiling as close to the center of the home as possible, as high as possible.  I would then place one outside the home on the wall as high as possible facing towards each area.

Granted if money wasn't too big of a concern I would highly suggest digging a trench for a direct burial network cable and install the access points in the actual outdoor area where wifi access would be needed.  Only because at ~100 foot with no obstructions, you loose enough signal that speeds are highly impacted, and much further you will have serious issues just connecting.  You might be able to see a network at that distance, but your device would have a difficult time talking back to the network.  Think of it kind of like one person yelling really loud, but you can't yell as loud, you can hear them, but they can't hear you.

The AP-Outdoor+ units would be installed outside, one in or around the garage area, and the other near the river view seating area.  I would trench network cable to those locations as well, as I said earlier, that distance, most every access point will have difficulties reaching. You would go from about -40dbm standing near the wireless access point, down to about -80dbm at 100 foot in a clear line of sight. When you are reaching -80dbm, or lower, you start getting a lot of packet loss.

The reasoning for POE, is so you don't have to run power to those locations to power the equipment, as the power would be delivered over the network cable.

In the end, you may want to find a local contractor that has done this for a living as they will be able to more easily gauge exactly what you need to get wifi access in those locations, as well as to keep you from scratching your head trying to figure all the small details out.  Just be aware... Costs are going to be high regardless trying to get signal to those areas, but it may be worth it to find a local company that can handle the task of installing the equipment as they will be able to do a proper site survey and recomend exactly what you will need.

But, I strongly suggest sticking with Ubiquiti gear if at all possible, because managing that much stuff is easier with them since you access only one thing (The CloudKey handles everything, you do the configuration in that!) instead of other manufactures where you typically have to setup each thing individually.

If you are still gung-ho about installing and setting everything up, I strongly suggest getting assistance from the UBNT community.  They would know far more about each product than anyone else here, and could potentially provide far better recomendations.