Ordered  Hughes internet in October 2017, could not get consistent wireless on my laptop sitting in the same room 12 feet away, service was slow and would drop connection numerous times a day. My daughter got so disgusted because of bad service she refused to even use the wireless on her tablet and relented to use the internet available through T-Mobile on her phone.

Question...Why am I paying for a service that I can't use??? And...why do customers have to go through a long drawn out manipulative incredibly frustrating ordeal to prove they are getting bad service??

Time and time again getting nowhere with customer service. How many times do I need to reboot the modem?? How many times do I need to call??? And where are all the GB going within 24 hours? CSR's telling me they did not have management I could speak to. Three technicians being sent out which verified slow and inconsistent connection dropping every other hour. I have not been able to use your wireless service and yet you want to charge hundreds of dollars in early cancellation fees and remain to charge me for insufficient service???

What is the problem that a customer cannot just cancel bad service, but have to be pushed and manipulated relentlessly, week after week, month after month in useless attemptS to fix a clearly unfixable problem. GOD HAVE MERCY....JUST ADMIT BAD SERVICE AND CANCEL THE CONTRACT!!! It's very simple. Do you think I have nothing better to do than reboot my modem over and over and talk on the phone for hours?

How many techinicians being sent out is the magic number?

I have been drug through 4 months of going round and round with nothing getting done. First I lost work hours not having wireless service, then add the lost hours I have spent on the phone with customer service. I DON'T GET PAID FOR THOSE LOST HOURS!!  So much work time lost and getting nowhere with you, I was forced to order internet service through someone else so I could do my job. I have not used Hughes service since mid December.

I have work to do and a home to support while you drag me though days and hours of nonsense getting nowhere except having my account credited numerous times. Being told repair has to go through an escalation process which has actually proved to be absolute "just talk" and a complete waste of time. How many times I was hesitant to call because it was worthless and I got tired of going round and round with manipulative customer service reps who wouldn't listen.

Phone call after phone call lasting  an hour and forty-five minutes and longer.

After two months and getting extremely upset I finally get to speak to supervisors (Ira Lopez and Ian Jacobs). Three (3) technicians have been sent out. 3, I said three, I'll repeat 3....not just one, not just two, but three (3) technicians....all which verified everything was set up right but the wireless was inconsistent and slow.

The first technician was not good enough?? Customer service said they did not receive the paperwork. Yet American Dish verified it was sent to you! On the phone twice doing speed tests.....verifying AGAIN....slow wireless internet service. I made two calls to customer service with the owner Mike from American Dish on the line using three way calls. He AGAIN verbally verified bad service to your supervisor.

Last week I spoke to supervisor Ian Jacobs, we spoke over and hour and a half (again) on the phone which I was told he was escalating the repair process to confirm bad service to have verification to cancel the early termination fees. NOTE: I have been told this twice by supervisors Ira Lopez and Ian Jacobs!! Supervisor Jacobs told me I was going to receive a call around 4:30 pm that day. No call!! It's now a week later, still no call!!

Listen very carefully!!! I am not going to call again and go through another phone call for hours and get nowhere. I'm done! This complaint is my last attempt before I call The Better Business Bureau and the State Atty General Consumer Protection Dept.

CANCEL MY SERVICE, VOID THE EARLY CANCELLATION FEES and THE RECURRING CHARGES (AGAIN)!! for whatever reason beyond control.....THE WIRELESS SERVICE FAILED!!

My advice to you Hughes Network....Get some training in how to be successful in business stressing moral and ethical business practices and how to care for your customers. If you don't....you entire business will end up in the rubbish bin. First though, you need to have a service that is beneficial and worthy of payment. You might actually read and care about your reviews...they are horrendous. https://www.consumeraffairs.com/internet/hughes.html

Starting to wonder myself.
0 Kudos
Highlighted

I'm glad you found the community, thank you for posting. Please give us some time to review all your case notes to see what we can do. To help expedite the process please post your testmy.net results URL so we can see the history of your speed tests you ran with our phone/chat agents. Otherwise, I'm only seeing two speed test results from last year: 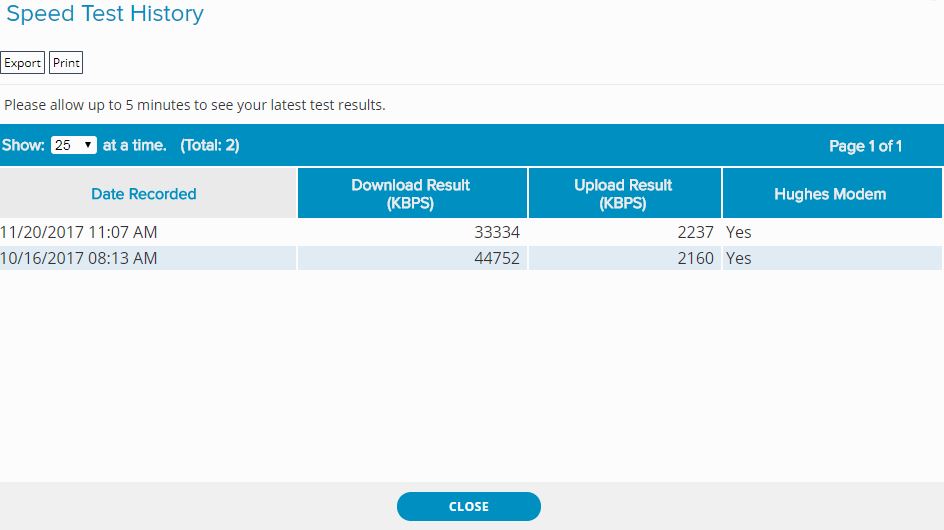 First, please don't post in such large font, as it makes the post very difficult to read.

Please check your private messages in the top right corner of the community page as I've sent you a PM to further address your concerns.