I am looking for an official response on this matter, as I am considering cancelling the service and buying a repeater to get on Verizon as the signal seems to be improving.

Are those of us on an alternative satellite hn7000s stuck on it forever?Does Hughes have any plan to cut us a break and raise our download.

I think it is beyond ridiculous that people with gen5 fapped are getting far more than I do not on Fap.

On Vivaldi which shows the down load speed (I tried only to see the download and upload speed
Down 128kbps not on Fap at its best usually about 80kbps
Down 3.6kbps on fap......Lmao that is beyond acceptable, pathetic better explains it

Gen5 fapped is 10-50 times faster, paying less money than I am or actually the same at $50 month.

Honestly you can tell it has gotten worse as they stuff all of the Legacy plan folks on 1 transponder.....

This isn't an official response, as I don't work for the company, but I can tell you the realities of it.  The HN7000S is on an older satellite and getting older all the time, and there will be no change to that system to be like Gen5.  It's not set up to be able to support the kind of service that Gen5 is, and they won't sink money into improving/upgrading an old system.  The only option you have if you would like to get service like Gen5 is to upgrade to Gen5.

If you call and ask they may have a deal for you to upgrade to Gen5.  You'll need a new dish and modem, but Gen5 is a LOT better than the legacy plans in every way.  I had the HN7000S until Feb 2016, when I finally upgraded to Gen4, then upgraded to Gen5 at the end of March 2017.  No regrets.

Is there some reason you have avoided upgrading to Gen5?

I am the only full time resident inside Olympic Nat Forest, America's only rainforest which means trees are not big but tremendous lol.... I am surrounded and bordered on 2 sides by Govt land, one side is called a Riparian Forest meaning it is within 300 feet of a stream, WA state has strictest water laws in US. You cannot by law drop trees inside of that named forest area, they just fall over naturally or never get cut. There are some whoppers just lying on ground.

There are 2 150-200 foot trees blocking my sat view south sitting on Govt land right next to property border.... If I was in Arkansas, lol, I'd just cut one but here I'd get busted for it so no way I can do Gen 5 unless I move. Hughes guy on online chat said no new service at my pointing direction.

So I'd guess it is coming to an end with Hughes for me... I don't mind slow, I am used to it, but tired of staying up every night from 11pm-4am to enjoy the service at all (yes I am up every night all night)

If they even offered us 1mb all the time and no criminal FAP nonsense I'd be happy, but we both know Hughes is not going to do that.

If you know, what direction is your dish pointed in now?  Is it pointed in a direction where you have a clear view?  I don't quite remember how to look on an HN7000S system, but do you know the longitude of the satellite you're on now?

And, you can actually input your info, choose the satellite (Echostar 17 or 19), and see on the following site exactly where it would point, by the picture... 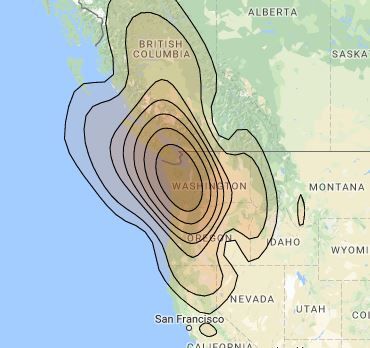 tpp
Freshman
In response to GabeU
Thanks for your help Gabe ...I may be good at keeping it going but I will need to figure out that link above in few minutes on laptop instead of galaxy

Is this what I am looking for??

tpp
Freshman
In response to GabeU
As for clear view.....yes but very narrow as the dish points down the driveway and trees on every side, it's actually on guys land next door and about 80 feet of cable thru the trees to me, if just a little bit off he would let me cut whatever I needed, I watch everyone's stuff out here so I have some favors coming...
0 Kudos
Reply

If I'm reading those numbers right, I think you're on the Galaxy 13 satellite, which is shown in the following pic... 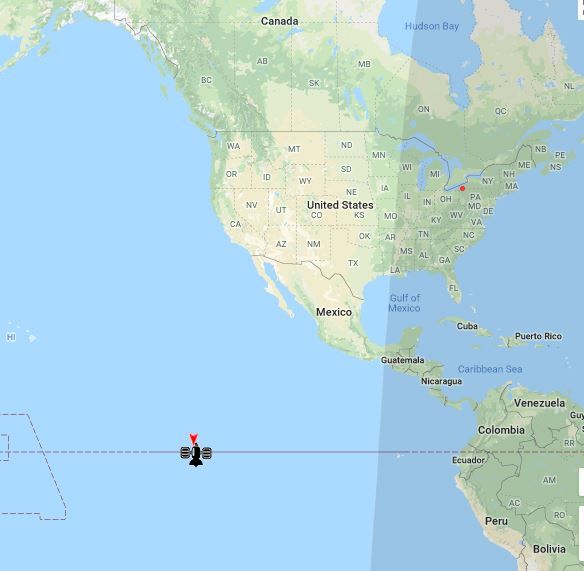 The following is the Echostar 17 satellite... 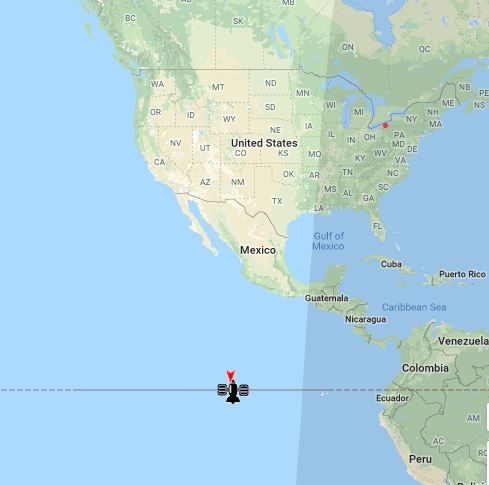 And another thing that may be a problem is that the ES17's elevation for your location is about 2 degrees lower than the Galaxy 13.  Further east and lower.  😞

tpp
Freshman
In response to GabeU
Hey.....again thanks at least there is some hope

But, I have a Directv dish that I no longer have in service which points actually further east and is set at about 30. Actually the directv guy was much friendlier and spent more time trying to figure it out.... the original install of Hughes was a joke cause even though I told everyone it had to go on a pole, he said he didn't have 1 and was not pleased and put it on that metal roof platform lying in the driveway free standing....dog chased a racoon and caught it at the sat and their short but intense fight bumped and moved the dish, Hughes exec customers service had me take a photo and paid for him to return and do it correctly.

Do you know if any of those sat finder apps actually work... I am going to try and download 1 and see what I can come up with, it says they help you point your dish, but so many worthless apps who knows.

There may be some hope yet 🙂
0 Kudos
Reply

gokartergo24
Tutor
In response to tpp

If you have a Iphone..  SATOOLZ for Hughes is a good one.. But they do not make it for android..  If I was you.. I would put in a order for a upgrade to Gen5.. Have a installer come out and check it out for you.. Couldn't hurt..

I had forgotten about DishPointer, which is similar to a site already mentioned, but it's pretty easy to use.  I entered my address and hit search, which it then found, and then I selected the Echostar 19 satellite in the list, but the list has both the ES19 and ES17 satellites.  Below is what it shows for my house with the ES19.  And if you tick the options box on the upper right of the picture it will add that little red pointer, which you can move and will show you how tall an object can be before it will be in the way.  I would probably subtract a few feet of height from that part, as I don't know if I trust what it says completely, but the pointing (the green line) is dead on.  I have the green pointer sitting pretty much right where my dish is (you can move that thing to where your dish would be, or is already) and it points directly at the satellite, and the pointing I trust completely.  It's just the height at the red thing that I subtract a little from, as it says 49 feet right there, but I think a 48 foot tree would still be a little too tall, so I take a few feet off of what it says for height.  The tree that is showing there, and which I cut down last March, just before my Gen5 install, was actually about forty feet, and that would have been pushing it as in the top being in the way.  It's a pretty handy website.

So, go to that site, enter your address and click search, then, when it shows your home, move the green pointer to where the dish already is, or where you think it might go with a new installation.  Then select the Echostar 19 from the drop down list on the upper right and see where it points to in order to see if it's viable.  Then change to the Echostar 17 to check it, as well, though I can't say that the Echostar 17 would be an option offered for sure.  I only mention it due to them having put some Gen5 people on the ES17 for various reasons.

What the picture below is saying is that where I put the red mark is 63.4 feet away from the point of the green mark, which is exactly where my dish is, and at that 63.4 foot distance it's saying that anything under that height (49 feet) will not be in the way, though again, I would shave a few feet off of that height, not only because I think it's a bit off, but also to give room for tree growth.  Again, though, I cut that tree down, but now the one a little closer to the house and just under the line is growing too fast and will need to be cut down this spring.  It's a very fast growing locust tree, and I hate those long thorns on those things, anyway.  😛 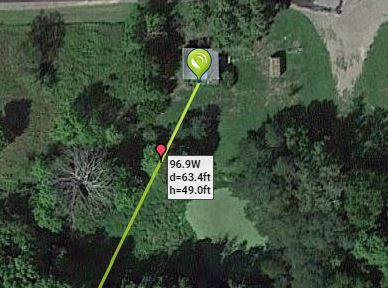 Also, what @gokartergo24 suggesting might be a good idea, too.  He's an installer, so he would know.  Also, and I can't speak for them, but it's possible that one of the reps might have some suggestions, too.  I'll tag them so they see this thread.

I really hope that there's something that would work.  But, of course, in the end you always have the Verizon Wireless option, so at least there's some type of light at the end of the tunnel, either way.  🙂

@Liz @Amanda  Is there an option that might work for tpp or some way to see if upgrading is feasible?

Edit: I can't really say much about the various satellite apps for Android smart phones.  I tried a couple one day with my phone, and while one locked me out of being able to enter any info manually (the presets didn't include the ES19) without paying for it, which I wasn't about to do, the other one was completely free, but I couldn't figure it out.  😛

Liz
Moderator
In response to tpp

Good suggestions, I'd go with gokartergo's idea. See if you have line of sight from your location, if not, you can cancel and be fully refunded since the installer can't activate your site.

Liz
Moderator
In response to tpp

It's been a while since we last heard from you, so we will close this thread. If you still have concerns, please start a new thread and include a detailed explanation so we can more effectively help you.