I am creating a new topic since I marked the last one as having a solution.. My previous topic still has the same information, but I will give a new consolidated version of what is happening and the steps which have been taken to resolve them.

I admit I was too quick to mark the thread as solved, and should have waited for the weather to clear up. Lately the weather has been great around here, and weather around the gateway (Albuquerque NM) does not seem to have an effect either. I waited two weeks to allow things to settle in, and the issue exists the same as before.

The logs show that this occurs even when signal quality is good. From the recent history I can see that it has occured between 109 and 115 SQF.

I am not sure what else can be done. I have been noticing more topics about this issue showing up in the tech support forum.

I know it's a long shot, but can anyone with these IDs confirm that their service is working normally?

Liz
Moderator
In response to Gwalk900

Just received an update that the network adjustments to address this concern have been implemented. Please let me know if the intermittent connectivity persists for you today.

Matt_Is_My_Name
Sophomore
In response to Liz 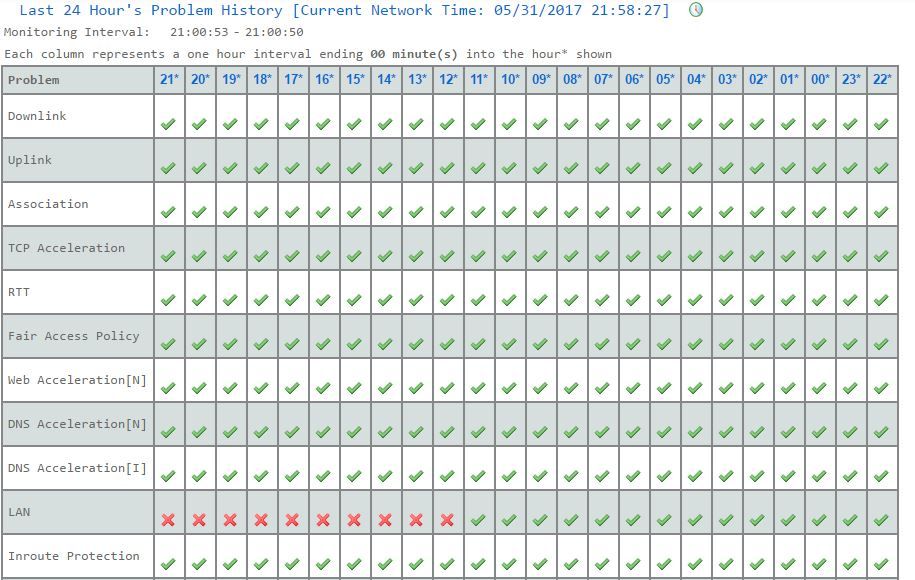 This is the first time in months I have seen green across the board for association and dns acceleration. LAN Xs were from my computer being off.

Looks promising. I will keep an eye on things over the next couple days and let you know.

I do believe the long drop outs have ceased. There have not been any for the past 2 days.

My thanks to whoever figured out the cause and fixed it. Soon, I can stop running my drop out monitor app now.

Liz
Moderator
In response to ebjoew

Awesome, glad to hear it guys! We'll pass along your feedback and confirmation to the engineers. Thank you again for your cooperation and patience while we worked to address your concerns.

Matt_Is_My_Name
Sophomore
In response to Liz

To be honest I forgot all about this thread for a while. I guess that is a good thing if you think about it..

It has been about a month since the fix was put in to place and the only outages I have had since have been weather related. I am going to tempt fate and mark this thread as solved.

Thanks for the help! And be sure to pass that thanks on to the engineers.

Liz
Moderator
In response to Matt_Is_My_Name

Thank you Matt, will do!

Matt_Is_My_Name
Sophomore
In response to Amanda

Saw something new in the event log. I have no idea what it means, but I figured I would share anyway.