A question for those in the know. Windows, user "created" USB external HDDs and partitioning...

A question for those in the know. Windows, user "created" USB external HDDs and partitioning...

First and foremost, I'm not putting this in the Third Party Products section as I'm really only curious.  It's not a thing I'm really asking for help with and I'm primarily interested in what others think.

I have two 500GB laptop HDDs that I wasn't using due to replacing them with SSDs.   One is from my Dell laptop and the other from my Acer notebook.  They are Seagate and Toshiba, respectively.

I purchased two Sabrent EC-UASP External 2.5" drive enclosures to convert them to USB 3.0 external HDDs.  One will mainly be used for general storage, while the other will be solely for system images from the laptop (3), my notebook (3), my folk's laptop (1) and misc files (1).  I save three months worth of images, with one image being saved each month from each PC.

I set up the newly created external drive and created the partitions.  Three for the laptop and three for the notebook, one for my folks' laptop, and one for misc files.  That's eight partitions, so it should be three primary partitions and one extended partition containing five logical drives.  But, this is what happened (Disk 2).... 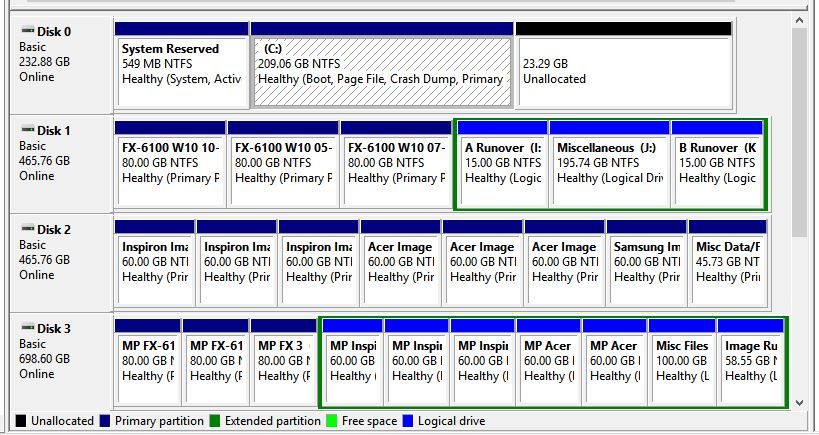 Now, when I click on Disk 2 and click on Properties it shows as "SABRENT SCSI Disk Device" rather than just the name of the drive, like "Samsung SSD 840 EVO 250GB" (Disk 0).  Disk 3 is my Western Digital 750GB USB 3.0 External HDD.  It partitions properly.  As far as I know, the new external HDD should be recognized and partition in the same way as the WD external HDD, but it doesn't.

This weekend I'm going to save an image from my laptop and notebook, and then I'm going to try to restore both of them.  I'm going to save an image from each on my WD external drive, like I normally do, before I do anything with the new drive, just in case.   With the new drive being seen as an SCSI drive I'm a little worried about both devices recognizing the drive during image restoring process.  If they can't, I have to find a way to fix this issue or go back to using the adapter that came with one of the SSD's.  It's only USB 2.0, but at least when I connect it to the drive and to my computer it recognizes the drive properly.  Well, I shouldn't say "go back to", as I've never used the two drives as external USB drives, but I've at least tried them with the USB 2.0 adapter and I know it works properly.

Pictured below is what I already had and what I know works properly, as in showing the drives as standard drives, but the drive will be bare, and it will be USB 2.0 rather than USB 3.0.  I contemplated other enclosures, but the ones I bought have good ratings, and I know Sabrent is a good name.  Plus, they were $9 each.  Ya can't beat that.  A cheap way to turn two unused laptop drives into external USB drives.  As long as they work as intended and the partition "issue" doesn't actually turn out to be such I'll be happy. 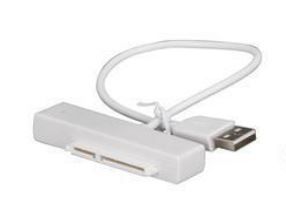 Re: A question for those in the know. Windows, user "created" USB external HDDs and parti

In case anyone happens to be reading this, I still don't know exactly why it's allowing so many primary partitions, though I still suspect it's related to the SCSI thing.  But, with this said, I saved a system image from my laptop, then proceeded to restore the laptop using the same image.  It worked flawlessly.  So, the drive having so many primary partitions might not be of any issue.

Re: A question for those in the know. Windows, user "created" USB external HDDs and parti

Yippie.  I figured it out!  It turned out that the problem was that I needed to convert the HDDs to MBR disks, or Master Boot Record disks.

Before converting them, the two HDDs were GPT disks, or GUID Partition Table disks.  I suspect this is because they both came out of computers that used UEFI instead of a traditional BIOS, and GPT disks are read differently when connected via USB cable vs an SATA cable to the system board.  Once I converted them both to MBR disks, which I did by right clicking on the part that says Disk 2 and clicking "Convert to MBR Disk", the partitions created like they normally do, with the first three being primary partitions and the fourth being an extended partition with multiple logical drives.