Testmy.net doesn't recognize my login.  I use my login credentials and get no errors. I'm taken to the site, but the site does not show me as being logged in.  When I run a test it runs it as though I were not logged in (digression: my speeds are slow.... the max has been around 13 -- no superfast Gen 5 here!).

Anyone else experiencing this?

I personally am not having issues aside from them not showing Hughesnet when using WAS...  Do you get any invalid password errors or anything?  Have you tried to disable WAS to see if the issue persists? I logged out, closed my browser, opened back up and signed back in.  Everything worked for me.

If it's still having this problem, and you can at least stay signed for a one shot thing, you might want to create a post on their forums regarding the issue.  CA3LE often answers pretty quickly (I don't think he/she ever sleeps 😛 ).

@C0RR0SIVE,  I wasn't getting any errors at all.  I would enter the crendentials and it would take me to the home page, but I was not logged in. ETA: No difference when disabling WAS.

@GabeU,  I may post something because to make matters weirder, the whole thing works if I check "remember me."  I had never had to do that before.  I thought maybe it's a cookie-related thing, like the way I have the cookies set up, but I have nothing whatsoever blocking Edge, and the issue is the same with Edge. Weird.

Well, now, that's weird.  I entered my credentials, unticked the "Remember Me" box, clicked Sign In and, after the page changed it showed me as NOT being signed in.  I then did the same, but left the "Remember Me" box ticked, and everything worked.  That's really weird.

I'll post about this in their "General Discussion" section.

Is testmy.net recognizing Hughesnet as your provider as of late?  It isn't for me.  I'm just wondering if this issue could be related (probably not).

Ah.  I looked for that specifically, but didnt see it.  On testmy's forum?

It's a pain, as it's nice to be able to compare my speeds with other Hughesnet users.  I hope they fix it, wherever the problem lies.

No answer on the post regarding the sign in on testmy yet, I see.  Perhaps CA3LE finally decided to take a nap.  LOL.

I can see my post; it's the last answer (at least right now) under your "No longer detecting my provider?" post. It says it's been posted (was in moderation for a bit).

I see CA3LE tried a fix for the login issue but it didn't work.

Ah, okay.  I see your post on the missing provider thread on testmy.net.  🙂

Even though the login issue isn't fixed yet on testmy.net, I think it's funny that, whatever CA3LE did, it's now signing into the forums instead of defaulting to the home page.  At least for me, it is.   Is it doing this for you, too?  Does it take you to the forums instead of the home page when you click on Sign In after entering your credentials?

" Is it doing this for you, too?  Does it take you to the forums instead of the home page when you click on Sign In after entering your credentials? "

Nope, for me it's defaulting to the home page.  How weird, though, that it's taking you to the forums directly. I hope this gets fixed, though as you may have seen, someone else posted and said s/he wasn't having a problem at all.

Liz
Moderator
In response to GabeU 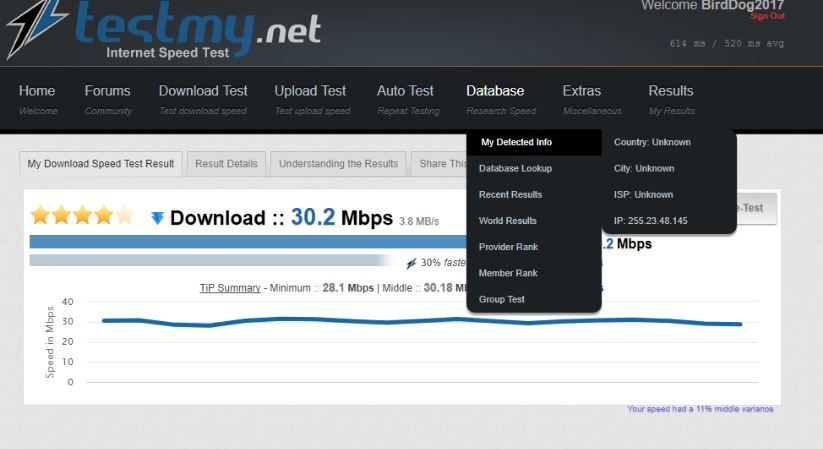 I've tried it with other ISPs (different computers, different sites, different ISPs) and they're also not recognized, so it may be an issue with Tesmy.net.