As you instructed on Twitter, here I am. Ive talked to your customer service people until I'm blue in the face and I want my $325 cancellation fee reversed. I will not stop the Twitter talk until you reverse it, and all your millions of unhappy customers can join me on Twitter to share their stories.
Labels:
0 Kudos
Reply
15 REPLIES 15

Care to elaborate on your story?  Why do you feel your cancelation fee should be waived/reversed?

HughesNetSucks4
Sophomore
In response to C0RR0SIVE
Hi, Corrosive. My story is similar to many other HughesNet customers.
I called HughesNet to gather information about their service. On the phone, the salesperson painted a rosey picture of their service, and use the words, "I GUARANTEE you'll be happy with HughesNet." Well, I wasn't. And my calls to tech support started soon after my service began. I was unable to visit essential websites at time because pages wouldn't load, couldn't watch streaming media because it was so slow, at times it just did not work at all, we would even have to turn off wi-fi on all our phones upon entering our home to make a feeble attempt to get websites to load. Customer service was never able to help fix my problem even after checking speeds, trouble shooting, etc, and they never offered any suggestions beyond the phone call. No offers to have anyone come out to check things. In fact, they concluded "you must be having bad weather" when it was sunny and 75 degrees! We finally got so fed up, we had another company dig and bury cable underground all the way to our home from the nearest town! That's some major frustration, by hey....what else do you do when you need internet to run your business, and HughesNet's oversees customer service reps WILL NOT help you, WILL NOT transfer you to someone who can?!
My husband called twice to cancel service and they wouldn't allow him to bc it was in my name, even though I had added him to our plan not once, but TWICE. I called again, finally, myself, to cancel and to explain my frustrations one last time to what I had hoped would be a sympathetic ear...and I had another rude person overseas tell me i was lying basically, slap me with a $325 termination fee, refuse to let me speak to a manager or anyone in the US that I could understand, and rudely tell me "ITS NON NEGOTIABLE!"
I was guaranteed service that I'd be happy with....not just told, but "GUARANTEED" by the salesperson who signed me up. I entered into this contract, and HughesNet failed to fulfill their guarantee, and they abandoned me, their customer, leaving me with few options. Therefore, CORROSIVE, I feel my $325 fee should be reversed.
2 Kudos
Reply

Interesting story, as there are no guarantees with service...  I am sure once Amanda has your records pulled and investigates, if found in your favor for any reason, she will reverse the cancelation charges on your account.

HughesNetSucks4
Sophomore
In response to C0RR0SIVE
I understand there are normally no guarantees, which is why this girl's choice of words surprised me. <br>Regardless of whether or not there are guarantees, a company should offer a product that works. If it doesn't work, they should offer a solution. If they can't offer a solution, they should allow you to part ways without penalty. <br>In no way should a customer be penalized like this. <br>There's obviously a good reason why HughesNet had to pay out in a massive cl a s s act io n la w suit in 2012. <--- (haha....wow.... those words are not permitted in this community! My comment got vetoed! Sensitive much?! Don't want people to know about it?!?!) With as many upset customers they currently have (and you've got to know this), they'll be very lucky to escape another one.
0 Kudos
Reply

Actually, such things wont happen anymore as everyone is bound to Arbitration.  You will find that many words are not allowed here, as they cause issues.  This website is geared towards helping customers, not geared towards starting things against the company.

HughesNetSucks4
Sophomore
In response to C0RR0SIVE
Well, customers ARENT getting help from the company, obviously. We are frustrated, and angry, and we are talking. I've gone through thread after thread here, seeing customers who are at their whits end, first taking to the phones, getting no help, coming here, still getting no help. I've noticed a common thread among most of you customer service people...arrogance. No one legitimately CARES that there's a real problem here with your product, and the way your customers feel. A company can only last so long like that before it implodes.
0 Kudos
Reply

Obviously, your unhappy with your Hughesnet Service, but from one customer to another, going around the entire community replying to other customers topics/questions and spreading your obvious hatred for HughesNet is NOT going to get you anywhere....except banned/blocked.

I believe @Amanda has already addressed your initial concern and is currently investigating your complaints as she has stated above but if you continue to go around the community running your mouth, I doubt that your going to receive ANY help/resolution with regards to your own personal complaint.

p.s I'm not sure who nominated YOU the voice for ALL Hughesnet customers..but please stop including such words as  'we' 'us' in with your replies!

while this community is primarily used by those customers who have questions/concerns/complaints, it should, in no way, be assumed that ALL Hughesnet Customers are unhappy with their service.

I, personally, have been very happy with our HughesNet service, both as a Gen 4 customer and now as a Gen 5 customer.

It is obvious to me that you have gone around the community picking and choosing which topics to read and reply too...but you may want to go back and look through the many topics (questions/concerns/complaints) that have been quickly resolved to the customers satisfaction.

HughesNetSucks4
Sophomore
In response to bare65

I've been quiet, followed the rules and waited for resolution for months, and nothing has helped. This is the first time I've actually gotten the attention of anyone at HughesNet or been able to chat with anyone other than a customer service rep in another country, so I'd say I'm making progress. My goal is not to make friends with others in the forum, it is to have my needs met.

Glad to hear you're satisfied customer, but I'm not, and as I've said, I'm going to keep doing exactly what I'm doing until someone in customer service credits my account for the $325 cancellation fee they charged me. It's pretty darn simple.

Acutally, yesterday was the first time I had heard about this forum. Amanda instructed me to come here, and here I am.

CORROSIVE - can you tell me more about what a "Senior Instructor" does at Hughes Net?

Amanda
Moderator
In response to HughesNetSucks4

Your case is still open and in my queue, I have been working on it as I can throughout the day. Please note that the constant spam and attempts to bypass our forum filters will eventually result in your forum account being suspended. I will be moving your other posts to another area as they do not add value to the other threads. Our forum guidelines are available both here in our "About the Community" board and in the same location as our legal agreements (http://legal.hughes.com)

HughesNetSucks4
Sophomore
In response to Amanda

It's not spam if i have a legitimate complaint and interest in a forum thread with similar issues to my own. That's absolutely ridiculous and a great example of a big company attempting to censor and silence the voices of those who have been wronged by them.

MarkJFine
Professor
In response to HughesNetSucks4

This is a forum for assisting other customers in a positive manner. Your posts are designed to cause derision and to make veiled legal threats, not assistance. See the difference?

Amanda
Moderator
In response to HughesNetSucks4

I appreciate you waiting for my reply. After reviewing your account history and listening to your calls to us, I do understand why the previous agents informed you we would not be waiving the early termination fee.

Not including the call to switch to a paper bill on 11/15/17 and a call detailed below on 8/27, these are the calls we have from you since the service was activated: 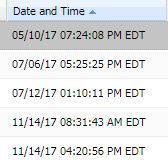 7/6 - Called regarding slow speeds. It was found that the data allowance for the month had been exceeded and the agent provided 2GB of complimentary data. (9m 6s)

7/12 - Called regarding slow speeds. The agent was only able to get through the beginning of triage (testing 3 websites of varying load and was only able to get 1 out of 5 speed tests done). On this call is where the agent saw a read out of bad weather for the zip code of your location. After a request for a manager, the call was put on hold and a few minutes later completely dropped out. (26m 25s)

11/14 - Called to cancel service. The agent did try to explain that they could not waive the fee because there was not sufficient troubleshooting done (it was not completed or close to being completed on 7/12). They also tried to explain that we would not have an issue with waiving the fee if we were given the chance to complete the troubleshooting and escalation process. (22m 5s)

Thank you for posting here! I was able to locate your account and will be reviewing both the previous support notes and listening to call records so that way I have a better understanding of what troubleshooting has been done so far. If a customer is experiencing trouble with our system, we always try to do what we can to fix the problem and get it working. I will post back once I have more information.

HughesNetSucks4
Sophomore
In response to Amanda
Thanks, Amanda.
0 Kudos
Reply