I'm starting a new thread in the hopes that someone at Hughes will notice.

I am trying to figure out where I can check my data usage in real time compared to real time. The change in the design of the meter does not allow for judging what data is left on a daily basis before the warning is sounded. In other words I can't tell if I'm on the verge of exceeding my usage as I'm about to buy a Netflix movie. I didn't include a screen of the meter since it

only gives data used and percentage. The graph line switches positon based on whether the Bonus is added in. No place is that explained but it just helps to add to the confusion. Picture One. Hopefuly you 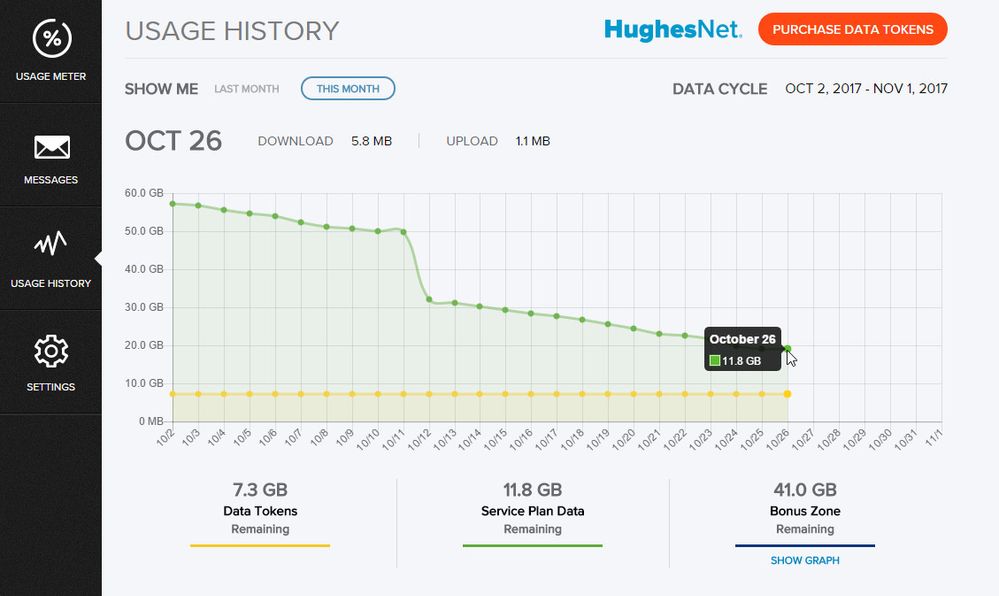 10/26 10:36'll be able to read the down load and up load numbers  right of the date. This was at 10:35 or so and I had been on the computer nealy all day and I assume that number is what I've down loaded. 5.8 mb's is all I've used? That isn't right, not even close. The graph puts the Service line right about 20 gigs available. I'll assume it's the bonus added in. 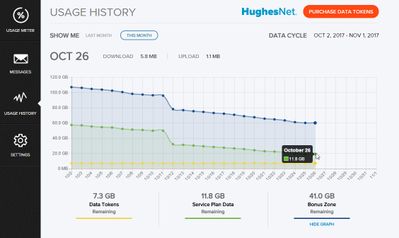 10/26 10:35 pm ONEScreen Two (lost it's number. It's on the bottom) shows the graph when the Bonus data is removed. The green Service data bar drops down to about 10 gigs which is what made me assume it was added to service. Once again my down load and upload are fantastically low.

No matte what meter or graph is used I still don't know if I start a sizable download will I return to find I'm heading for Data Prison. I don't know about anyone else but I think this method of tracking usage is simply ridiculous. I was going to down load a program for a Playstation and if I hadn't fired up my calculator to divide data into days I would be bouncing a bad data check.

What are chances we can get a usable method of  data versus time, the way it used to be? The gentleman who had suggestions had some very workable ideas. For the amount everyone pays per month I don't think it's too much to ask, or is it? My aplogies for improper placement of the photos. I haven't used this site enough to figure it out and it midnight.

Photo Two is larger to make sure the 5.8 mb download can be seen.

The community does have a time-out, I think it's three hours, but the cookie will also expire if you close your browsing session.  This is a security thing because of SSO (Single Sign On), which can make it very easy to access your account details from the community site.

Although this isn't really what you're looking for, if I want to know if I'm running myself up against the wall I just multiply the days I have left in my cycle by the average daily allowance.  My daily allowance is 645MB, as it's a 31 day cycle this time and I have the 20GB plan.  20GB divided by 31 days is 645MB per day.  Right now I have 9 days left in my cycle, and I have about 8000MB of data remaining.  9 days times 645MB is 5805MB, so I'm good.  If the amount I have left was smaller than 5805MB, I'd be in trouble, at least concerning my average allowable daily data amount.

You have the 50GB plan, so your average daily allowance (31 days for you in this cycle, too) is 1613MB.  So, if you have six days left in your cycle, by the average, you should have 9678MB.  If what you have left is more than 9678MB you're good.  If what you have left is less than 9678MB, you'd basically be over what you should have used by now.  Judging by your top picture, it looks like you have around 11GB left, or maybe a little less by now.  That's about 1.3GB of wiggle room, so you're okay.  Again, going by the allowable daily average, you should have about 9678MB left, and you have around 11,000MB, so you're still okay.

I hope I didn't confuse you.

It's a simple bytes left vs. time averaging exercise - and managing to stay under that number.

No meter is going to predict your usage in the future.

No real-time display is going to help you manage future usage either.

Not sure why this is so hard.

To that end, had you read the whole thread I created instead of just adding to it, you'd have seen that I already recommended two things that you keep coming back to:
1. Adding a Daily display to the Cumulative 'remaining' History display.
2. Making the current day in the History display dynamically update to synchronize with the Usage display.

Both are easily implemented in the current code, as I've already done it myself. 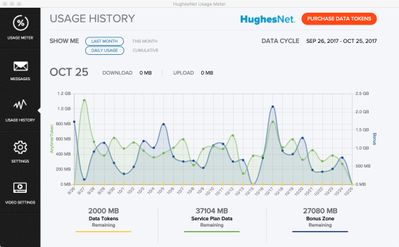 The only thing I'd possibly add to this is a line showing where the average daily remaining amount would be, as a guide.

I did the math but just like computer programming, it's garbage in, garbage out. My My Account read 51.8 gigs used and hadn't updated by 7:30 pm and the Usage meter tally of data used appears to have updated once from 5.1 mb to 51.8 though I don't know when that occurred. That was data used on the 26th. At 3:30 am, on the 27th, the Usage meter did update and to my surprise I had used 1.3 gigs though I thought it would be much lower.

GabeU, the formulation gives me an idea of what I have to stay under to make it to the end of the month but that computation has to be performed every day, several times a day if the use is updated, because use doens't stay static. I may find out the next morning that I used 2.2 gigs the day before. Refigure and find I have to tighten the belt, so to speak.

It appears that everyone has arrived at the same conclusion, sort of. I particularly like MarkJFine's suggestions but is that as far as they will go?

Does anyone else have Data Tokens waiting to be used. No one said anything about them and they would have since their existance on the graph presents a somewhat bizzare result. When the Bonus time line is NOT included in the graph, the token's data is added to the Service data line but not the Plan Data remaining total. I have 10.8 gigs Service left but the bar graph is close to 18 gigs when my 7.3 Tokens are added. When the Bonus data line is added to the graph the scale of the graph changes where the max was 60 gigs, it changes to 120 gigs. When the curser is placed on todays data point, the ballon reads the same 10.8 gigs but the green line rests again at 18 gigs. In other words, the graph lines have no correlation to the info in  the bubble unless you realize that no matter what, Tokens are in cluded in the graph line, not the bubble. Probably not as large an issue for the time it took to type this but it was just another confusing item thrown into the mix. This is why I thought the Usage total was so grossly inaccurate before. There is no explaination of this that I have read so far.

On a slightly different topic but still related; does the Community login time out if unused? Mine appears to be doing that and logging me off just to read direct mail as well as email. Any posts have to be completed in a timely manner or I get a big red 'no authorization' flag. It's definately a hinderance if the data page is to remain open but considering it doesn't update, I guess, what difference does it make?

The community does have a time-out, I think it's three hours, but the cookie will also expire if you close your browsing session.  This is a security thing because of SSO (Single Sign On), which can make it very easy to access your account details from the community site.

Thank you. Only an issue because my login is so slow on both boxes.

Did anyone happen to notice that there is no 10/28 on the Usage History? At least mine doesn't have that date. And with the curser over the dot on the graph for the 27th shows I've already used 750.7 mb. I never logged on from midnight to 2:00 am and the current time in 8:29am on 10/28. So after being logged on for 29 minutes it shows I've used 750.7 which is unusual for the amount of data used since during that 29 minutes I viewed two web pages with no graphics.

Is there a moderator who can find out what happens with data when a full day is missing? Will it not refresh (reload) until 11/2? Will data used all show up on the 27th or the 29th?  I promise I won't argue with you. Just looking for answers.

I responded to a post that the problem I was addressing what fixed, Corrosive answered the question I asked but now I realize that may be misdirecting others to think the data tracking issue was resolved. So if you've arrived here anticipating some method of tracking your data real time, it hasn't been figured out totally yet.