For years we had an older HughesNet 15 GB plan and almost never ran out of data. "Upgraded" to Gen 5 30 GB plan and, over the past year, have exhausted the 30 GB with a week remaining in the cycle almost every month. I'm the only user and haven't changed my  use habits - don't watch movies, etc.  Simply web data use.

While I notice a slight speed advantage with Gen 5, it's nothing remarkable. What bothers me is that despite the claimed speed advantage and doubling my download package, I spend a week, or so, with significantly slower response. According, I regret the "upgrade" and wonder about the system's use monitoring accuracy.

Am just curious if others have a similar experence.

If all you're doing is web related things and not streaming anything, yet you are still running out of data, something's chewing through your data.  I have the 20GB plan and have never run out of data, nor did I ever run out when I had my Gen4 15GB plan.

buddha6
Freshman
In response to GabeU

Thanks. Was familiar with most of what you suggested and had considered much of it. Unfortunately, none were revelatory.

What is most puzzling is that I travel regularly and often go days/weeks without even using the system. I had initally thought of the possibility of unauthorized use of the wi-fi but given that the house is in the VA countryside; my property is gated access; and the system is enabled with a complex password; unless a very bright hacker is hiking thru the woods surrounding the house, I've ruled that out as a possibility.:)

I'll continue to attempt to track it down as it's very annoying.

It's very unlikely that anyone's hacking in to your system.  Most of the time when I see this kind of thing that's not even one of the thing that comes to mind, though it's always good to check, as you never know for sure until you do.

If you're using a Windows based computer try Glasswire.  It will tell you everything that's using data on the computer it's installed on.  It's free, too, though there is now a "trial period" of the premium version which reverts to the more restrictive, but still good enough, free version after ten or fifteen days.  Make sure to also adjust the options, which are to the upper right of the usage circle graphs, to "Incoming & Outgoing" and "External".  That way it's only measuring data that's coming into or going out of your computer and not things being transferred back and forth within itself. 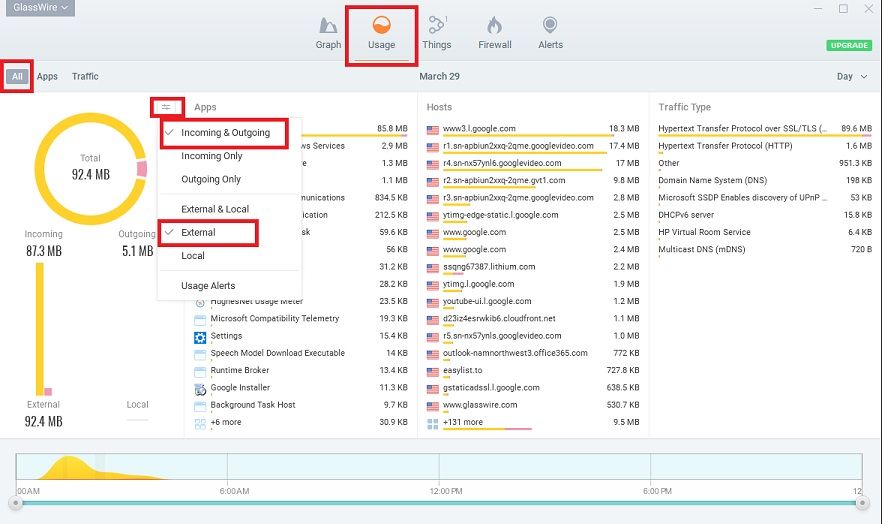 Prior to upgrading to gen5, did you have your own wireless router hooked up to your previous HughesNet equipment? I wonder if some devices are connecting to your HT2000W that may not have connected to your old service (automatically, at least).

buddha6
Freshman
In response to Amanda

Thanks for your thoughts.

I've added a couple of Alexa enabled electric outlets, one wifi extender, and one Alexa Dot since changing over to GEN 5.   I can't imagine they account for any significan data useage. The Dot and one of the electric outlets are in a guest bedroom almost never used.

I've used 14% of the Bonus Bites despite having not used the system but one time during that period.

Obviously something is consuming data but I can't reasonably account for the amount.

I understand you are seeking assistance, however the original poster of this thread appears to have a different issue than what you have posted. Our recommendation if you want assistance is to please create a new thread for yourselves in the Tech Support category as GabeU advised above.

It's been a while since we've heard from you so this thread will be closed. If you still have questions or concerns on this topic, feel free to send me a PM to re-open it or create a new thread.

Hmm,  this wasn't my thread.  I was replying to someone else with the same problem with Gen5 that I've been having though.

I know most people here are just trying to help, and you are one of the biggest posters      No offence meant, but It sometimes seems to me that I've found the Hughes customer law suit legal defence team.

The previous message wouldn't post until I removed the words "cl*ss acti*n from in front of law suit.  Those words are forbidden here,

Hey, I know I'm paranoid, but am I paranoid enough?

It is a private site, so they can forbid whatever words they want.  Also, the type of action you were writing about is not allowed by Hughesnet (or Xfinity, or Verizon, or American Express, or many,  many others -- Hughesnet was not even the first company to come up with the idea).  Binding arbitration is now pretty much standard and is what you get if you have a grievance.

Hmm,  this wasn't my thread.  I was replying to someone else with the same problem with Gen5 that I've been having though.

I know most people here are just trying to help, and you are one of the biggest posters      No offence meant, but It sometimes seems to me that I've found the Hughes customer law suit legal defence team.

You're free to reply to any thread you like, regardless of whether it was started by you.  You can reply to threads if you'd like to help or just add your two cents.  You replying to this thread was fine.  It's the thread itself that is becoming a problem, not you replying to it.

If the Alexa product line behaves like the Google line of similar products, then there is a lot of traffic going around. The devices have a 'discovery' technology which makes them very talkative, meaning all your devices that can talk to each other to control one another will talk to each other... all day, everyday.

As an example your cell phone app to control Alexa outlet, play music on your Dot, or your Dot being told to turn on the outlet  (whether actually being told to do something or not) will just be constantly going back and forth over the network making sure they can still 'hear' each other. Not only can this account for data usage, but in my own personal experience with Google products, it can totally drag your home network performance through the mud (that was a horrible weekend for me which only involved 2 android phones and a google home Mini :'( ).

Users who have Google products have experienced this in terrible ways, one user from Reddit said their Chromecast used almost 15GB just rotating the Google 'Backdrop' feature on their TV, even when they were on a totally different input.

I'm not saying this is exactly what could happen to you, and not trying to make it seem like your devices can't be used, but they can be tamed. When you say the Dot/outlets are almost never used, do you mean no one actually tells them to turn on/off or they aren't connected to the wi-fi? Do all your phones have Alexa apps or are cast-enabled? I'll need to pull some event logs to get an idea of how much chatter is going on, but if you don't mind just temporarily powering off the Alexa things and see if data usage slows down at least for an afternoon?

Willow
New Poster
Got HughesNet in February 2018 because nothing else is available but satellite. In two days half of our data is gone. Called them and they said when any of our phones or tablets are connected to WiFi they take data even if we are not using them. We can’t eve watch Netflix at night. It buffers constantly and the picture is blurry. All they said is run speed test and take screenshots so they have proof there is a problem. We are stuck with this company for two years. They lied when we signed up tells us 20gb was plenty to stream every night and use our computer and phones. Will go to Verizon and get a jet pack and only use this service for the bare minimum. Not going to upgrade to more data. This company is very bad
4 Kudos
Reply

Here's a PSA for any one considering Hughes Net services. DON'T do it! We live in a rural area and had Pixius for a while and had issues with them. I was on the phone with the sales rep for over one hour to ensure that I was getting a better service. Literally for the first 2 months we had service and then it disappeared / vanished. We called and they gave us a few extra tokens of data. For 20 gigs of data went from lasting 20 days and now it's gone in ONE DAY!!!!! Their customer service is totally lacking any helpfulness. We are ready to pay the early termination fee. Do yourself a favor and don't even consider using Hughes Net.

HughesNet's customer service department is not your personal IT department.  It is neither their responsibility to figure out which of your devices is burning through your data, nor why.

However, if you'd like help in figuring this out, please start a new topic in Tech Support.

Lastly, it's more than likely that your 20GB of data went from lasting twenty days to lasting one day because new customers get their data allotment reset constantly during their first twenty days of their service.  This is done as a courtesy by HughesNet, and it is explained in the Welcome email.  Paying attention to your data usage, which is very important for a service with any type of data cap, should have also clued you in to something going on during those first twenty days.

Just signed up with Gen 5 - we have been at the house 5 days in the last 3 months and blew through all data 30GB every month not even being there.

One thermostat.  That's all.  We disconnected roku, DirectTVs, no ipads even at the house.

If you'd like help in determining what it is that is using so much of your data please start a new topic in Tech Support.

Calling your state regulatory agency because something on your end is chewing through all of your data isn't going to do you much good.

Bspur1
Spectator
In response to GabeU
Everyone I’ve talked to says the same thing! Just admit HughesNet is cheating it’s customers and stop being an **bleep**
0 Kudos
Reply

HughesNet sells a data package.  Neither how quickly someone uses that data, nor what on someone's system is using it, is HughesNet's responsibility.  HughesNet is not cheating anyone out of their data.

Secondly, please refrain from using foul language on this site.  It's immature and there's no need for it.